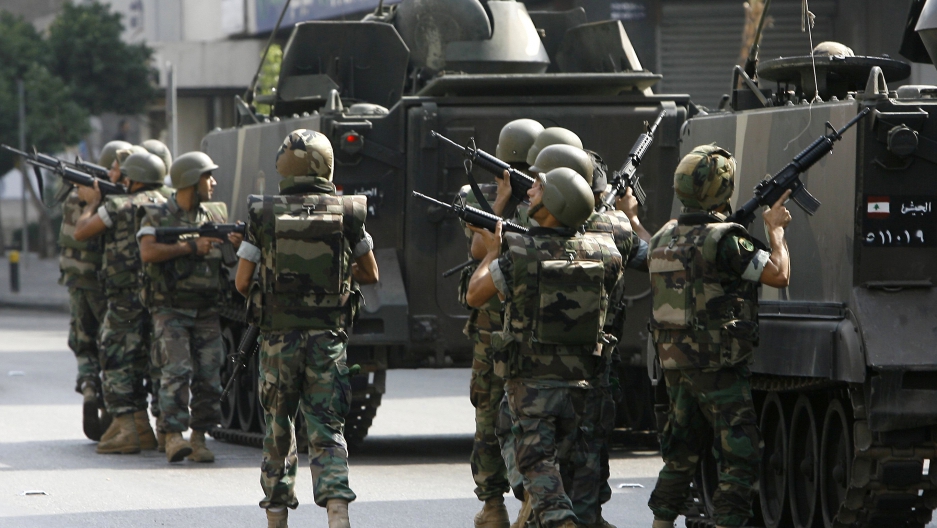 Lebanese soldiers patrol the Corniche al-Mazraa neighbourhood of the capital Beirut, on October 22, 2012. The army said it was determined to restore order in Lebanon, roiled by growing political tensions linked to Syria after a top policeman was murdered and former premier Rafiq Hariri called for the government to step down.
Credit: AFP/Getty
Share

Lebanese soldiers fired at Syrian aircraft after the latter crossed into Lebanon's airspace on Monday.

The military fired anti-aircraft guns at two Syrian helicopters that had fired four missiles in a mountainous border area close to the eastern Lebanese town of Arsal.

It is the first time Lebanese troops have engaged the Syrian military since the beginning of the uprising nearly three years ago.

The move signals an increased willingness for Lebanon to police its borders and comes at the heels of a $3 billion donation from Saudi Arabia to boost the Lebanese military.

Attacks inside Lebanon have jumped in recent years, likely due to sectarian tensions unleashed in Syria.

Last week, a car bomb killed the former Lebanese ambassador to the US and an outspoken critic of Syria.

Arsal has a mostly Sunni population that has supported the uprising against Syrian President Bashar al-Assad, whose Alawite sect is a part of Shia Islam.

The town has recently been flooded by refugees of the war, mainly in makeshift camps.

The Syrian military has battled rebels near the Lebanese border and believe that Arsal is a supply route to supply anti-Assad militants.

More from GlobalPost: Lebanese army gets $3 billion from Saudi Arabia amid regional tensions