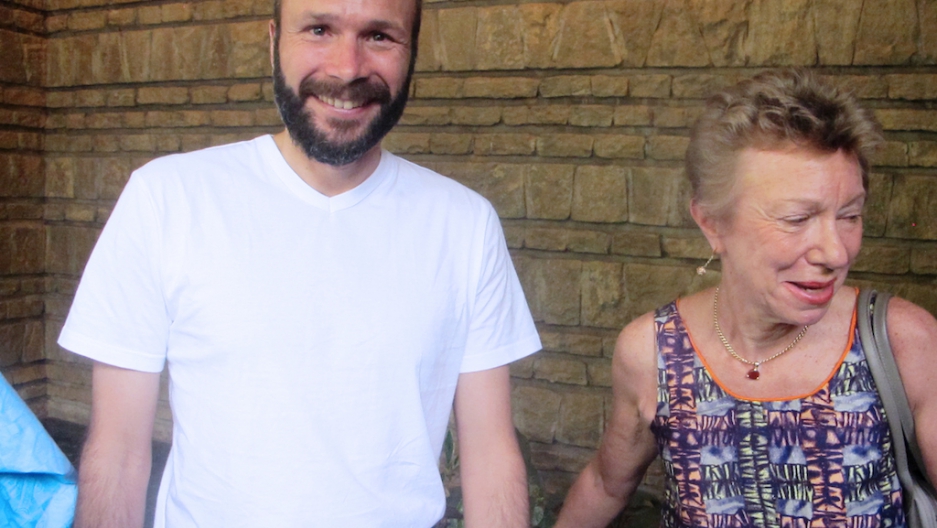 French Roman Catholic priest Georges Vandenbeusch (L) smiles on December 31, 2013 next to French Ambassador to Cameroon Christine Robichon as he arrives at the French ambassador's residence in Yaounde. Vandenbeusch, 42, kidnapped on November 13 by heavily armed men who burst into his parish at night in the far north of the central African country and reportedly took him to neighbouring Nigeria, was released on December 31 after a six-week ordeal.
Credit: Reinnier KAZE/AFP/Getty Images
Share

A French Catholic priest kidnapped in the Cameroon was released early Tuesday, after he spent weeks in the custody of Islamic militants in the far north of the country, near the Nigerian border.

Georges Vandenbeusch, 42, was kidnapped on November 13th about 18 miles from the Nigerian border, and appears to have been taken into Nigeria by his captors. Nigerian militant group Boko Haram has claimed responsibility.

French President Francois Hollande commended authorities in both Nigeria and in the Cameroon for helping to secure the release of Vandenbeusch, and he commended Cameroon President Paul Biya for his "personal involvement" in the matter, according to AFP.

"I am in good health and so grateful to those who worked for my release," he told reporters before being taken to the French embassy, wrote Reuters."(It was) terribly boring. I spent seven weeks with nothing to do, pacing in circles in my tent under a tree without a book to read or a person to talk to."

France has stated that they did not pay a ransom to secure the release of Vandenbeusch, in an effort to dispel rumors that such payments have been made in the past.

“It’s long-term, very difficult team work” to free a hostage, said French Foreign Minister Laurent Fabius of the case, according to the Associated Press. “There were discussions, of course,” he added. “That is where Cameroon is extremely useful."

Boko Haram, which translates in the Hausa language into "Western education is forbidden," has been held responsible for over 790 deaths in 2012, and many others in 2013.