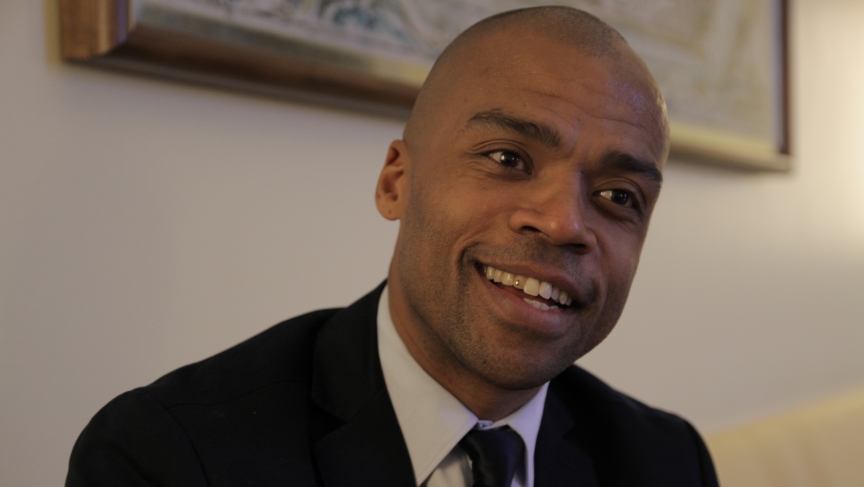 Jani Toivola is making waves as a Finnish politician.

Here’s the story of a charismatic politician, the only child born to a white mother and a Kenyan father whom he has met just once.

As an adult, he takes a transformative trip to Kenya, where he gets to know his father’s family. Fast forward a few years when he enters national politics during a landmark election.

Until he was in his mid-30’s, the entrepreneur, actor and dancer was a celebrity in this country of 5.5 million. He’s been the host of Idols, Finland’s version of American Idol, a contestant on Finland’s version of Dancing With the Stars, and he’s been a spokesman for the Finnish Tourist Board, explaining what’s cool about Finland.

But before all that, Toivola studied acting at the same school in New York City where Al Pacino, Robert DeNiro and Sarah Jessica Parker honed their skills.

“When I was 15 or 16, there was not a single black actor in Finland. ... There was never really anybody saying ‘This is not for you,’ but at the same time, there was nobody in this society saying, ‘This is for you,’” he recalled.

Until Toivola got elected in 2011, there wasn’t a single black member of Finland’s parliament. And there were very few gay ones, too. It wouldn’t be a stretch to call Toivola a blazer of many different trails.

Now he’s in a new film called Heart of a Lion. It debuted at the 2013 Toronto International Film Festival and it’s been a hit in theaters across Finland.

“It’s about a young boy growing up in Finland, but having a multicultural background,” Toivola says. “In some sense, I could even sense that it’s my life story.”

Toivola plays the father of a young boy whose white mother is now dating a Neo Nazi. In short, it’s complicated.

“But at the same time, we laughed a lot. It’s also very much of a comedy," Toivola says. "I think it’s also important to show that human side of these very difficult issues. The most crucial point is, if we are able to change our thinking and reach out to something new when it’s necessary, for our own well-being or for the well-being of people around us.”

Heart of a Lion is the first Finnish feature film to address race relations. The storyline was partly inspired by the rise of the right wing, anti-immigrant political party, the True Finns. The party isn’t especially kind to people who aren’t white.

Finland is over 95 percent white, making it one of the most homogeneous countries in Europe. Toivola says Heart of a Lion offers a glimpse of how the country is changing.

“The film is dealing with issues that I’m also dealing with as a politician,” he says. “It’s quite obvious that we are dependent on immigration. We need, in the future, more and more people, for example, in terms of employment. The birth rate is going down, and the percentage of elderly people, it’s quite high and it’s getting bigger. So it’s one of the biggest political debates right now, how can we open the gates more?”

Finns often compare themselves to their neighbor, Sweden. The Swedes have been dealing with immigration longer, and have generations with multicultural backgrounds. Toivola and Heart of a Lion director Dome Karukoski note that Finns love to gripe about everything being better in Sweden. But Karukoski cites one exception.

“Everything is better in Sweden,” Karukoski says, “but one thing that is better [in Finland is] that we have Jani Toivola.”