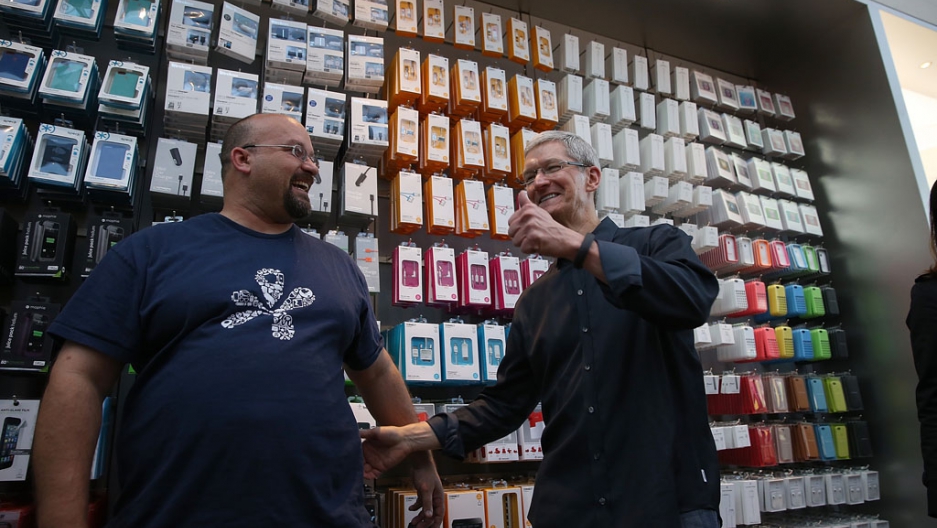 Apple CEO Tim Cook, right, meets a customer purchasing the new iPhone on September 20, 2013 in Palo Alto, California. Apple launched two new models of iPhone: the iPhone 5S, which is preceded by the iPhone 5, and a cheaper, paired down version, the iPhone 5C. The phones come with a new operating system.
Credit: Justin Sullivan
Share

Apple on Tuesday denied knowledge of software reportedly created by the National Security Agency to allow surveillance of iPhones.

One of the products, known as DROPOUTJEEP, according to NBC News, specifically targeted the iPhone and would allow an NSA staffer complete access to and control over the target's Apple device.

Der Spiegel referred to the software as a "trojan," or malware that helps hackers get into protected systems. The report did not suggest that Apple had cooperated with the NSA on so-called backdoors.

In a public statement, Apple denied knowing about any such software or cooperating with the NSA:

"Apple has never worked with the NSA to create a backdoor in any of our products, including iPhone. Additionally, we have been unaware of this alleged NSA program targeting our products. We care deeply about our customers’ privacy and security. Our team is continuously working to make our products even more secure, and we make it easy for customers to keep their software up to date with the latest advancements.

Whenever we hear about attempts to undermine Apple’s industry-leading security, we thoroughly investigate and take appropriate steps to protect our customers. We will continue to use our resources to stay ahead of malicious hackers and defend our customers from security attacks, regardless of who’s behind them."

When Appelbaum made his announcement about the software at a German hacker's conference on Monday, he said the NSA capabilities were "even worse than your worst nightmares."

He added, "What I am going to show you today is wrist-slittingly depressing," according to the Associated Press.