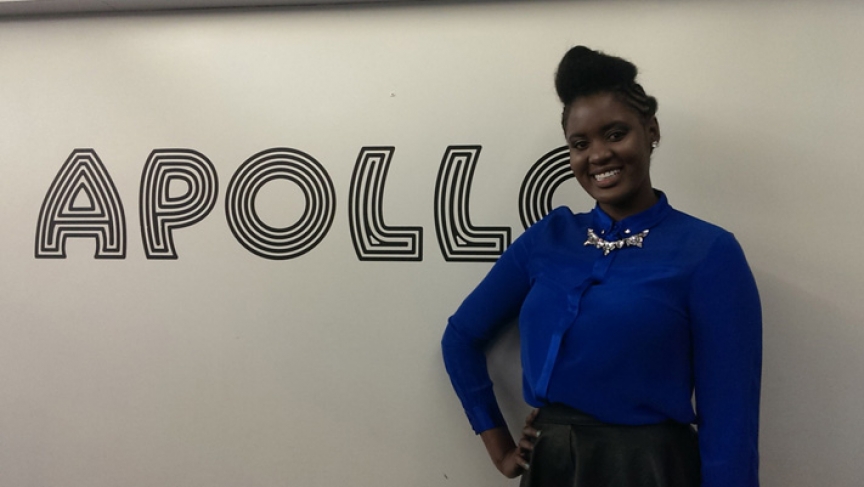 Kamilah Gibson stands backstage at the Apollo before the finals.

Kamilah Gibson is a grad student from the Bahamas. I met her while she was doing research for her thesis on "Making it in the YouTube Generation."

We got to talking about how hard it is for new musicians to figure out what their first move should be. I'd been a singer in New York City for many years, and could relate.The music scene here is highly Balkanized. It's so easy to get lost.

Then I learned Gibson had a personal stake: She is an aspiring singer, and she had recently made her big debut, at Amateur Night at the Apollo.

Amateur Night is a variety show that has been running for almost 80 years now — so long that, to locals, it can almost feel like it’s hiding in plain sight. But when Gibson spotted an ad for auditions in the subway, it jumped out at her. Like a lot of things here, though, the process was still super-competitive.

“We got up at 3 in the morning and got there at quarter to 5, at which point I was 86th in the line,” Gibson said.

It was also nerve-wracking.

“I did Alicia Keys and Drake's 'Unthinkable' on the guitar and I got through not even the first verse of that and they're like, ‘OK, thanks.’ Very straight-faced. And I'm like, Oh no! They don't want me. I'm going home,” she said.

She didn't go home; she got in. Suddenly, she was singing for a sold-out audience of 1500.

“My heart was beating so hard I could see my dress shaking,” she said. “It is a frightening thing to just get on that stage. So many wonderful, amazing, legendary people have been on that stage, just to be part of that, to rub the same tree stump that they do, it's phenomenal.”

Although her own musical style is far more influenced by, say, Nina Simone than Bahaman rake n'scrape, Gibson is still acutely aware of how easy it is to pigeonhole a singer from the Caribbean.

“I'm from the Bahamas and there are three Bs south of Florida that people usually remember: Bahamas, Bermuda and Barbados. When people think of the Caribbean they think, Oh Rihanna! Bob Marley! And nobody else exists, when there's just a wealth of talent coming out of the region with so many nuanced differences,” Gibson said.

But the audience at the Apollo recognized her talent. She didn't just win the first round — she made it all the way to the finals.

When Gibson took the stage the night of the finals, a thrilled hush went through the crowd. You know the kind — when someone starts really singing.

The audience loved her voice, but I could hear some booing in a distant corner, before a louder chorus of cheers drowned it out. Gibson later found out the people booing her were fans of the group that performed just before her. If the boos get loud enough, a tap-dancing executioner chases you off the stage.

I don't think I could have handled Amateur Night's form of direct democracy. Gibson is definitely made of stronger stuff.

But in the end, she didn't make it to first place.

The Apollo calls itself "the soul of American culture." But the top three winners were a pair of street-style dancers from Japan, followed by a beat boxer from Korea, and a soul singer from the Bahamas.

“It's a little more disappointing than I thought it would be, but I'm here,” Gibson said. “I made it this far. That's pretty amazing.”

It was. And hey, Gibson just made the first step toward staking out her own ground, somewhere between Bob Marley and Rihanna. I talked to the Japanese dancers after the show, too, and they told me something pretty amazing.

They said they'd been flying back and forth from Tokyo for all four rounds of the competition. I asked them ‘Why go to so much effort?’ And they told me there was nothing like Amateur Night in Japan; no Japan Idol. They just wanted the title. This was their dream.

I'd forgotten that's how it goes being a musician in New York City. When you're up on stage, it's easy to forget that your dream is everyone's dream — from Harlem to Tokyo.