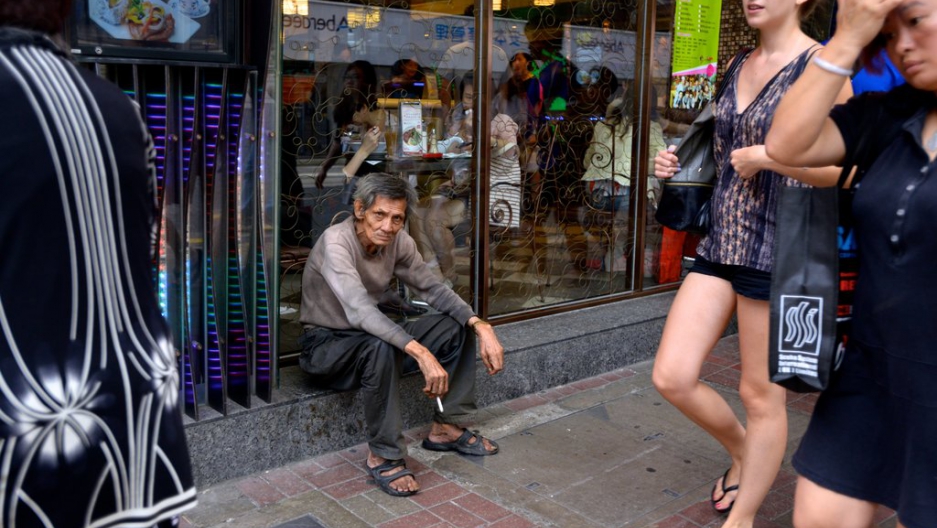 A man smokes a cigarette outside a restaurant in Hong Kong on September 28, 2013. The same day, Hong Kong announced its first benchmark to measure poverty and found almost 20 percent of residents live in such conditions, a move hailed as a step towards tackling worsening inequality
Credit: Alex Ogle
Share

NEW YORK — Viewed from the towering heights of America’s financial capital, there are reasons aplenty to celebrate the coming new year.

The official unemployment rate — which peaked at 10 percent in October 2009 — fell to 7 percent by the start of December, a level that prompted President Obama to claim the US economy is “ready for lift off” in 2014.

Perhaps, but Spaceship USA seems intent on leaving an awful lot of people behind on the launch pad.

To be sure, the macroeconomic news looks promising: consumer spending is up, the S&P 500 stock index is trading at record levels, the real estate market is recovering, and inflation — which some economists predicted would be in the stratosphere by now — is worryingly low, if anything.

These indicators will cheer the heart of American business and financial executives, as well as investors who make their money on interest or dividends. They are the classic signs of an economy moving ahead at a moderate but sustainable pace. Given what has passed for good news since 2008, this is good news.

But the deeper picture remains disturbing, particularly for the hard-pressed middle class. That is because the new wealth being created by the recovering economy is again going disproportionately to the top 10 percent of society.

The inequality gap — a measurement of the share of national wealth that goes to the top stratum of American households versus those in the middle and bottom — has resumed its growth after a short break brought on by the losses investors took after the collapse of Lehman Brothers in 2008.

Emmanuel Saez, an economics professor at UC-Berkeley, has tracked this gap for years and now predicts that 2013 will mark a significant uptick in the gap as middle class incomes continue to stagnate but real estate and stock market gains for those in America’s wealthiest households soared. In effect, he says, his most recent data suggests the top stratum is taking home as much of US national income today as it was in 1928, just before the crash that started the Great Depression.

A report from the Congressional Budget Office (CBO) in December confirmed the larger trend. Economists slice the US income picture into five parts, with the poorest family in the bottom 20 percent, and the richest at the top.

Since about 1978, the incomes of the bottom and middle of American households have stagnated when adjusted for inflation, while that of the top 20 percent have risen significantly, the CBO reports.

Further, the CBO report and studies by the Pew Research Center eviscerate one of the political right’s canards about income inequality statistics. This is the idea that, because the rich pay more taxes, the picture isn’t that bad if “after-tax” income is taken into account.

To the contrary, the picture worsens considerably, primarily because most Americans cannot rely on loopholes and complex tax reduction schemes to lower their exposure. The Pew research shows that, measured before tax, the US ranks 10th most unequal on household incomes among the 34 members of the Organization for Economic Cooperation and Development (OECD). Compute this in “after-tax” income and the US soars to second most unequal. Only Chile was more unequal.

If there is a silver lining, it may be that even those in the rarified world of global finance have begun to address the issue. Some still dismiss inequality as irrelevant, an increasing number see the trend as a real threat to prosperity and even political stability.

In effect, the absence of income growth among the vast majority of Americans, coupled with the fact that it is ever harder to move up the economic ladder in the United States, represents a truly grave threat to American prosperity.

"Making sure that there is growth, that there is adequate redistribution through various systems, is important,” IMF Managing Director Christine Lagarde said. “There is a clear indication that rising inequality leads to less sustainable growth.”

Lagarde, a former Goldman Sachs banker who heads the world’s most important international financial institution, cheerily told Americans on NBC’s Meet the Press in December that the IMF is upgrading its projection for US GDP growth in 2014 from 2.6 percent to something more like 3 percent.

But Lagarde also noted that while US unemployment had fallen, US employment participation — the percentage of the population that is either employed or looking for work — has been stagnant for years. While some of this reflects a larger number of retirees as the baby boom drops out of the workforce, a more important segment are those who lost jobs in the financial crisis and have never managed to win one back.

“What we need to see is a higher participation rate,” Lagarde said. “Participation means the number of people who actually join the job market and get a job. That number has not moved up significantly.”

Nor has there been an improvement in another structural problem: the erosion of social mobility in American society measured by dozens of independent studies since the late 1990s.

Together, this is the one-two punch of inequality, ensuring that the children of the rich will enjoy advantages almost impossible for those in lower strata to match.

In 2011, Alan Kreuger, then chairman of the White House Council of Economic Advisors, plotted income inequality statistics against measurements of social mobility and compared the United States and other industrialized economies.

The resulting graph — dubbed the Great Gatsby Curve — showed the US, UK and Italy in a rarefied league of their own when it came to ensuring that the rich continue to get richer.

 Solutions to a trend that took over three decades to make an impression on global financial policymakers will doubtless not be found overnight. Tax policy has proven a weak (and possibly politically unrealistic) approach. Social transfers — that is, benefit programs like college loans, investments in better schools, measures to lesson excessive and unexpected health or housing costs — probably hold out more hope for leveling the playing field.

But the country has not said unequivocally that a level field is what it wants. As much as the grassroots Tea Party and Occupy Wall Street movements may have reflected a similar disgust at the misconduct of the financial elite, the prescriptions they offered (when, indeed, such a prescription was offered) varied enormously.

For 2014, those concerned about income inequality who want to sleep at night would do well to focus less on a magic bullet solution and simply be glad that there is now, finally, a public debate. If any solution will be found, it must be forged on that anvil.