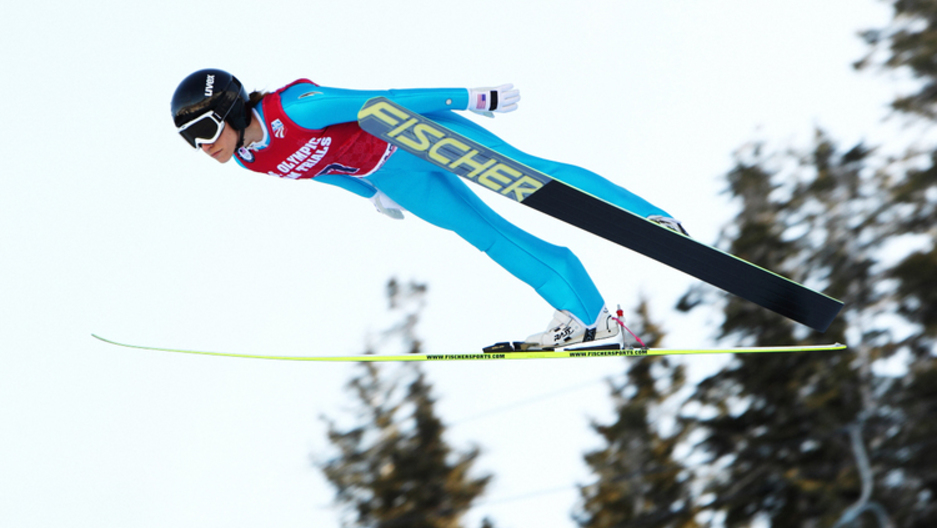 Women have been ski jumping since at least 1911 when an Austrian Countess took flight in a skirt. In those early years, most women had to disguise themselves as boys to take to the hills.

Things improved for women, but they were never allowed to compete at the main event, even when they were putting up better jumps than the men. Heading into the 2010 Winter Games in British Columbia, US ski jumper Lindsey Van held the record — among both men and women — for the longest jump on the “normal hill” in Whistler.

It took an arduous, 15-year struggle, and legal fight, to finally win inclusion at the Olympics. Sunday, 26-year-old Jessica Jerome of Park City, Utah, became the first-ever American woman ski jumper to qualify for an Olympics. She took first place at the US Olympic Trials in her hometown. In her winning jump, Jerome took off traveling about 55 mph and flew nearly the length of a football field.

“It’s a little strange, I don’t really consider myself a pioneer. When I was younger, there were girls — who have retired from jumping — who I sort of considered the pioneers. And I’m sure they consider the generation before them pioneers,” Jerome said.

Jerome grew up skiing most winter weekends. At age 7, she knew she wanted to be a ski jumper. “I remember with my younger brothers, we liked to duck off the trails and go hit jumps and bumps more than we liked to do the downhill parts,” she added.

Her parents initially didn’t want her to try the high-flying sport, but eventually became her biggest supporters leading the battle for female inclusion in the sport. Jerome’s mother, Barb Jerome, insisted that her daughter shouldn’t be limited in what she could accomplish. The 2012 documentary Ready to Fly shows how Jerome’s mom convinced her dad to take action. Peter Jerome bought the book Non-Profits for Dummies and soon founded the association, Women’s Ski Jumping USA.

As the women’s sport gained momentum, active and retired ski jumpers from five countries filed a discrimination lawsuit with the British Columbia Supreme Court, demanding the sport be included in the 2010 Vancouver Olympics. Their effort failed. A Canadian judge agreed with the plaintiffs, but said it was up to the International Olympic Committee to do something about it.

Women were not allowed to compete at Whistler in 2010.

“To become an Olympic sport, a sport must be widely practiced around the world, universal and have a big appeal," said Jacques Rogge, then president of the IOC, in a 2009 interview with the CBC. "There is no discrimination whatsoever. They did not pass the technical mark. That will change in the future. We have no doubt about that. But today they're not ready for it."

That day came in 2011, when the IOC announced that women could compete on the normal hill in Sochi, alongside the men. And Jessica Jerome now has the coveted first slot on the US Olympic team to head to Russia.

“We showed them that we could jump far, and we could put on a good show and were great athletes,” Jerome said.