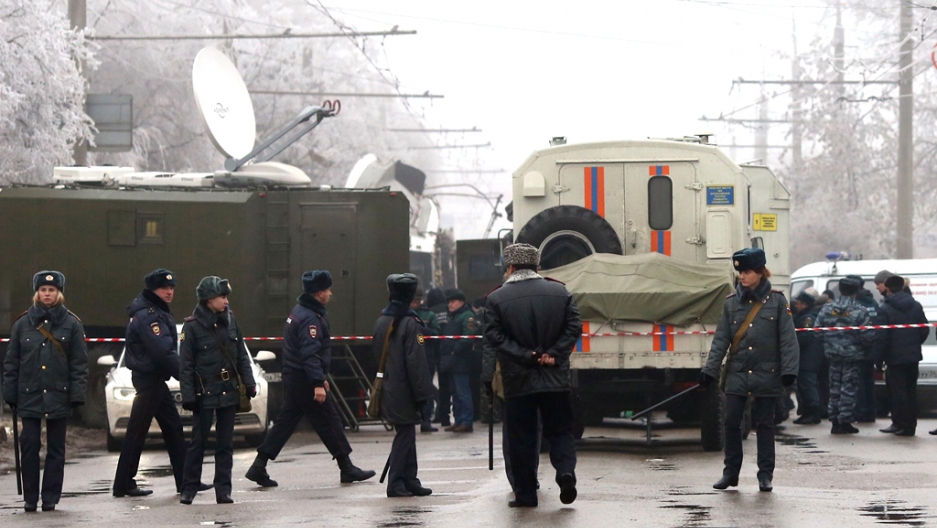 Russian policemen guard the site of a deadly bombing on a packed trolleybus in Volgograd on December 30, 2013.
Credit: AFP
Share

The Russian city of Volgograd has been hit by two deadly suicide attacks in as many days.

Coming just six weeks before Russia hosts the 2014 Winter Olympics, the attacks have raised security concerns about the venue of Sochi, about 400 miles southwest of Volgograd.

The Economist noted that the attacks have plunged the city, known as Stalingrad until the 1960s, into "a state of terror."

During his New Year's address on Tuesday, Russian President Vladimir Putin mentioned "the inhuman acts of terror in Volgograd" and warned that "terrorists" would face "total destruction."

As the Associated Press reported, many bus routes link Volgograd to the restive North Caucasus, where insurgents have been fighting to establish an Islamic state for nearly two decades.

"Russian authorities have been slow to introduce stringent security checks on bus routes, making them the transport of choice for terrorists in the region," the AP said.

The latest attacks — at a train station and on a trolleybus — have left a city of one million afraid to take public transportation.

A destroyed trolleybus stands on a street in Volgograd on December 30, 2013. (AFP/Getty Images)

Volgograd holds more symbolic value as a "hero city," the site of the famously bloody battle that became the turning point in the USSR's fight against Nazi Germany in WWII.

"Volgograd, a symbol of Russia's suffering and victory in World War II, has been singled out by the terrorist leaders precisely because of its status in people's minds," Dmitry Trenin, head of the Carnegie Endowment's Moscow office, said on the organization's website.

Although it was renamed Volgograd in 1961 after Soviet leader Nikita Khrushchev recognized the brutality of Stalin's regime, the city's former name is temporarily restored for special occasions. Despite a growing number of Russians saying they respect Stalin, he still inspires hate among Chechens, who faced mass deportation under his rule.

A giant monument in honor of those who died in the Battle of Stalingrad during the World War II, in the Russian city of Volgograd. (MIKHAIL MORDASOV/AFP/Getty Images)

The North Caucasus region lies to the southeast of Volgograd. The International Crisis Group said in September that "armed conflict in the North Caucasus is the most violent in Europe today."

The latest bombings follow threats from Chechen rebel leader Doku Umarov of new attacks in Russia before the Sochi games, although no one has yet claimed responsibility.

The ICG's Caucasus expert Ekaterina Sokiryanskaya said the latest attacks also follow a new trend. While earlier suicide bombings were generally carried out by Chechen women, the latest were carried out by jihadists from Dagestan — some of them ethnic-Russian, making them harder to identify.

Officials have blamed Sunday's attacks on a young woman from Dagestan, while saying a male was responsible for the blast on Monday.

The attacks, which have claimed 34 lives, were the deadliest Russia has seen since a January 2011 bombing in Moscow that killed 37 people.