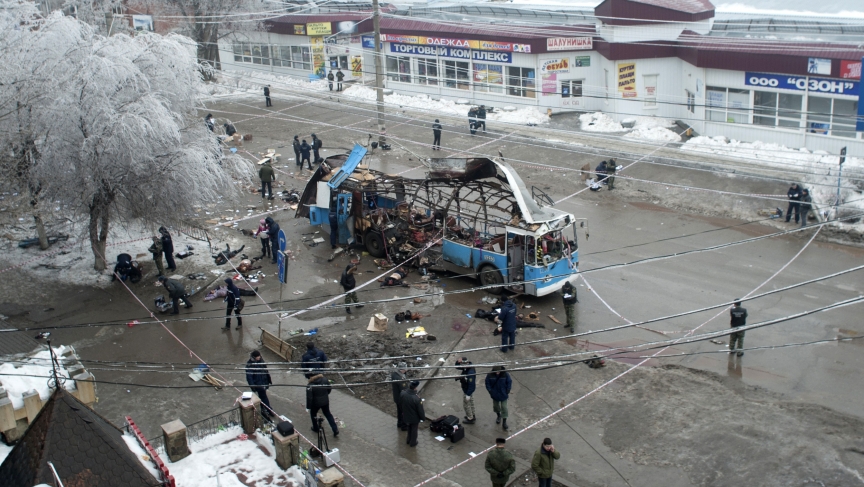 A suicide bomb blast ripped a trolleybus apart in Volgograd on Monday, in the second deadly attack in the southern city in two days.

No one has claimed responsibilty yet for the twin suicide bombings in the southern Russian city of Volgograd over the weekend. But Russia has a history with terrorism.

There have not been any major attacks in Russia proper for a couple of years. But prior to that, attacks were relatively common and the perpertrators were almost exclusively Muslims from minorities in southern Russia.

A low-level insurgency is continuing in the Caucasus Mountains, which form Russia's border to the south. The mountains are home to dozens of ethnic groups, large and small. Almost all of those on the Russian side of the frontier are Muslim. And almost all of them have grievances with Moscow.

The Muslim minorities in the north Caucasus are angry because of Moscow's long history of oppression. The area is under-developed; there are few jobs, and young men can lose hope of ever having a normal life. If they move into Russia proper, they will likely encounter discrimination in jobs and housing.

A handful of individuals are attracted to the violent extremism of Islamic radical groups, which are currently under the umbrella of an organization calling itself the Islamic Emirate of the Caucasus. It is only a handful of individuals who are drawn to terrorism, but it doesn't take many to cause a lot of trouble.

In July, the leader of this Islamic Emirate, Doku Umarov, called on his supporters to do everything possible to disrupt the Sochi Olympics. Sochi is itself on territory that used to be home to many Muslims, but was ethnically cleansed by the Russians in the 1860s.

The best known of the ethnic groups in the north Caucasus is probably the Chechens, who have fought two brutal wars for independence from Russia since 1994. Those wars are estimated to have cost the lives of 300,000 Chechens, about a quarter of the population, as well as about 15,000 Russians, mostly soldiers. The Chechens declared independence as the Soviet Union was disintegrating, but that independence was never accepted.

The Chechens had no love for the Soviet Union, having endured terrible repression under Stalin during World War II. He suspected they were collaborating with the Nazis, or that they might. The entire Chechen population was arrested and deported to the deserts of central Asia. They were not allowed to return for years.

But the mistrust and hatred between the Caucasus peoples and Moscow has even deeper roots. About 200 years ago, the region was loosely under the influence of the Turkish and Persian empires. But Russia was expanding and the Muslim powers were weakening, and Moscow was able to claim the land. But the people fought back for decades. The Russians exterminated or drove out the Muslims along the coast and brought in Christian settlers from the rest of Russia.

Chechnya is relatively quiet nowadays, the insurgents believed to have spread into the neigboring regions of Dagestan and Ingushetia, where there are sporadic attacks on security forces. A report from the International Crisis Group last year warned that continued ethnic, religious, political and economic grievances could bring increased tensions in the North Caucasus region. "The killing," the report said, "is unlikely to end soon."