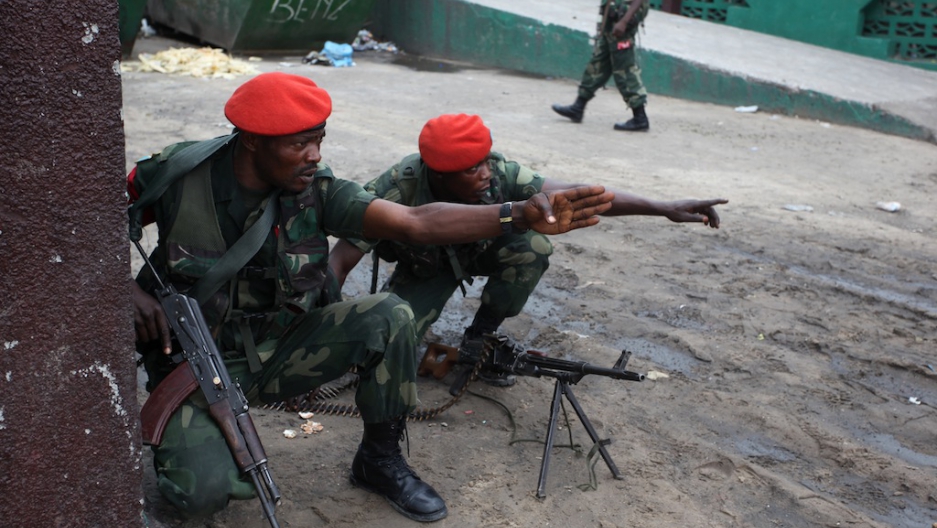 Military police gesture near the state broadcaster RTNC as gunfire erupted on Dec. 30, 2013 at the premises of the broadcaster in Kinshasa.
Credit: Stringer
Share

The Democratic Republic of Congo's army repelled on Monday a wave of attacks on a state TV station, airport and army bases in the country's capital city of Kinshasa.

Information Minister Lambert Mende said the situation is now under control and 46 attackers were killed. Officials said 20 more had been arrested.

Government officials said the attackers were untrained young people wearing civilian clothes who appeared to be making more of a political statement than truly attempting to seize power.

Mende also said those who attacked the Radio Télévision Nationale Congolaise (RTNC) station were armed with weapons such as knives and that there was "no chance of them even to maintain their positions, even for a single hour."

The gunmen seized the station and took a number of journalists hostage.

"People were frightened when security personnel were firing against these attackers," the minister told the BBC's Focus on Africa radio program after visiting the RTNC headquarters.

He said 16 attackers were killed at the airport, 16 at the army bases and eight at the RTNC offices. About 70 people in total participated in the attacks.

One local MONUSCO (the United Nations peacekeeping mission) staff member was wounded during the shooting but is in stable condition.

"These are terrorists, you can't call them anything else," Mende said.

Most residents of the African country knew the attack was under way when they saw the attackers burst into the RTNC studios when the host of morning show Le Panier was in mid-sentence live on the air.

They had time to identify themselves as devotees of a local prophet before the TV signal was cut as the show's hosts were being forced to read a political statement that said: "Gideon Mukungubila has come to liberate Congo from the slavery imposed on us by Rwanda."

"Gideon Mukungubila has come to free you from the slavery of the Rwandan," shouted one of the assailants on television, according to Reuters.

Gideon is said to be the nickname given to religious leader Paul Joseph Mukungubila by his followers. Mukungubila is a 66 year-old pastor who ran a failed bid in the 2006 presidential election.