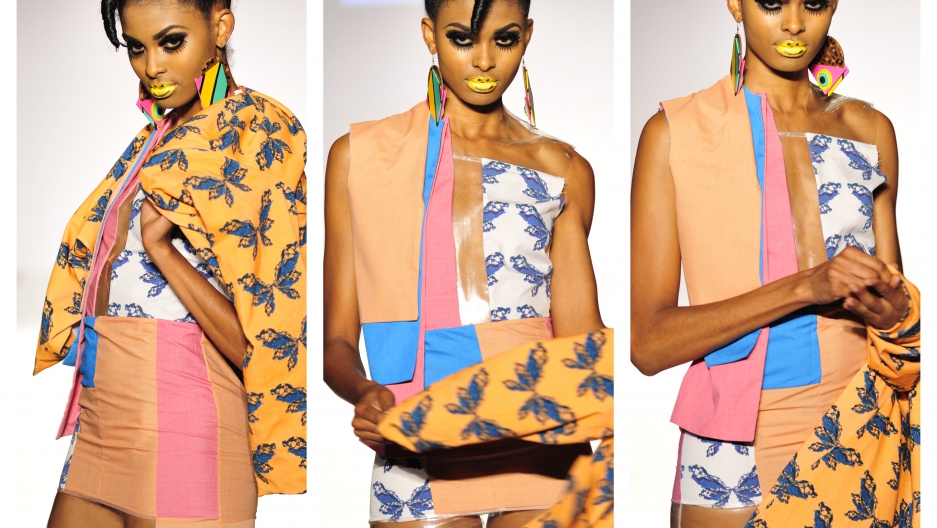 Adiree created the term African Fashion Week in fashion capitals that Disu says is "bridging both worlds and you’re allowing these business transactions to happen or be built on platform that everyone knows and loves which is fashion." At African Fashion Week NY is designer Sydney Davies from Sierra Leone.
Credit: SEAN JACKMAN
Share

London, New York City, Paris — these are all cities with recognized fashion cultures. While artists have drawn inspiration from Africa throughout history, 1967 marked the year of Yves Saint Laurent's landmark "African-inspired" collection. Since then, other top brands like Louis Vuitton have followed, including "African styles" in their collections.

Interviews with designers from four regions in Africa show that fashion there goes way beyond the styles seen on foreign runways. In fact, it’s often an error to think of African fashion as a single genre. Varying styles, trends and industries across the 50-nation continent reflect diverse cultures, styles and economies.

For local designers — especially those who have made it big overseas — fashion is an avenue for defining “African” in their own terms and creating economic impact in their communities.

"We can’t talk about Africa as a global place"

Marianne Fassler, a native of Johannesburg, is one of South Africa’s leading designers.

For 20 years her women's fashion line, Leopard Frock, has drawn inspiration from the eclectic streets of South Africa's largest city. Fassler stresses that her work is a reflection of the country's unique culture: a mixture of modern Western fashion and a variety of vibrant South African patterns.

“We can’t talk about Africa as a global place,” Fassler said during a Skype interview. “[South Africans] don’t walk around like the women of Somalia do or the women in Senegal do. They wear Western clothing.”

While South Africans have long integrated styles from abroad, Fassler says the internet has helped fashion from Africa to become trendy outside of the continent.

“We’ve got some amazing artists all over Africa,” Fassler said. “It’s being projected through social media onto a global interface where people are suddenly saying 'That is so cool.' Because it’s different from Canada. It’s different from Sweden.”

Social media, in particular, has been instrumental in promoting fashion from Africa, Fassler says. It allows young Africans to create their own images of life in Africa that stand in great contrast to the focus in much of Western media to on Africa as a place of poverty, conflict and corruption.

Like Fassler, Ghitta Laskrouif, a rising young designer from Casablanca, Morocco, says that her designs are distinct expressions of where she comes from.

“Fashion is a way to say who we are,” Laskrouif wrote in an email.

“My work is about handmade and ethical designs. It's ethical because I practice upcycling and counter fast and cheap fashion with handmade, quality products. [By] handmade, I mean crochet knitting, embroideries and mini products,” Laskrouif said.

Laskrouif is part of a generation of contemporary Moroccan designers who are changing perceptions of the North African country through fashion.

Fashion as an African industry

Africa is now home to four of the fastest growing economies in the world. But Afrobarometer surveys in 34 African countries show that growth hasn't reached most people. One in five respondents said that they often struggle to find everyday means like food, clean water and medicine. One possible solution to help lessen the inequality? Harness the economic power of the fashion industry, local designers say.

"We employed literally hundreds of thousands of workers in the industry. We supplied the whole world with high end, manufactured garments," Leopard Frock's Fassler says of South Africa's manufacturing heyday.

In South Africa, Western retail giants like Zara and Levi’s cater to a growing middle class and elites. But Fassler says a greater focus on local textile manufacturing could employ many ordinary South Africans.

Once a dynamic industry in South Africa, economic sanctions from countries like the United States slowed down garment manufacturing during the aparthied era. The jobs eventually moved to Asia, leaving South Africa's industry weakened. Fassler thinks the government should foster re-development of the sector, to include encouraging young South African designers to promote South African fashion.

“They [the government] don’t understand what it means. It’s not just about the shows; it’s about getting the orders after the show, the business of fashion,” Fassler said.

Ally Rehmutullah, from Dar es Salaam, thinks a focus on fashion can strengthen Tanzania’s cotton industry. A fourth-generation Tanzanian of Indian descent, Rehmutullah is a celebrated designer: his collections, filled with rich colors and elegant dresses, have been featured on runways from Mozambique to London.

A look from Tanzanian designer Ally Rehmutullah's S/S 2012 collection. '"Before it was other countries representing us, today its us speaking for ourselves," the designer says of fashion in Africa today. (Courtesy photo)

The cotton industry in Tanzania currently employs workers from about 500,000 rural homes. But what they produce is quickly shipped elsewhere to be made into fabric and clothes. Rehmutullah sees a missed opportunity.

“We produce raw cotton but don’t manufacture it,” he said.

Rehmutullah is looking to bring machinery to Tanzania that would allow mass production of clothing. He thinks "Made in Tanzania" lables could impact the local economy far beyond the fashion industry.

“If we had the facilities we would be able to produce our work, I feel I’m ready to keep my clothes made in Tanzania, not made in China,” said Rehmutullah.

Adiat Disu, from Nigeria, is the founder of communications and brand strategy company Adiree. She agrees that the fashion industry has substantial economic potential all over Africa.

“These designers, when they succeed, they’re naturally impacting their local community,” said Disu, whose company established African Fashion Week in cities like Tokyo to Milan. “They are teaching women how to be self-reliant and helping to develop their business skills by hiring them, helping them to create clothes, to create jewelry.”

Josefa Dasilva, a designer from Cape Verde, works with Adiree to promote her designs to an international audience. She stresses the importance of making a local impact.

“When I am not designing, I produce shows where my team and I raised over $4,000 to help HardtHaven Kids in Ghana, an orphan[ed] kids organization that helps with AIDS,” she said.

Designers based in Africa are using fashion to convey the wealth of diverse ideas, cultures and styles across the continent.

Adiree's Disu says those designers are showing the fashion world that there's no one way for their aesthetics to be defined.

“It’s such a mixture, in part, of different things. The fashion derives from that. That’s what makes it special: you're not going to get just one look.”