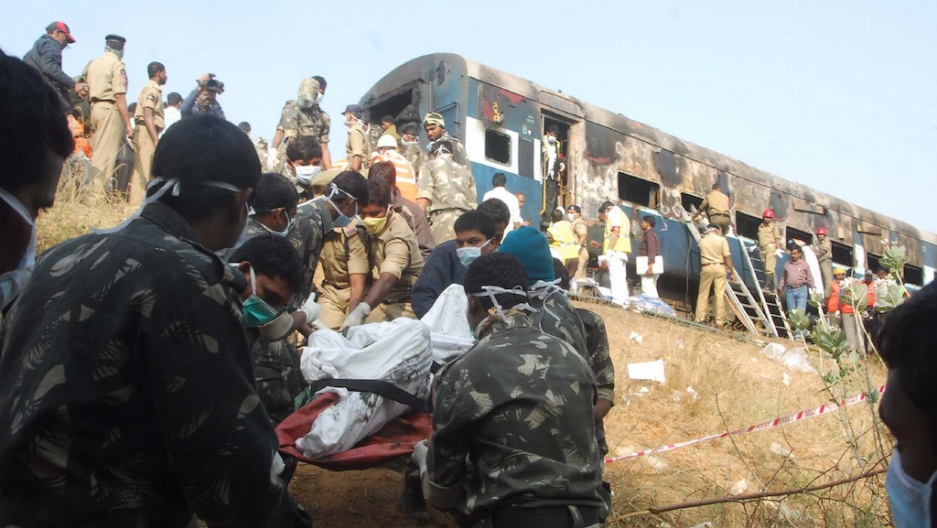 Indian rescue personnel use a stretcher to carry a body near a charred carriage of the Nanded-Bangalore Express near Puttapartihi in Ananthpur District some 300kms south of Hyderabad on December 28, 2013, after a fire engulfed the train.
Credit: STRDEL
Share

Some 60 passengers were onboard the Nanded-Bangalore Express when fire broke out in the B1 compartment as the train traveled through the Anantapur district of Andhra Pradesh state.

Police said many were killed by the thick black smoke that filled the train.

Others saved themselves by breaking windows and jumping from the burning compartment. More than a dozen were brought to hospitals with injuries from the jump.

The train was brought to a halt when the fire was discovered, and the engulfed compartment delinked from the rest of the cars to prevent the flames from spreading, according to C.S. Gupta, a spokesman for the railways.

More from GlobalPost: India train fire: As many as 47 dead

The fire did reach a second coach, but was put out before it caused much damage.

Firefighters had to force open the compartment doors to get inside the smoke-filled coach to reach the dead, and many bodies were found near the jammed doors.

Medical teams are carrying out autopsies to identify the bodies, as many were not recognizable because of the fire.

Initial rescue efforts were hindered by winter fog, and the first people to reach the scene were from nearby villages.

The cause of the fire, which has now been put out, is not yet known.

The tragedy comes just over a year after another train accident in the same state killed 32 people and brought attention to the Indian rail network's poor safety record.