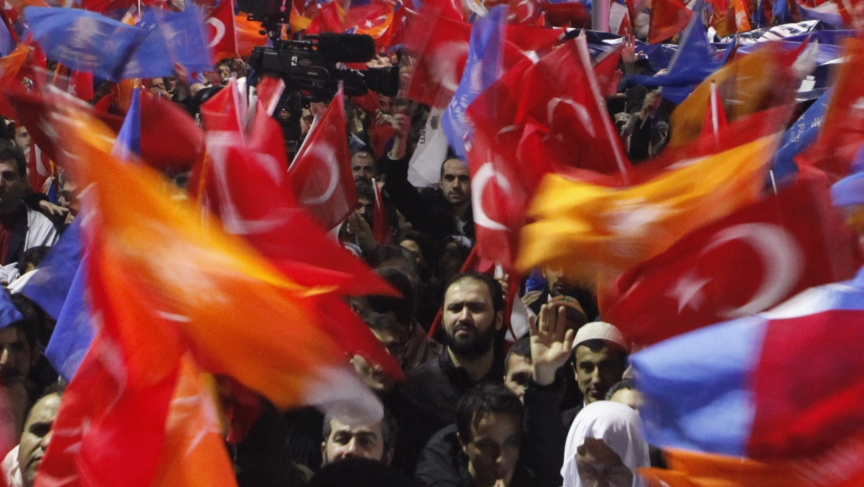 Supporters of Turkey's Prime Minister Tayyip Erdogan gather to welcome his arrival at Ataturk Airport in Istanbul December 27, 2013. There were also protests held in Turkey in opposition to Erdogan.

The Turkish government was shaken by a political scandal this week. Three ministers resigned after being accused of financial corruption and Prime Minister Recep Tayyip Erdogan was forced to reshuffle his cabinet.

On Friday, protesters were in the streets demanding that Erdogan resign. Police responding by shooting rubber bullets.

Jonathan Schanzer believes that a "gas for gold" deal with Iran lies at the center of the new scandal in Turkey. Schanzer is a former Treasury Department analyst who is now with the Foundation for Defense of Democracies in Washington, DC. He says the reason for the resignations is unclear, but at least one Iranian gold trader, Reza Zarrab, has been arrested along with the CEO of the state-run Halkbank. Both are tied to the sanctions-busting "gas for gold" scheme uncovered last year. That scheme allowed Iran to bring in $13 billion in gold over a year.

The global sanctions against Iran, Schanzer says, made it illegal for Iran to receive dollars or euros, so Iran was getting paid for its oil in Turkey's lira. But Iran didn't want lira.

"So what Turkey decided to do was to start allowing Iran to purchase gold with that lira, to have that sent to Dubai, to have it melted down into bricks and then brought into Iran," Schanzer says.

It was a way for Iran to get around the sanctions. Once the scheme was uncovered, Schanzer says, it took the US six months to close it, allowing Iran to bring in about $6 billion in gold.

The relationship between Iran and Turkey has deep roots, but the two countries don't necessarily see eye to eye. And, of course, Turkey is part of NATO and an ally of the US.

"The Turks have made it very clear that they are opposed to the Iranian nuclear program," Schanzer says. "They have also been at odds with the Iranians over the civil war in Syria, but at the same time we heard about this gas for gold scheme."

He says the Turks were relying on the US for many years to unseat Bashar al-Assad of Syria. "When the United States determined that it was not going to intervene militarily, the Turks I think saw that as a turning point and it looks like now they may be more willing to work with the Iranians, since the Iranians are likely to be a power in the region, if things continue to go the way they are now."