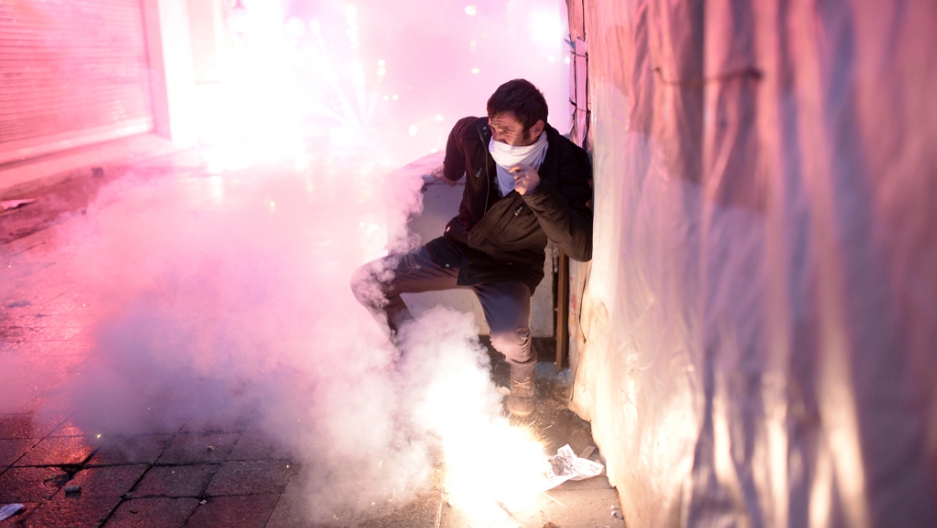 A Turkish protestor protects himself as fireworks explode on the Istiklal Avenue on December 27, 2013, during clashes between the Turkish police and protestors.
Credit: BULENT KILIC
Share

Istanbul's Taksim Square saw clashes break out between police and anti-government protesters on Friday, as the corruption scandal that has created political turmoil in Turkey spilled into its streets.

In scenes reminiscent of this summer, riot police doused anti-government demonstrators with water cannons, tear gas and rubber bullets, as some of the protesters retaliated with rocks and firecrackers.

Protesters yelled "Catch the thief!" calling on Prime Minister Recep Tayyip Erdogan to step down after a corruption probe ensnared some of his ministers and implicated his own son.

The investigation already triggered a major reshuffle of Erdogan's cabinet after three of his ministers quit on Wednesday.

Erdogan won't back down

A defiant Erdogan said, "The operations that started under the guise of corruption are an obstacle to building a new Turkey."

The backdrop to the crisis is a power struggle between Erdogan and former ally Fethullah Gulen, a US-based Turkish cleric who is hugely influential at home and whose followers hold key positions in the judiciary and the police.

On Thursday, the prosecutor overseeing the corruption investigation was removed from the case. Muammer Akkas accused the government of interfering with the judicial process and obstructing his work on the case.

A Turkish court on Friday blocked an attempt by Erdogan's government to change the rules on initiating corruption investigations.

Three lawmakers from the ruling Justice and Development Party (AKP) also resigned on Friday. One of the lawmakers, a former culture minister, said the party was being led by "arrogance," adding that he was leaving the AKP.

Turkey's army released a statement Friday, saying, "The Turkish Armed Forces do not want to get involved in political debates."

It added, "On the other hand, the TSK will keep on closely following the developments regarding its corporate identity and the legal positions of its members."

Its statement would seem to indicate Erdogan's success in separating the military and politics, as experts noted this kind of crisis would normally trigger an intervention.

Erdogan, who has led Turkey for 11 years, still "enjoys the fierce loyalty of pious voters and wealthy elites," Reuters noted. He might still weather the scandal that might have sunk "a less feisty leader."

In his speech to AKP supporters Friday, Erdogan said, "There are outside powers behind this."

"The target of the attack is Turkey whose economy is growing ... and whose weight in the world increases," he added.

Last week, he accused some ambassadors of "provocative actions" — interpreted as a warning to US Ambassador Francis Ricciardone.

"We find the continued baseless attacks by some elements of the Turkish media against our ambassador ... to be deeply disturbing," State Department spokesperson Jen Psaki told Agence France-Presse.