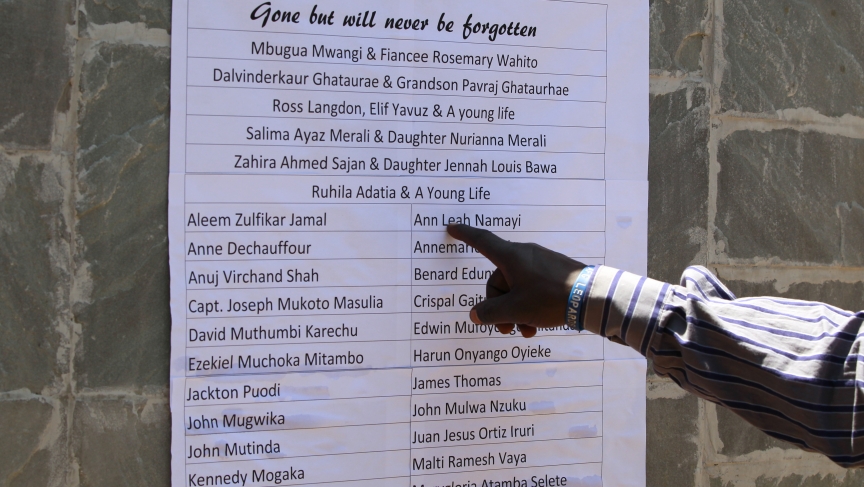 A relative points to the name Ann Leah Namayi on the memorial plaque for those killed during the Westgate shopping mall attack. The memorial is at Amani Garden in Karura forest.

It was one of the worst events of 2013. The world watched as hundreds of Kenyans fled Nairobi's Westgate Shopping Mall when armed gunmen stormed the building.

The four-day siege in September left 67 dead and more than 200 injured. The Islamist group al-Shabab, with links to al Qaeda, claimed responsibility for the siege.

Kenyan security forces ended the attack by firing explosives inside the mall. Al-Shabab had threatened more attacks not just against Kenya, but against all nations contributing troops to AMISOM, the African Union Peacekeeping force in Somalia.

Three months after the siege, the area around the mall is still cordoned off. "The long-term plan is to rebuild," said NDTV Kenyan journalist Laura Walubengo. "What [the government] is trying to do is to reassure investors that any losses they may have in the country will be protected by the government."

Since the attack, Kenyan authorities have charged four men with aiding the militants. The men have been charged with supporting terrorist elements in Kenya, harboring the gunmen in their homes, illicitly registering as a Kenyan citizen, and obtaining false identification documents.

But unanswered questions remain, especially about the response by Kenyan police and military to the crisis.

In the days following the initial attack, Kenyan soldiers were reported to have looted almost every shop in the mall, while it was under lockdown.

The level of security has gone up in various public places in Kenya. Many malls have added guards and metal detectors to their entrances.

"Not only the malls have had their security beefed up, even churches are having their security beefed up," said Walubengo. "So any car going in, they will even check in your engine to make sure that everything is safe and sound. In some places, they ask you to step out, so they can check out under the car seat and on the seat. It is a common sight across Nairobi."

The September attack heightened attention on the large Somali presence in Kenya. Hundreds of thousands of Somalis have come across the border into Kenya, fleeing war and famine at home.

"People are definitely more suspicious," said Walubengo. "And there have been incidents of fighting here and there, but nothing too dramatic, fortunately. People are trying to keep to themselves and really look at who their neighbors are. I do believe that a lot of policemen have been receiving tip-offs from the public as a result of this Westgate attack."