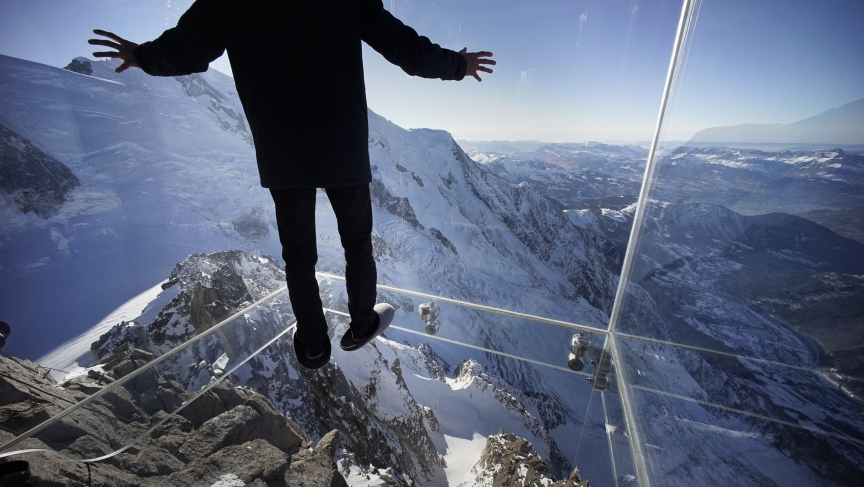 The "Step into the Void" installation allows visitors to stand at the Aiguille du Midi mountain peak above Chamonix in the French Alps. The glass enclosure is at 3,842 meters, with a 1,000 meter drop below.

If you’re afraid of heights, you’re probably best off avoiding the Chamonix Skywalk — a new installation in the French Alps where people can stand over a 3,396-foot sheer drop. On the other hand, if you have a problem with heights, you probably shouldn't be visiting the French Alps anyway.

The skywalk opened a week ago and The Atlantic has photos of the very high, but fully enclosed, glass box.

Forget forensic sleuthing, get out the fruit

Police in Mumbai, India, decided on a novel method of recovering stolen goods from a thief this week, according to the Times of India.

The accused was suspected of stealing a gold chain from a train passenger, and was thought to have swallowed it after he was arrested. Ninety-six bananas later, the truth — and much else — emerged.

The US solar industry is thrilled with its holiday gift

American solar panel makers once dominated the world, only to be trounced by Chinese manufacturers. But a newly-issued US Department of Defense rule should help the struggling US producers.

The new rule clarifies an old law — from 1933 — that requires the US government to "buy American." With today's multinationals and global sourcing, though, it has been really tough to decide what "buy American" actually means. PRI's The World reports that the Defense Department now lists those countries where US-affiliated manufacturers can work. And China is not on the list.

It’s not easy making it big as an up-and-coming rock band. Double that challenge if you are a Christian Pakistani rock band, living in the overwhelmingly Muslim port city of Karachi — notorious for sectarian violence against religious minorities. PRI's The World looked into the unique music scene flourishing in the city’s Christian enclave.

Der Spiegel has the story of how British paratroopers developed a secret weapon in the run-up to D-Day. It was the Paradogs.

Ordinary household pets were enlisted and trained to be parachuted into occupied France to assist in the fight against Hitler. They were trained to locate mines, keep watch and warn about approaching enemies. On D-day itself, the 13th Parachute Battalion flew with one paradog for every 20 human soldiers. Parachuting dogs are still around. A photo in the Der Spiegel article shows a US Army soldier parachuting with a work dog — in 2009.

One game seems all brain and the other all brawn. Yet chess and boxing are both brutal, unforgiving and based on tactical violence. And now, they have been combined.

Welcome to Chess-boxing. It's a round of chess, followed by a round of boxing — and you can win with a checkmate or a knockout. The BBC has photos and talked with former world heavyweight champion Lennox Lewis, who is not the only boxer fascinated with chess, about the similarities between the two, um, sports.

Perhaps you’re finding it a bit colder than you’d like right now? If so, pity the poor residents of Verhojansk in Russia — reportedly the coldest town in the world at the moment. Verhojansk registered a numbing -59 degrees Fahrenheit today, according to Wunderground.com. And there's no hope of improvement for the weekend.