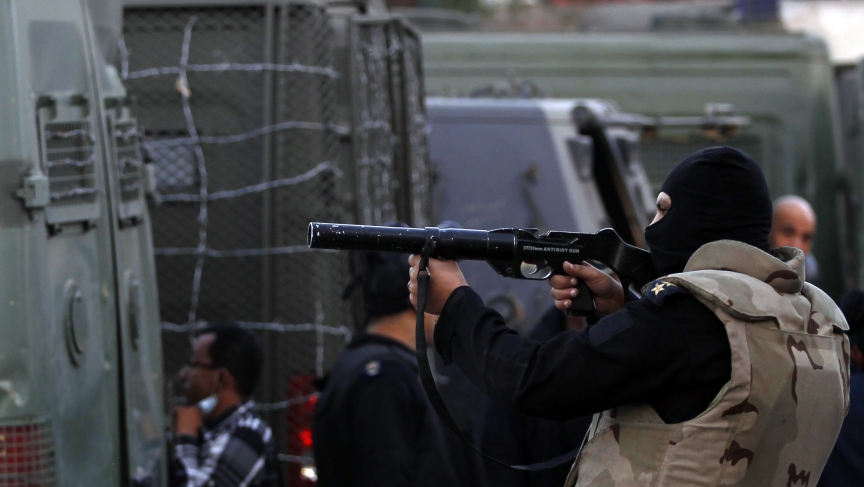 A riot police officer fires tear gas during clashes on Friday with students of Al-Azhar University who support the Muslim Brotherhood and deposed President Mohammed Morsi.

Egypt declared the Muslim Brotherhood a terrorist group this week. It was the latest move in a campaign by the military-backed government that some see as an attempt to eliminate the Islamist group as a force in Egyptian politics once and for all.

But the Brotherhood remains defiant. Clashes broke out on Friday between the group's supporters and Egyptian security forces in several cities. At least three people were killed and 265 arrested, according to police.

The terrorist designation means that Brotherhood leaders in police custody will now face possible execution. Those arrested for taking part in Brotherhood protests could be sentenced to five years in prison.

Two bombings in Egypt have set people on edge in recent days. On Tuesday, an apparent suicide car bombing killed 16 people and injured dozens at a police station in the Nile Delta region. And on Thursday, a bomb blast injured five civilians near a city bus in Cairo.

The government crackdown is aimed not only at the Brotherhood itself, but at other groups affiliated with the Islamist movement as well, including charities and hospitals.

"What we're seeing is a really concerted effort, not just to attack the Muslim Brotherhood's leadership, not just to suppress protests," says Matt Bradley of the Wall Street Journal, "but to dismantle the organization and, some would say, the benefits it provides to society."

Bradley spoke with PRI's The World from Cairo.

"We have to remember that Hosni Mubarak was ousted in 2011," he said. "And the Muslim Brotherhood has batted a 1,000 in every election since then."

Now, the Egyptian government and its supporters are stuck with the challenge of trying to square the circle. They want to provide democratic legitimacy for the July 2013 ouster of Egypt's democratically elected president — and former Brotherhood leader — Mohammed Morsi.

Bradley said this is a particular challenge for the thousands of secular revolutionaries who joined the 2011 revolution against Mubarak and now support moves by the police and army against the Muslim Brotherhood. For them, he said, it requires some "ideological acrobatics."