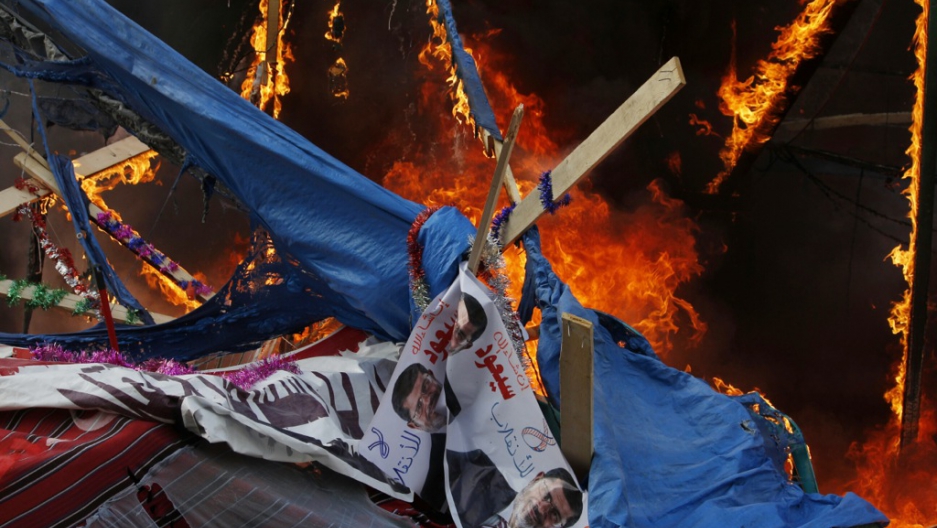 A fire rages in a protest tent after Egyptian security forces moved in to forcefully disperse supporters of ousted President Mohamed Morsi in a huge camp near Rabaa al-Adawiya mosque in eastern Cairo, Aug. 14, 2013. The operation began shortly after dawn when security forces surrounded the sprawling Rabaa al-Adawiya camp and a similar one at Al-Nahda square, in the center of the city, and launched a long-threatened crackdown that left dozens dead.
Credit: MOHAMMED ABDEL MONEIM
Share

A crackdown against the Muslim Brotherhood intensified after the Islamist group was declared a terrorist organization by Egypt's military-backed interim government earlier this week.

By Saturday morning at least six people were killed in clashes between Islamist protesters and opponents, while 265 were arrested as police cracked down on Brotherhood demonstrations.

"Brotherhood actions caused the deaths of three citizens when they clashed with residents," the interior ministry said in a statement on the nationwide clashes. Two security officials in the cities of Minya and Aswan reported that two additional people, pro-Morsi supporters, had also been killed in the clashes.

Pro-Morsi protesters threw Molotov cocktails, stones and fireworks at riot police at demonstrations across the country.

A student was killed when Muslim Brotherhood supporters clashed with Egyptian police at Cairo's Al-Azhar University, where two buildings caught fire, according to state media.

Friday's were the second round of arrests under the new law, as Brotherhood supporters were also detained on Wednesday. The crackdown includes seizures of stocks, land and cars owned by the popular Islamist group.

Egypt's government has also frozen the assets of 132 Muslim Brotherhood members, Ezzat Khamis, assistant to the minister of justice, announced to reporters on Thursday.

More from GlobalPost: Egypt's 'war on terror' escalates with outlawing of Muslim Brotherhood

The government's designation followed allegations that the Brotherhood was responsible for a suicide attack on Tuesday that killed 16 people — an attack the Brotherhood condemned, and that the Sinai-based militant group, Ansar Bait al-Maqdis, claimed responsibility for via an online statement.

After a meeting Wednesday night, Egyptian Deputy Prime Minister Hossam Eissa relayed the cabinet's decision on the Brotherhood: “The cabinet has declared the Muslim Brotherhood and its organization as a terrorist organization."

Egypt's continued crackdown on dissent is not isolated to the Brotherhood. Pro-democracy activists have been arrested and sentenced to three years in prison for their part in breaking a new anti-protest law, and for allegedly assaulting police officers in November.