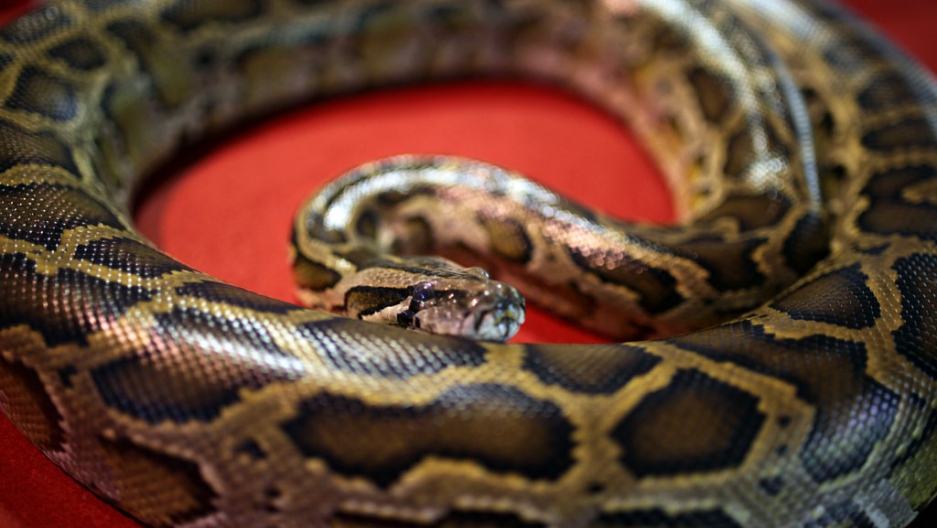 A python sits on display to celebrate Chinese New Year at the National Zoo in Kuala Lumpur on February 10, 2013.
Credit: AFP
Share

A security guard at the leafy Bali Hyatt was strangled to death by a large python early on Thursday, after he attempted to capture the reptile while the luxury hotel underwent renovations.

According to AFP, security guard Ambar Arianto Mulyo, 59, had grabbed the snake by the tail and by the head — but the roughly 15-foot long Burmese python was able to wrap around his neck and strangle him to death. His friends were unable to help him.

"The victim died on the spot as his neck was crushed and he could not breath," said Gusti Ngurah Yudistira, head of the police criminal investigations unit covering the Sanur area, to AFP.

"It happened so fast," said Bali Hyatt assistant security manager Agung Bawa to the Associated Press. "We were sad because we could not do anything to help him."

The snake remains at large on the tropical premises of the Hyatt, which is undergoing renovations. Tourists have been warned that the python remains in the area.

"The management team and hotel associates of Bali Hyatt express their sincere condolences to the family of the victim of the python attack," said Jamie Zimmerman Rothfeld, a spokeswoman for the Bali Hyatt, to CNN of the incident.

The Sanur area, where the Bali Hyatt is located, is a particularly popular beach destination for family vacationers, seeking a quiet stay far from the hard-partiers that populate Kuta Beach to the south of the island. The hotel is slated to re-open in 2015.

Burmese pythons can attain lengths of 23 feet and are common throughout Asia, with introduced pythons even taking up residence in the US state of Florida. Attacks on adult humans are rare — but not unheard of.