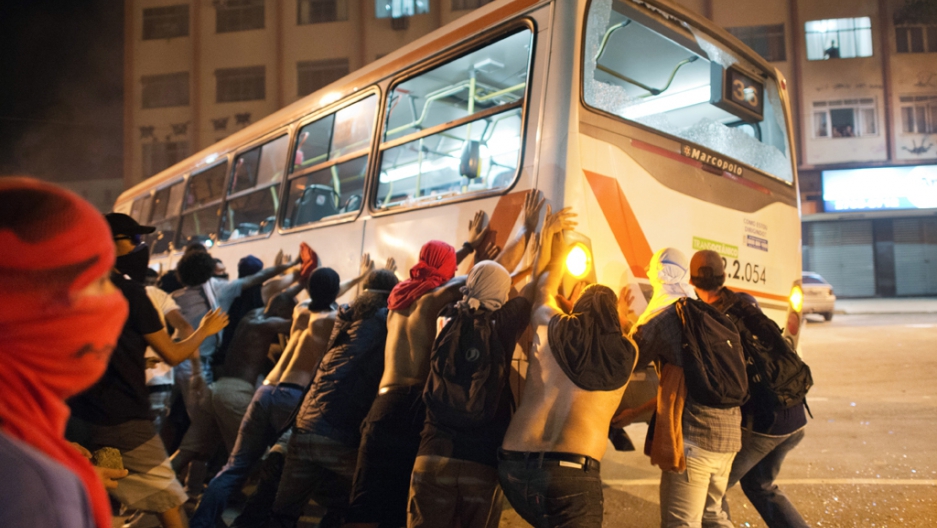 NEW YORK — The world’s largest corporations, many of them based in the United States, enter the new year with real trepidation.

Even politicians in Washington appear to be doing their job, albeit reluctantly, by sealing a deal on US government spending.

So why the long face, Joe CEO?

Put simply, the issue is uncertainty. As my colleagues at Control Risks explain in an annual look ahead at the coming year, RiskMap 2014, there’s plenty for large, multinational businesses to worry about as the new year begins.

For one thing, the hundreds of millions of new middle-class consumers created by the past decade of fast growth in the emerging world will no longer settle for promises of a better life tomorrow. They want it all and they want it now. And it is very uncertain their governments will be able to deliver.

Over the last 10 years, the global middle class grew to more than 2 billion people. That number is projected to expand to more than 3 billion by 2023, according to International Monetary Fund data.

In Brazil, Ukraine, Thailand, Turkey, Nigeria and elsewhere in recent years, mobs of this new consumer class have burst into the streets and, in some cases, shaken governments to the core.

Global governance has entered a phase of deeper dysfunction.

The US, at least for now, has pulled back from its post-Cold War role as a global policeman, and the 2008-09 financial crisis severely weakened its influence on global finance. So Washington has chosen to mitigate rather than mediate most disputes.

This has created a vacuum. The relative decline and divergent opinions of the developed countries have complicated the mediation of crises from Syria to Mali to the South China Sea.

The risk of uncontrolled, unexpected problems spiraling out of control has risen as result.

Take the question of “tapering,” the US Federal Reserve’s widely anticipated pullback on its bond buying that’s done so much to inflate the stock market and growth rates for emerging market nations.

The Fed announced on Dec. 18 it would begin pumping less money into the global economic system starting in January. It will taper its $85-billion-a-month bond buying program to $75 billion in the first month and reduce it by $10 billion each successive month as long as the US economy continues to improve.

This has made investors in emerging markets (EM) extremely nervous. There’s a high possibility that EM currencies will begin to slide against the dollar as US Treasury bond interest rates rise and they become a far more inviting investment than the debt of a riskier place like Turkey or Indonesia.

If this happens, which global institution will be capable of coordinating a global financial response to the problem?

The Group of Seven industrialized nations (the US, Canada, the UK, France, Italy, Germany and Japan) would have been the answer a decade ago. But since then emerging countries’ economies have grown rapidly and the old grouping no longer represents a dominant slice of global growth.

What about the Group of 20? It’s a nice idea, but reaching agreement would be a challenge. Tapering will affect some G-20 members very negatively (Indonesia, Brazil, Turkey and India, for instance) as their currencies will fall, while the US, Europe and Japan will see the interest rates rise for their 10-year government bonds.

More likely, the response will be uncoordinated — a vacuum, which is something global markets abhor. That means more scope for market gyrations and disruption for economies and the people in them.

Beyond the global uncertainties, a myriad of regional problems remains, too.

The euro zone is more on the lam than on the mend. Austerity policies championed by Germany have steepened the road ahead for Portugal, Greece, Italy and Spain. Only Ireland looks likely to emerge from the deep recession that’s struck this group since 2010. But Ireland is a case in point: It may not be bankrupt, but its per capita GDP is now 37 percent off the highs of 2007. That is a lot of pain with little gain to show for it so far.

In East Asia, the business activities of foreign companies in China will come under continued scrutiny. Meanwhile, India may continue to disappoint investors despite its potential to offer significant opportunities. Forthcoming elections are unlikely to produce a government strong enough to tackle the issues preventing growth rates from surging higher.

For the Middle East, the already entrenched and growing presence of Al Qaida affiliates fighting in Syria will continue to destabilize surrounding nations. Equally uncertain political and security environments in Egypt, Libya and Tunisia will provide fertile ground for the further development of nascent jihadist groups who could threaten commercial assets.

Africa will be home to more than half of the 20 fastest-growing global economies by 2017. That said, the continent also has some of the world’s least competitive countries, which struggle to generate the employment their expanding populations need. Security concerns will amplify these challenges. In Kenya, following the Westgate shopping center attack, the threat posed by the Somali militant Islamist group Al Shabaab will remain a primary concern. Al Shabaab is also likely to extend to Eastern African nations including Uganda and countries like Burundi and Ethiopia which contribute to the African Union Mission in Somalia.

In Latin America, the US Fed’s slower bond purchasing will expose the divide between countries such as Chile, whose more solid economic fundamentals will better insulate them from market volatility, and Brazil, whose heftier financing needs will likely be hit by a weaker currency and rising interest rates.

So by all means have a happy new year. But be prepared for the hangover to linger in 2014.