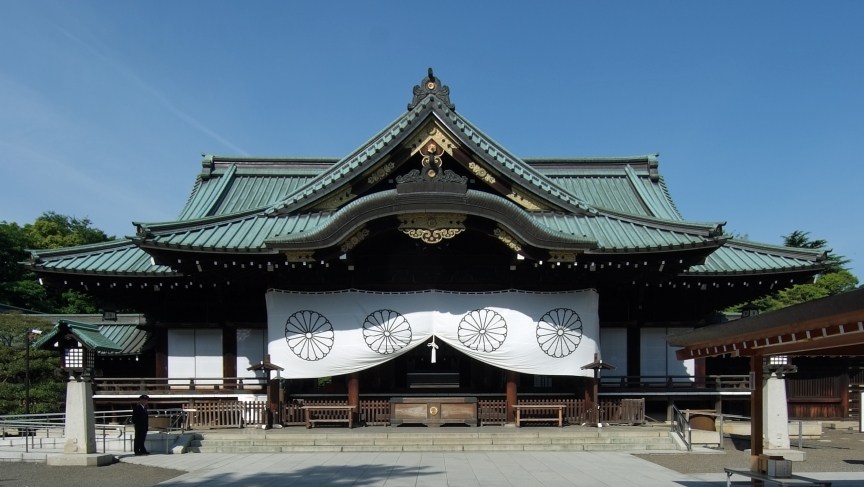 The Yasukuni Shrine is enormously controversial in the Asia-Pacific region. Any time it's visited by a Japanese leader, it provokes howls of protest across the region.  Thursday's visit by Prime Minister Shinzo Abe was no exception. But why does paying respect to war dead create such a hostile reaction?

The Shrine is a national religious institution in Japan. Since 1869 it has honored the souls of those who have died in the service of Japan. So it mostly contains military men, but also some classes of civilians who've died in war-time. These include merchant seamen, and workers in bombed munitions factories, but not people in the general population killed, say, by allied bombing in World War II.

In Shinto religion, the souls become 'kami,' or revered spirits. The word can be translated as 'gods,' but perhaps the word 'saints' is the most appropriate word in the western religious lexicon. So it's a holy place for millions of Japanese who lost relatives fighting for their country.

Among the 2.4 million souls enshrined and revered in the Yasukuni Shrine are about 1,000 war criminals from World War II.  These were men who were convicted and executed by Allied war tribunals, or who died in jail.  This is one of the main problems for Japan's neighbors; that reverence is being paid to those who committed some of history's most egregious crimes. The shrine wasn't an issue before they were inducted en masse in a secret ceremony in 1978, after a special new category of eligibility was created for the 'victims' of the international war crimes tribunals.

Those crimes were horrendous. The charge sheet at the tribunal included "murdering, maiming and ill-treating prisoners of war (and) civilian internees ... forcing them to labor under inhumane conditions ... plundering public and private property, wantonly destroying cities, towns and villages beyond any justification of military necessity; (perpetrating) mass murder, rape, pillage, brigandage, torture, and other barbaric cruelties upon the helpless civilian population of the over-run countries."

That list hardly captures some of the individual horrors. For example, during the "Rape of Nanking" in 1937, two Japanese officers had a contest to see who could kill the most Chinese with their swords. Japanese newspapers covered it as though it was a sporting event, talking about the contest going into an "extra innings" when they both reached 100 at about the same time.  Elsewhere, prisoners of war were used for bayonet practice, to toughen up new recruits in the Imperial Japanese Army; while other PoWs and Chinese civilians were staked out at scientific intervals to test the effectiveness of chemical and biological weapons. Chinese cities were deliberately infected with biological agents.  Countless young Asian women were forced into sex-slavery to 'entertain' the troops.

The US-led tribunals had three classes of war criminals.  Class A was reserved for those who committed a "crime against peace," by participating in "a joint conspiracy to start and wage war." Under international law, it's a crime to initiate an unprovoked war.  Tens of millions died in Japan's wars to expand the empire from 1937 to 1945.  Class B war criminals were those actually carried out specific atrocities, while Class C was for those accused of "the planning, ordering, authorization, or failure to prevent such transgressions at higher levels in the command structure." In other words, those with command responsibility.

The tribunal's work has been criticized for being inconsistent. It was found politically expedient to exempt all members of the Royal family, despite some Princes having direct command responsibility for atrocities. Likewise, those who conducted the chemical and biological experiments got a pass too: the Americans found their results so useful that they didn't want it presented in court. These included Shiro Ishii who commanded the infamous Unit 731.

In all, about 5,700 Japanese were charged in Classes B and C before the international war crimes tribunal in Tokyo. Almost 1,000 were executed. Others were tried and executed by the Communist Chinese and by the Soviet Union.  It's these men whose presence at Yasukuni offends Japan's neighbors, including 14 Class A criminals.

There are other grievances against Yasukuni as well.  It's not just a memorial, it also contains a museum visited by thousands of Japanese schoolchildren every year. And the version of history that it presents about World War II is sanitized to say the least.

Most agree its tone is nationalistic; some say xenophobic. It plays down the fact that Japan began the war with China and with the United States and the other western powers; and it does not give much attention at all to the atrocities committed in the name of Japan.  China and other countries complain that Japan consistently fails to fully acknowledge its atrocities, and fails to educate its young people about those crimes.

A lesser grievance is that all those who served are enshrined, including Koreans and Taiwanese who -- as subjects of the Japanese empire -- were conscripted to serve.  Tens of thousands of individuals from both nations are among those at Yasukuni. Many of their families have expressly asked for them to be removed, but the priests say that is impossible under Shinto.

That raises the question then of why Prime Minister Shinzo Abe went to pray at the Yasukuni Shrine on Thursday.

There are two reasons.  For him, this is partly a personal statement. His own grandfather, Nobusuke Kishi, was arrested by the Americans on suspicion of being a Class A war criminal. He had served in various high level posts in occupied Manchuria and later was in the war cabinet. He was later released without charge, and went on to become Prime Minister himself.  But the stain of association with Japan's war crimes remains with the family. Some experts say this shows he is himself something of a historical revisionist.

Secondly, it plays well with his political base. A section of Japanese society likes to see the tribunals as unfair; a kind of 'victor's justice.' They complain that no Americans were prosecuted for the use of the atomic bomb against Japan, or over the mass firebombing of Japanese cities. Abe is a right-wing politician, and the visit to Yasukuni fits with a pattern of his willingness to confront China over territorial disputes, and his attempt to lift the constitutional ban on Japan having a real military force. Currently Japan only has a "self defense force."   That raises concerns elsewhere in Asia about the re-militarization of Japan's foreign policy.

That's not to say his move is universally popular among Japanese.  There's been plenty of criticism at home.  Many Japanese, especially among the older generation, are very opposed to Japan becoming re-militarized or more assertive.  However, polls show most Japanese are apathetic or ignorant of the nature of the war, especially the young.