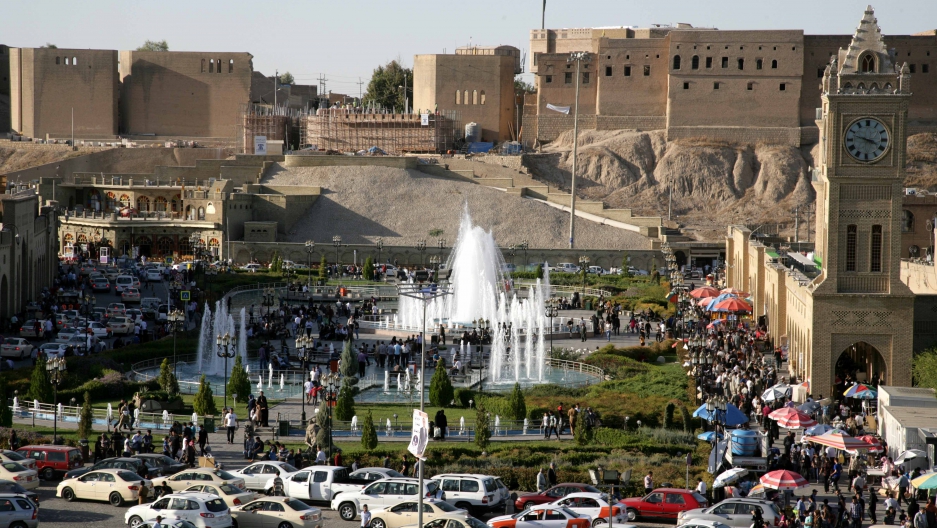 This Oct. 12, 2013 photo shows the citadel and City Park in the center Iraq's Erbil, the capital of semi-autonomous Iraqi Kurdistan, where things look a lot better than they do in federal Iraq.
Credit: Safin Hamed
Share

ERBIL, Iraq — Many of the men who hold positions of power in Iraqi Kurdistan spent their lives struggling for a Kurdish state, from fighting in the hills to languishing in jails to lobbying for support in distant Western capitals.

What they accomplished is impressive.

Today, Iraq’s semi-autonomous Kurdistan Regional Government (KRG) acts like it’s running a country of its own, with an organized military, diplomatic missions and a host of other institutions. Business is booming, with new hotels and shopping malls lining the wide boulevards of Erbil, Iraqi Kurdistan’s capital and the fourth largest city in Iraq.

In fact, things look a lot better in Iraqi Kurdistan than they do in federal Iraq. But as Iraq’s Kurds settle into their hard-won comfort, power and stability, they find themselves stuck in a balancing act.

Next door, where Syria’s civil war continues with no end in sight, Syrian Kurds have carved out their own slice of territory in the northeast, with pockets elsewhere. For the first time in modern history, two out of four areas stretching across Iraq, Turkey, Iran and Syria claimed by the Kurds as Greater Kurdistan are enjoying some level of autonomy.

But with the ascent of Syria’s Kurds, Iraq's KRG finds itself weighing the aspiration for a pan-Kurdish state against the risk of getting involved in Syria's vicious conflict.

At the same time, the KRG sees that direct involvement in Syria could backfire. Kurdish leaders in Iraq are understandably reluctant to gamble with the peace and prosperity they have struggled to win.

“We would provoke a lot of people, we would create a lot of problems and it would be counterproductive,” said Falah Mustafa Bakir, the head of the KRG’s Foreign Relations Department and de facto foreign minister.

“We support and sympathize with the rights of the Kurdish people in each part” of Greater Kurdistan, he added, “but it’s for each part to reach an agreement through a political and peaceful way with the governments they live with.”

KRG officials are acutely aware intervention in Syria on the Kurds' behalf could potentially harm relations they have established with Turkey and other regional powers.

Historically, Iraqi Kurds distrusted Turkey, given the country’s heavy-handed repression of Kurds within its own borders and its opposition to a Kurdish state.

Just a decade ago, as the United States prepared to invade Iraq, there was considerable concern among Iraqi Kurds that Turkey could intervene militarily to nix hopes of Kurdish autonomy.

“10 years ago, 20 years ago, the word Kurdistan — the K-word — was prohibited. We were northern Iraqis,” said Salih.

More from GlobalPost: Iraq: 49 steps to failure in one crazy chart

But in recent years the KRG has fostered a strong and increasingly warm relationship with Turkey built on mutual security and economic interests.

The KRG and Turkey recently agreed on an oil pipeline deal that could bring oil revenue directly to Iraq’s Kurds, potentially loosening Baghdad’s already-frayed tether on the north, with which federal Iraq is obligated to share oil revenues.

But while Turkey maintains friendly relations with the KRG, there are indications that the country would not take kindly to any other Kurdish regions emerging along its borders.

For now, the KRG says its support should be limited to encouraging Syrian Kurdish groups toward unity within their respective nations.

“We would welcome autonomy for the Kurds of Syria to have the control over their own area, but in coordination and in cooperation with the rest of the Syrians,” said Bakir, the head of the foreign relations department.

“The best thing we can do is offer them an example,” said Salih.  “We have proved in Iraqi Kurdistan that we could not move beyond our miserable past until we got united … [and] took advantage of a new environment after the Gulf War.”

But getting Kurds in Syria to agree with that may be difficult.

The KRG has found itself at odds with the Democratic Union Party, the dominant Kurdish faction in Syria with a monopoly on power in most Kurdish areas.

Commonly referred to by its Kurdish-language acronym PYD, the group has close ties to the Kurdistan Workers’ Party (PKK), which is considered a terrorist organization by the US, European Union, Turkey and others.

In 2012, fighting between the PKK and Turkey was the deadliest in more than a decade. Earlier this year, the PKK agreed to a ceasefire and said it would withdraw its guerrillas from southeastern Turkey and northern Iraq.

The militant strain of Kurdish nationalism embraced by the PKK and PYD, hostile to both Turkey and the mainstream Syrian opposition, clashes philosophically with the KRG — whose officials say they have forsaken militancy in favor of peaceful solutions to the Kurdish question.

But on the ground in Syria, PYD is popular among many Kurds, and its militia has proved to be a formidable fighting force.

In November, the PYD unilaterally announced the formation of an interim government in Kurdish areas of Syria, a move seen as a first step toward autonomy — which the KRG and Turkey quickly condemned.

“The PYD wants to control everything,” said one senior KRG official involved in Syria policy who spoke on the condition of anonymity. “The way they behave represents a dictatorship.”

The KRG backs a group of 16 Syrian-Kurdish political parties under the umbrella of the Kurdish National Council. But the groups are small and remain unable to form a cohesive unit.

“It is not easy for them to make decisions together,” said Mohammed Rasho, a senior PYD representative in Iraqi Kurdistan. “The revolution cannot wait for these conflicts. … You have to think quick.” The PYD considers "the revolution" to mean a Kurdish push for autonomy and security in Syria.

Rasho believes that Iraq's KRG did not do enough for Syria’s Kurds because of its relations with other countries.

“They are still not free. They have autonomy, but they are under the influence of Turkey and Iran … countries that are not the friends of the Kurds,” he said.

While the KRG claims it is only offering moral support and guidance to Syria’s Kurds, it has been quietly training a militia of Syrian Kurds that could possibly used to intervene in the country. Multiple KRG officials acknowledge its existence, though most are tight-lipped on details.

“[The militia] is supported by President Barzani,” said Ibrahim, a 30-year-old Syrian Kurdish member of the force living in Iraq’s largest refugee camp, Domiz. He withheld his surname because he is not authorized to speak to the media. "We are a regular military force, we are a national Kurdish army.”

Ibrahim, a lieutenant, said that while the enlisted men and lower officers in the force are Syrians, senior officers are exclusively Iraqi Kurds. Neither Ibrahim nor KRG officials would go into detail on the size or armaments of the force, beyond saying it numbers in the thousands and is well equipped.

The intended mission of the military force is unclear. In August, Iraqi Kurdistan’s President Masoud Barzani raised the possibility that the KRG could intervene militarily in Syria if extremist factions threatened Kurdish populations. While other KRG officials maintain that the force is simply preparing Syria’s Kurds for their future, skeptics say the group could be leveraged as a counterweight to the PYD.

“If we go on a mission inside our homeland, we will defend our homeland against anyone who attacks our region,” said Ibrahim, the Syrian lieutenant.