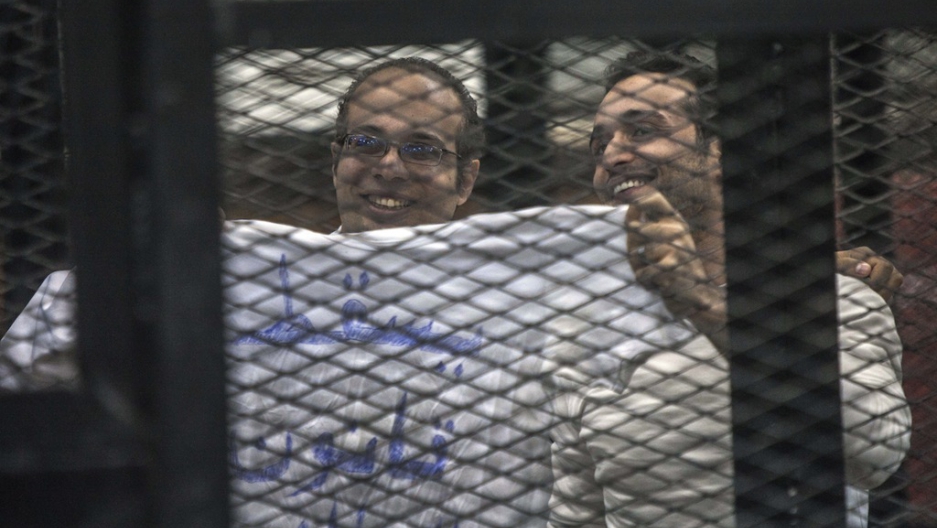 Political activist and coordinator of the April 6 Movement, Ahmed Maher and activist Ahmed Doma (R) show a T-shirt reading 'Dropping the law on demonstrations' during his trial on Dec. 8, 2013 in Cairo, Egypt.
Credit: Mahmoud Khaled
Share

Activist Ahmed Maher and two other popular icons of the Egyptian revolution began a hunger strike to protest their ill treatment at the hands of their jailers inside Tora Prison in Cairo on Wednesday.

The website of the April 6 Youth Movement, to which Adel and Maher belong, issued a statement on Thursday confirming reports of the hunger strike, saying that the activists had been subjected to "psychological war" and were not allowed proper winter clothing.

The news was also confirmed by fellow Egyptian rights activist Mona Seif, who issued a statement on Facebook:

“[They] started a hunger strike in protest at their conditions in prison. For example, their winter clothes have been taken from them because — after their sentencing — they are the wrong color, and they have been given no replacements,” Seif wrote, according to Ahram Online, an Egyptian news website.

More from GlobalPost: Egypt's 'war on terror' escalates with outlawing of Muslim Brotherhood

The three prominent activists were given three years in prison last week for allegedly violating a new draconian anti-protest law and assaulting police officers in November, when the three men participated in a demonstration outside the upper house of parliament.

The new law had passed that same month, and states a public assembly of more than 10 people must be approved by authorities.

While many Egyptian activists have faced persecution over the last three years, Heba Morayef, Egypt director with Human Rights Watch, said last week that the sentencing of Douma was something of a new development.