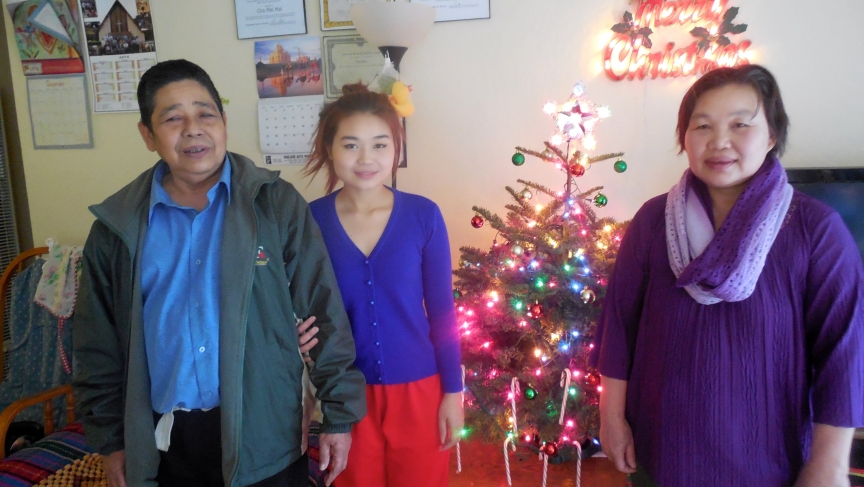 Cho Mei and her parents, refugees from Burma, bought their first Christmas tree this year. Mei says she's even participating in a "Secret Santa'"gift exchange with her family — something she learned from her Burmese church group in Oakland, California.

The US resettles over 50,000 refugees each year. Some celebrated Christmas before coming to the States, others didn't. But once they're here, Christmas becomes a time for family to come together because cities shut down and most people have the day off.

Many refugee families celebrate in their own way, with their own traditional foods — like 18-year-old Patience Wilson and her family. The family came to Oakland as Liberian refugees eight years ago. Wilson says she had a bit of culture shock when she saw how Christmas is celebrated in the US, with lots of decorations and even more lights.

“We were kind of surprised that they put a tree in their house for Christmas and they just put stuff on it,” Wilson says at her home in Oakland. “It was kind of cool, but it was kind of dirty because it was just all over the place, and every time, you have to sweep it and cut stuff off of it.”

In her Liberian refugee camp in the Ivory Coast, Wilson says Christmas was a time for the entire community to come together, not just family. It was one huge party and everybody was invited.

“You know how people go out for Halloween and get candy? For Christmas, we go out and knock on people’s doors and say, ‘Happy New Year’ or something like that and we get money.” At the end of the day, the whole neighborhood would gather to make music.

Wilson's grandfather, 74-year-old Robert, comes into the kitchen and sings one of those Liberian Christmas carols. He brought the family to Oakland when Wilson was 10 years old. She's now a senior in high school. Her grandparents left Liberia during one of the country's civil wars because Robert was from the Kranh ethnic group, and his wife was from the Grebo group — and the two factions were fighting. Wilson was raised in a Liberian community in an Ivory Coast refugee camp known as Peacetown. In the past decade, more than 600 Liberian refugees have resettled in California, and a few hundred now live in Oakland.

In Peacetown, they lived off food rations, but would trade with locals for luxuries like yams and plantains. Wilson says for the holidays, they'd go all out.

Wilson says she'll be making one of the plantain dishes for Christmas dinner here, and begins to prepare it in her kitchen to demonstrate.

“There’s some [dishes] where it’s mashed up and it’s really spicy. Those were my favorite, but I don’t know how to make it. So I just make these ones where you just fry them.”

Wilson chops up the plantains, cooks them in hot oil, waits until they brown, then serves them to her grandfather to see if they're up to par. Robert takes a bite and proclaims loudly that they’re perfect, which makes Wilson smile.

Lauren Markham says food is a refugee's connection to the homeland. She works with refugees around the globe through a San Francisco-based group called Refugee Transitions. Markham says she is always offered food when she visits refugees in their homes, and she never refuses a bite — because food is a way to strengthen self-esteem, especially among newly-arrived refugee women. “Being in a place where you’re always the recipient of services, to be able to offer something to someone, and being able to offer a gift from your own heart, that you made, is a really powerful thing.”

Markham says families learn very quickly where to buy their cultural food. She says refugees are happy that the Oakland area has many ethnic food markets. “The families from Thailand can buy these certain ingredients from the Chinese markets in Chinatown. And the families from Iraq can go to the halal market on Telegraph.”

Markham often asks refugees for recipes, and she says they're always thrilled to share — it's a chance for them to reverse roles and be the teacher in a foreign land. That's what inspired Markham to make a refugee cookbook, called "Between Meals." It will be released in February, with most of the proceeds going to the refugee women in the Bay Area who contributed recipes.

Markham says refugees struggle to find the balance between retaining their own cultures and assimilating to those in the US. Take Christmas, for example.

“I’ve definitely been in families' homes who have little Christmas decorations and ornaments that they found, because I guess that ‘tis the season, and that’s what we do here,” Markham says, “just as it happens in the fashion that we wear, or learning English, or eating McDonalds — participating in other aspects of this culture.”

Twenty-one-year-old Cho Mei and her family have fully embraced Christmas. They're Karen refugees, an ethnic minority in Myanmar, a country also known as Burma. She says her family was Buddhist, but they would celebrate each year with their Christian neighbors in her refugee camp in Thailand.

Cho Mei says her family fled Burma because many Karen people are tortured, raped and forced into labor by the Burmese government. They relocated to a refugee camp in Thailand that borders Burma. But once they got there, Cho Mei says they were practically treated like prisoners.

After nine years in the refugee camp, Cho Mei's family relocated to a Burmese neighborhood in Oakland — 200 Burmese refugees have moved to the county in the past five years alone. Over 3,700 Burmese refugees have relocated to California in the past decade. A large number of Karen in Oakland are Christian. So Cho Mei's family soon adopted that religion as their own.

Cho Mei's mother, Naw Htoo, goes into the kitchen and boils water to prepare one of her holiday dishes — a traditional Karen soup with lemongrass, lime and chicken called 'Da Klah Chi'. Cho Mei's family still cooks Karen food on Christmas. Even though they've converted to Christianity, they still hold onto their Burmese heritage through food. Cho Mei says she goes Christmas caroling with her Karen church members in Oakland, but they sing in their own language.

Cho Mei’s family bought their first Christmas tree this year and put a neon "Merry Christmas" sign on their wall. Patience Wilson, the Liberian refugee, is also buying her first Christmas tree with money she's saved from her after-school job. Both girls and their families will get December 25th off — and that's reason enough to celebrate.

Here's the chicken and lemongrass soup receipe made by Cho Mei’s mother, Naw Htoo, which will appear in the "Between Meals" cookbook. Other recipes come from Afghanistan, Eritrea, Liberia, Somalia, and various Burmese ethnic groups.

●      4 chicken breasts, cut into very small pieces and stir-fried in

●      1 14-oz package of yellow Chinese noodles. (One brand is Sunlee. These are spaghetti-like wheat noodles with turmeric added for color.)

●      Half a bunch of fresh coriander leaves, washed and cut into small pieces with scissors

●      About half a 7-oz package of shahe dried rice noodles (found in an Asian store; they’re about half-an-inch wide; use as much as you think guests will eat as a crispy topping for the noodle dish).

●      Stir-fry the small chicken pieces in oil with salt and turmeric.

●      Stir-fry the chopped onion in oil with paprika.

●      Bring it to a boil over high heat. Lower to medium heat and cook about 30 minutes, until the mung beans are soft and losing their shape.

●      In a different large pot, boil the yellow Chinese noodles in enough water to cover them; cook until they are soft/al dente. Drain.

●      Meanwhile, in a wok or deep pan, heat 2-½ cups of oil on high heat. By the handful, drop in a batch of the dried rice noodles. (Be careful of splatters.) Stir constantly until crisp and beginning to brown. Remove with a slotted spoon and repeat until all have been fried. Put in a large bowl for the table.

●      Prepare the toppings as described above while you wait for the noodles and sauce to finish. Put each topping in a separate dish for the table.

●      Put noodles and sauce in separate large bowls on the table. Each person serves him/herself noodles and ladles sauce over them, then adds toppings as desired, including coriander, squeezed lime juice and crispy rice noodles.