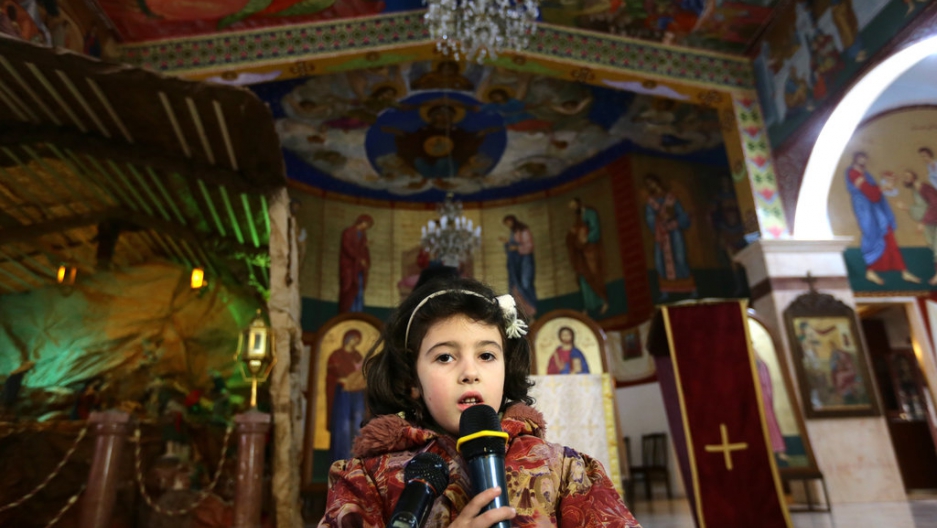 A Syrian girl from the Christian town of Maalula, a symbol of the ancient Christian presence in Syria which is currently under control of Syrian rebels, including jihadist groups, speaks during a service at the St. Joseph church in Damascus, on December 18, 2013. Syrian Melkite Greek Catholic Patriarch Gregory III Laham, has called on his fellow Christians to stay in Syria, despite the brutal conflict raging in the country. According to the patriarch, 450,000 Syrian Christians have been displaced by the conflict that began in March 2011, around 40,000 of whom have fled to Lebanon.
Credit: Louai Beshara
Share

DAMASCUS — The Arab Spring has turned very wintry for many Christians in the Middle East.

Christians and Muslims co-existed for centuries in the region, but in several countries including Egypt, Tunisia and Libya, ultra-conservative Islamic groups have launched violent attacks on minority groups in order to rally their supporters against infidels and propel themselves to power.

Extremist rebels regularly shell Christian neighborhoods in Damascus and kidnap Christians for ransom in areas under their control. GlobalPost has learned that Christians are also being kidnapped in Damascus by militias supporting Bashar al-Assad.

Some 10 percent of Syria's 22.5 million people are Christian, both Orthodox and Catholic. Each Christian faith has its own story.

More from GlobalPost: The Road to Emmaus: Dwindling Christian communities of the Middle East

Armenian Christians fled to Syria after the Ottoman Turkish genocide of 1915. For them, the current civil war is a double tragedy. About one-third of the pre-war Armenian population of 120,000 has left the country as refugees, according to Bishop Armash Nalbandian of the Armenian Orthodox Church.

Armenians had created a new life in Syria after 1915, establishing schools, businesses and churches. "After 95 years we are suffering" again, said the bishop. "It’s more difficult for us to carry this cross."

Christians also face attack because of their politics, according to Father Simon Faddul, director of the Catholic charity Caritas in Lebanon.

He explained that some of the Christian refugees in Lebanon are Syrian government employees. Others may be related to Syrian soldiers or members of the intelligence services. So they face persecution because of their pro-government views.

"They live in continuous fear," said Father Faddul. "Christians have paid in blood."

And sometimes they pay in cash.

Recently, a 20-year-old Christian student was kidnapped in broad daylight in front of his university in Damascus.

His father got a call demanding a huge ransom in US dollars, said the student's uncle, Hagop, a university professor and regime supporter who asked that only his first name be used. "They think the Christians are all rich."

In recent months, dozens of Christians have been kidnapped for ransom in Damascus, according to Hagop and other Christian leaders. Christians are perceived to be more prosperous than the majority Sunni Muslims. They had felt relatively secure in the largely secular society established by the regime of Bashar al-Assad and by his father, Hafez al-Assad, who ruled for decades before him.

The 20-year-old boy's family was finally able to negotiate a deal and the student was released, according to Hagop. The family never discovered the identity of the kidnappers. Hagop said they could have been anti-government rebels or common criminals. Rebels regularly kidnap civilians in areas under their control, according to Human Rights Watch.

"But most frighteningly, we suspect some kidnappings are carried out by the Popular Committees," he said.

The committees are a pro-government militia, which were incorporated into the National Defense Force late last year. Militia members receive a salary, uniforms and arms from the government.

"How could a rebel group infiltrate secure areas of Damascus, kidnap someone in front of the university and then take him through all the checkpoints to an area they control?" asked Hagop. "No, it has to be someone on the inside."

Christians feel squeezed by the lawlessness from both sides. But most Christians fear extremist rebels more than the government.

"The guarantee of security of minorities is to have good functional government, a strong government," said Bishop Nalbandian. "This security we experienced and saw with the government of President Bashar al-Assad."

When the Syrian uprising began in 2011, many Christians sympathized with the calls for democracy but worried about the growth of Islamic extremists, many of whom saw Christians as infidels. Bishop Nalbandian said in the first few months, Christians hoped the government would make significant reforms through meaningful dialogue with the opposition.

"Unfortunately, the government lost this moment, or couldn't or didn't use this moment," he explained. "The government did some reforms according to the constitution, but actually it's not enough."

For example, the government lifted its formal state of emergency first enacted in 1963, but then continued repressive policies. The government held parliamentary elections in 2012, but the new body has little power.

Meanwhile, over the past year, extremist rebel groups seized more territory. When the rebel group known as the “Islamic State of Iraq and Syria” took over the northern city of Raqqa earlier this year, for example, it closed the churches and forced most of the Christians to flee.

The civil war has ripped apart relations among Christians and Sunni Muslims, even in Hagop's small hometown.

As the crow flies, Hagop's town lies only 12 miles from central Damascus, but he must drive through half a dozen military checkpoints to get there. What used to be a 30-minute commute now takes three hours.

No one makes the drive at night because rebels sometimes hit the road with mortar fire and rockets.

"I drive into Damascus only a few times a week and otherwise stay home," Hagop said. "We don’t mind the checkpoints. I say thanks to the soldiers because they are protecting us."

Hagop's town is a mix of Christians, Sunnis and Druze, a Muslim ethnic and religious minority. Before the crisis, residents got along well. Friendships and business relations extended among all religious groups.

Officially, the Assad government is fighting to maintain this secularism. Officials claim that most Sunnis support the government, and the army only fights extremists, or takfiris. That epithet means "impure Muslim" and is used to describe all rebels.

Hagop admitted, however, that the reality in his town has become far different. "The Army blocked off the Sunni part of my town," he said. "Now we hardly see the Sunnis at all. Everyone is suspicious. Is he a terrorist?"

Friendly relations with neighbors have broken down.

"I tell my children not to talk politics with anyone outside our immediate family. You never know who might be a kidnapper."

Soldiers are hostile to all Sunnis because they suspect them of supporting the rebels, Hagop said.

"Because I have an Armenian name," he said, "I don’t get hassled at the checkpoints. They are looking for Sunnis. One time a soldier asked if I was Kurdish because I was born in the north, in the Kurdish region. I said, 'no, I’m Armenian Christian.'"

Being "one of us" doesn't mean Christians are accepted as equals. Even pro-government Muslims see Christians as guests in a Muslim country.

“We protect Christians and Jews,” said Sheik Abdul Salaam Al Harash, a representative of the Muslim Scholarship Association. "That is our duty as good Muslims."

Hagop pointed out, however, that Syria was a Christian country for centuries before it became majority Muslim. St. Paul traveled extensively in what is modern-day Syria, and Christianity spread rapidly during the era of the Roman Empire.

"This was a Christian area before the Muslims came," said Hagop. "But they still see us as guests. We don’t need protection. We need full rights as citizens."

Christians can't hold the country's highest office. Syria's president must be a Muslim, according to the constitution that was revised by Assad in 2012, carrying forward a provision in previous Syrian law.

Christians wanted to see the constitution changed so that a person of any religion could be president, according to Bishop Nalbandian. That clause is "not democratic. But in this crisis we didn’t raise our voice to change it."

That issue reveals the fragile relations between Christians and the majority Muslim community, one that is exacerbated by the militancy of the Islamists in the opposition. Hagop remembered that in 1973 Hafez al-Assad tried to change the old constitution to allow a president be from any religion. Conservative Muslims protested and dozens were killed in large demonstrations against the ruling Baath Party.

"So I'm not sure if the provision that the president must be Muslim reflects Baath policy or popular will," Hagop said with a shrug. "The people want a Muslim president."

Bishop Nalbandian said making democratic changes in Syria will take time. "Democracy is not an item to be bought in a store," he said. "It is a process."

But the larger question of Christian democratic rights are sidelined so long as the civil war rages. One recent day Armenian Orthodox families gathered at an Old City church for the funeral of four children who died when a rebel mortar hit their school.

A relative of one of the victims, Amira Hana, cries as she describes the explosion.

"We went running to the school to find out what took place," she said. "All the buses were completely destroyed. Blood was all over the ground."

Bishop Nalbandian, who presided at the funeral, criticized the rebels who intentionally target civilian areas.

"I can't understand what kind of vision, what kind of ideology they have," he said. "I do know that they don't pursue freedom or democracy as they say. They are actually criminals."

He says indiscriminate attacks on civilians are a war crime. "What they are doing isn’t against the government. It’s against humanity. I'm speechless."

For its part, according to human rights groups, the government indiscriminately shells civilians in rebel-held neighborhoods. Human Rights Watch has documented dozens of examples of government artillery and missile attacks that killed thousands of civilians.

Indeed all of Damascus reverberates with the sounds of Syrian Army artillery and machine gun fire as soldiers attack rebel-held areas full of civilians. The civil war has taken its toll on the Christian community. Some have fled to neighboring Lebanon. Hagop has hunkered down in his home town, which so far, has not come under direct, rebel attack. He said the old religious tolerance is likely gone forever.

"There is too much antagonism, too much hatred," he said. "Maybe the government can win militarily in a few years, but how do you change people’s attitudes? We’ll need years of education."

For his part, Bishop Nalbandian has been shaken up by the shelling of Damascus and the death of the four children from his church.

Bishop Nalbandian says he and other Christians will somehow endure — as they have many crises before.

Special Correspondent Reese Erlich reported from Syria with a travel grant from the Pulitzer Center on Crisis Reporting. His book on the Syrian uprising will be published by Prometheus Books next fall.