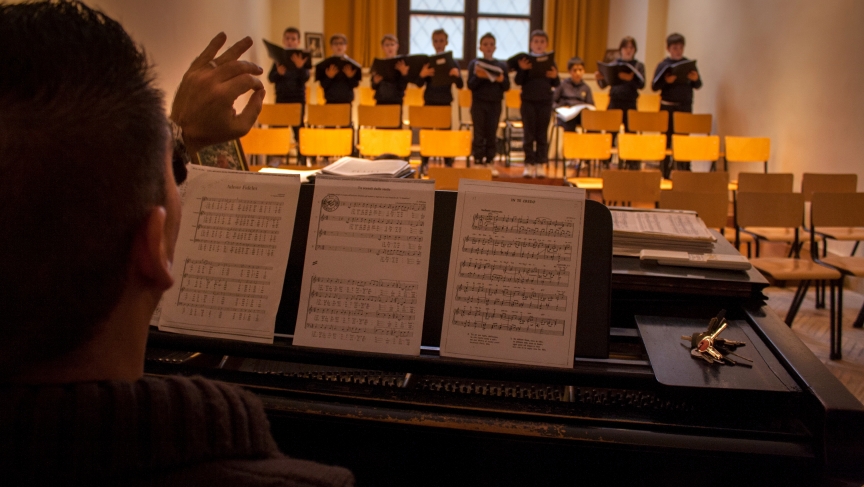 A group of young boys from a Catholic School in Rome undertake their daily lessons. Here, reading music is as vital as math and grammar. The teaching is strict: theory and vocal technique before lunch, after that, rehearsal.

At the Schola Puerorum (Latin for Boys School), Vatican teachers attempt to transform 9, 10 and 11-year-old boys into professional singers. They are plucked from parishes and schools around Rome to sing in the Sistine Chapel Choir — in other words, the Pope's choir.

It's up to music teacher Adriano Caroletti to make sure the third graders have what it takes.

“It's not easy to talk to an 8-year-old about breathing from the diaphragm and vocal posture, he explains. “You need to know how to approach them, make it a game for them. Only then can you explain to them that they must become mini-professionals. It's really not easy.”

Caroletti would know. He, too, was once a student at the school.

“As a kid, you are confronted with this climate, this musical experience that stays with you for your entire life,” he says.

The choir's been around since the Middle Ages. Back then, women were banned from all aspects of the ministry, so pre-teen boys complemented baritones and tenors. Today, the Vatican still argues, their unique high-pitch timber cannot be produced by girls.

The choir performs all year long, and at special ceremonies. The boys sang at Pope Francis' inaugural mass last March. Soon they will be with the Pope again, for Christmas in St. Peter's Basilica.

For choir boy Beniamino, it will be an emotional event. It's the first time he’s singing at Christmas with the Pope.

It's also a big, big responsibility. Imagine being told that you are the Pope's special little helper. So, the last thing you want to do is let down Pope Francis.

For 9-year-old Francesco, it's a real job. He says that if the boys make a mistake, it's as if the Pope messed up. If they sing flat, it's like they're embarrassing him personally.

It's possible the kids might have gotten that idea from the Sistine Chapel Choir Director, Monsignor Massimo Palombella, a priest and composer. Palombella is intensely focused and a bit on edge, but very effective.

“What's most surprising about these children is that, if you create the right educational climate, they are capable of the highest professionalism,” says Palombella. “I would dare say a level of professionalism that goes beyond adult singers in terms of commitment, motivation, and preciseness.“

But not without more practice. So, Palombella invites me to leave. He then turns to his singers, raises his hands and rehearsal begins again.