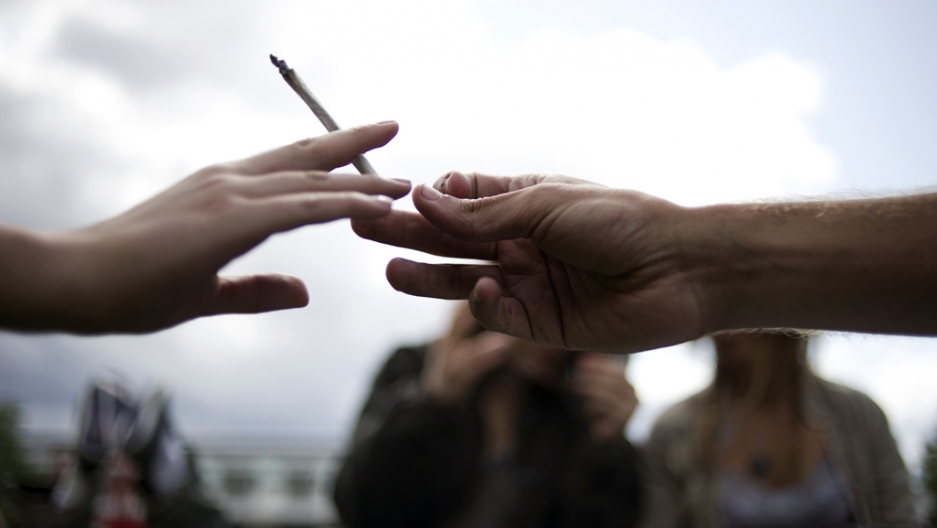 LIMA, Peru — Argentina has given the first sign that Uruguay’s groundbreaking cannabis reform just may have started a domino effect across Latin America.

Following the momentous vote by its smaller neighbor’s senate this month — making it the first nation in the world to completely legalize the soft drug — Argentina’s anti-drug czar Juan Carlos Molina has called for a public discussion in his country about emulating the measure.

“Argentina deserves a good debate about this,” Molina told local radio. “We have the capacity to do it. We should not underestimate ourselves.”

His comments are the clearest sign yet that Uruguay’s strategy — aimed at breaking the link between the lucrative marijuana trade and organized crime — has kicked off a trend in a region that long ago wearied of the bloodshed, expense and failed results of Washington’s “war on drugs.”

“In the same way that Colorado and Washington had a catalytic impact on opinion across the US, this bold move by Uruguay is helping to shape the debate in Latin America,” he said.

And although Nadelmann acknowledged that many in the region are still opposed to reforming cannabis laws, he predicted legalization would change hearts and minds just as it had north of the Rio Grande. Polling company Gallup shows a 10 percent bounce in the United States in favor of legalization since the two Western states’ referendums permitted recreational use.

Many Latin American countries already permit — or at least do not punish — possession of small amounts of marijuana for personal use.

According to the United Nations, some 8 million people (see page 176) have used cannabis in the last year in South and Central America.

Yet until Uruguay’s reform, no country in the region allowed the production or sale of cannabis. That has resulted in a confusing situation in which drugs bought illegally can be consumed lawfully.

Article 299 of Peru’s Criminal Code, for example, allows the possession of up to 8 grams (roughly a quarter of an ounce). Yet Peru, now the world’s largest cocaine producer, is one of Washington’s staunchest allies in the war on drugs.

And even Chile, which has many conservative laws thanks to its constitution drafted during the Pinochet dictatorship, permits individual adults to privately consume unlimited quantities of any drugs, including even seriously harmful substances such as amphetamines and crack.

Nevertheless, there remains some resistance in Latin America to the Uruguayan model of completely legalizing the cannabis supply chain.

Jorge Larranaga, a conservative who plans to run for Uruguay’s presidency in 2014, has vowed to repeal the law if elected. “Our children will say to us ‘But dad, how can it [cannabis] be bad, if the government legalized it?’” he warned.

But critics of prohibition, such as Uruguay’s President Jose Mujica, claim that by keeping the production and sale of pot in the shadows, governments have gifted large profits to criminals, lost influence among users in a key area of public health, and even forgone significant tax revenues.

Instead, at Washington’s behest, states are spending billions of dollars on the often futile, often violent pursuit of drug traffickers, and locking up hundreds of thousands of people for petty narcotics crimes.

Some 70 percent of all women in Latin American jails are there for drug offenses, according to a recent report by the International Drug Policy Consortium. Many of them were convicted for acting as mules to transport forbidden substances clandestinely, including the dangerous practice of hiding their illicit cargo in their own bodies.

Many governments in the region are already in favor of dropping, or at least relaxing, the hard-line prohibitionist approach to drugs first launched by the Nixon administration — which has failed to stem rising consumption of cannabis, cocaine and other banned substances over the last 40 years.

Importantly, several of the leading voices in the debate have come from conservative politicians — rather than just leftists like Mujica and Fernandez de Kirchner — including the current presidents of Colombia and Guatemala.

GlobalPost in-depth series: The Americas are hooked on the burning question of whether to legalize drugs

The legalization movement still faces an uphill struggle against public opinion. Across the region, approval for legalizing cannabis is around 35 percent, says Nadelmann, compared to around 45 percent in the United States before the Colorado and Washington votes.

Even most Uruguayans oppose their country’s new approach. It only passed through congress thanks to the outspoken stand of President Mujica, a 78-year-old former leftist guerrilla, and unusually strong party discipline that compelled some lawmakers to vote against their consciences.

Those figures vary greatly by generation, arguably making change a question of when rather than if.

A recent study looking at the attitudes of young people found that in Buenos Aires, 81 percent supported legalization, while the figure in Santiago was 79 percent, and in Mexico City it was 73 percent.

One country likely to at least look at legalization is Chile, where socialist Michelle Bachelet was re-elected president this month. Her campaign was publicly committed to reviewing marijuana’s current classification as a hard drug.

That surreal labeling might give a stoner the giggles but, perhaps more importantly, it has also prevented the use of cannabis to treat diseases in the South American nation; reclassification could therefore pave the way for medical marijuana in Chile, a potential first step toward permitting recreational use.

“Chile now has to decide what drug policy it wants,” said Eduardo Vergara, director of the Santiago-based Latin American Observatory on Drugs Policy. “Does it want one focused on human rights and public health, or just one of law and order?”

The rest of Latin America too, it seems. And given Washington’s waning influence in the region, maintaining the war on drugs south of the US border may become an increasingly forlorn strategy, thanks in no small part to tiny Uruguay.