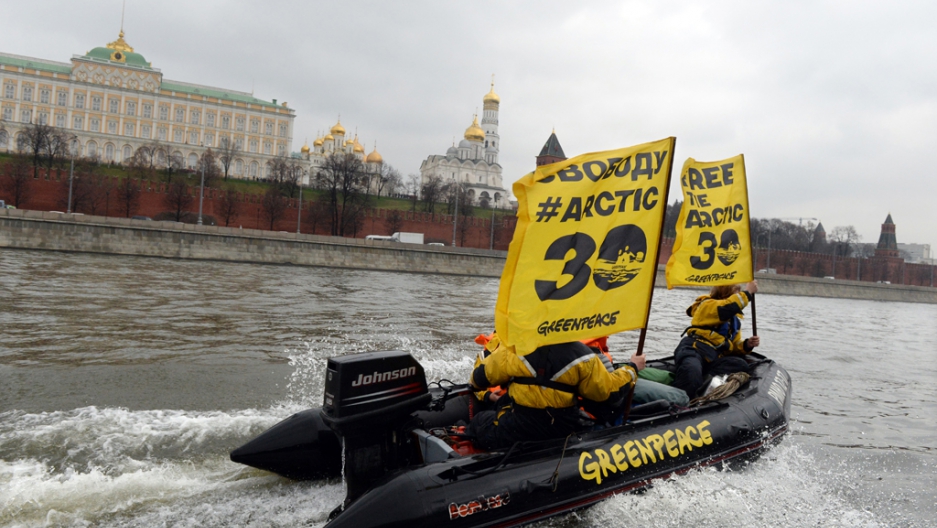 Greenpeace activists hold flags reading "Free the Arctic 30" as they go past the Kremlin by boat on November 6, 2013, in Moscow.
Credit: AFP
Share

Authorities in Russia have dropped its first criminal case against the "Arctic 30," a group of 28 Greenpeace activists and two journalists who have been detained there since September, as part of a wide-reaching Russian amnesty law.

Welsh native Anthony Perrett will leave Russia soon, the first of the group to be permitted to leave St Petersburg once he has secured proper exist documentation. Under the new amnesty law, it's expected that the 26 other non-Russians will soon be permitted to walk free as well, wrote the BBC.

The thirty detainees were initially taken into custody after two of the activists climbed a Barents Sea oil rig owned by the Gazprom company, protesting against offshore oil prospecting, wrote AFP.

Their ship, the Dutch-flagged Arctic Sunrise, was taken into custody by Russian authorities, while the protesters and journalists were accused of piracy, a charge that was then changed to hooliganism, according to the Associated Press.

Like Tolokonnikova and Alyokhina, the Greenpeace activists maintain that they did nothing wrong.

“I might soon be going home to my family, but I should never have been charged and jailed in the first place. We sailed north to bear witness to a profound environmental threat but our ship was stormed by masked men wielding knives and guns," said Arctic Sunrise captain Peter Wilcox, in a statement published by Greenpeace.

"Now it’s nearly over and we may soon be truly free, but there’s no amnesty for the Arctic," said Wilcox.