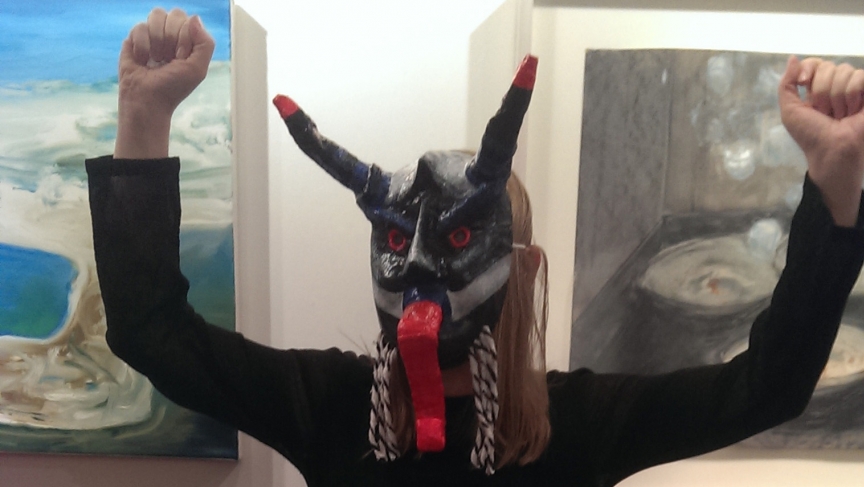 Joanna Ebenstein, founder of Morbid Anatomy, in a Krampus mask.

Do you remember that awesome fairy tale, about the little girl who cut off her finger so her bone could open the cage where her brothers were held prisoner?

It’s called "The Seven Ravens" and it’s from the Brothers Grimm. In my Russian family, that’s what we called a bedtime story. Growing up with these dark, unpredictable tales somehow changed me; Disney always came off as too safe, too happy. And ditto for that most cheerful of holidays — Christmas.

So I when I heard about a party celebrating — not St. Nick — but Krampus, his “cloven-hooved, chain-swinging, Eastern-European sidekick,” I thought, that sounds fun.

Joanna Ebenstein is the founder of Morbid Anatomy Library, which has been hosting Krampusfest for years now. She discovered the anti-Santa in 1994, at a Burger King in Hungary.

“He had hooves, he had horns and he was carrying chains. I had never seen anything like this before. And they explained, Oh that’s Krampus. You guys don’t have Krampus?”

Joanna says she was surprised to learn that there was ever a dark part of Christmas.

“They say Santa knows if you’re going to be naughty or nice, but really, nothing happens if you’re naughty. If you’re naughty in Hungary, you could get hauled away by this demon and beaten with chains,” she says. “It’s a very different situation. I just thought it was kind of fascinating.”

Joanna finds a lot of strange things kind of fascinating. A lot of things she’s fascinated by are also kind of ... dead. As I chatted with her at Morbid Anatomy in Brooklyn, I was facing a real human skeleton and a two-headed taxidermied duck.

“My whole life I’ve been called morbid for being interested in these things,” Joanna says. “I don’t find it dark. I find that any curious human being wants to know about this stuff. That’s how I feel about it. It’s just my own curiosity unfettered by conventions.”

I meet one of Joanna’s merrily morbid comrades the next night, at Krampusfest. Laetitia Berbier came here from Paris two years ago to work on her art history dissertation. She’s wearing a necklace made from coyote bones and what looks like the exact opposite of a Christmas sweater.

“It’s a Krampus sweater. I bought it on the internet,” Laetitia says. “In France, we don’t have a tradition of Christmas sweaters so when I came here and discovered this bizarre negative, tacky version of a Christmas sweater, I totally fall in love with it.”

Laetitia never went back to France, and she never finished the dissertation. Now she’s head librarian at Morbid Anatomy. She met her husband here, too — at a taxidermy competition.

I see him wandering around dressed, of course, as Krampus. This party is definitely more Halloween, less Christmas, but it’s anything but morbid.

Next year Morbid Anatomy will take over a three-story former nightclub and transform it into a museum. Joanna says their first exhibit will feature the whimsical taxidermy of the 19th century British artist Walter Potter.

I ask Joanna just what it is about obscure and morbid subject matter that so appeals to her, and I tell her I’m not immune, perhaps given my own childhood diet of dark fairy tales.

“When I was a kid, I really responded to things that didn’t have happy endings. You may call that dark, but it made me feel. And I liked feeling. Maybe that’s something Americans don’t like to do.”

Maybe. But Joanna will have a chance to change that: after seven years of running Morbid Anatomy Library as a labor of love, she has a new, salaried position as creative director of the Morbid Anatomy Museum.

But I don’t dare call that a happy ending.