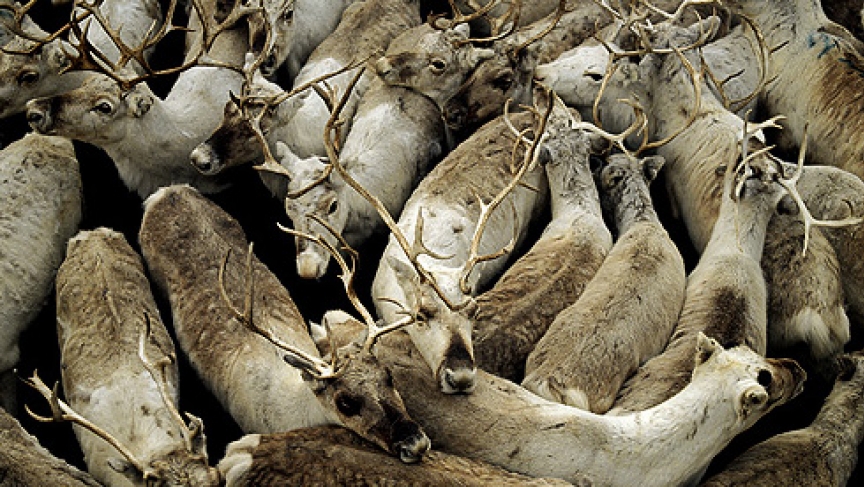 Ever wondered what sound a reindeer makes?

Clanet knows that clicking sound intimately. For the past eight years she's been documenting the reindeer of northern Norway and their reindeer herders known as the Sámi people.

Clanet makes the trek north by car, driving from her home in Paris to the small Sámi village of Máze where she spends one month each year.

As a little girl she was obsessed with the Arctic regions of the north.  She remembers reading the Swedish tale, "The Wonderful Adventure of Nils"  in which a little boy, Nils Holgersson flies around the different regions of Sweden on the back of goose. In his adventures he flies far, far north over the Swedish Lapland. Something about the flat, white tundra captured Clanet's imagination.

Lapland is a region within the Arctic Circle that covers Sweden, Finland, Norway and Russia. It's the land of polar nights and midnight sun.  It is also home to the Sámi.

Reindeer herding is the heart of the Sámi culture.

But herding reindeer is different than when you think of cowboys out west wrangling cattle. These reindeer are wild. The Sámi herders track them from a distance as they migrate each year. Still each reindeer is marked.

"They are marked in a traditional way with a special drawing made with a knife and each Sámi has his or her own marks," said Clanet.

The different marks says Clanet are actually registered in a book.

Clanet spend years alongside Sámi herders and they followed their migrating the herd. The result is a series of intimate photographs.