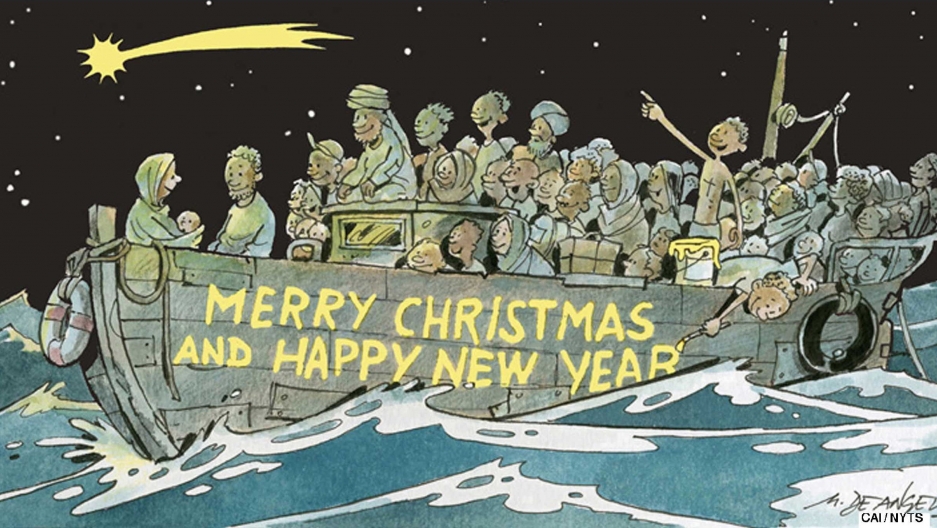 Italian cartoonist Marco De Angelis offers a Christmas reminder of the estimated 42,000 migrants who risked their lives to reach the shores of Italy in 2013, most of them in small fishing boats. As many as 600 died in the process, drowning in two shipwrecks en route to Europe. A large number of the migrants — who come from Eritrea, Somalia, Syria, Afghanistan, Egypt, Tunisia and many parts of sub-Saharan Africa — are still awaiting resettlement in Italy and other parts of Europe.

The men and women of the North American Aerospace Defense command are on the Santa-tracking case again this year.

NORAD's Christmas Eve Santa tracker has been monitoring Santa's trip around the world for decades, but in recent years it's taken on a digital-social-mobile dimension, rather than just being a hotline eager children could call.

Edward Snowden, the former National Security Agency contractor who leaked an untold number of pages of documents on US surveillance efforts to international media is celebrating his accomplishments this Christmas. In an interview with the Washington Post, one of the news outlets that first published his revelations, Snowden said he's "already won" — from the moment journalists were able to report on something that had previously been unknown to them. “All I wanted was for the public to be able to have a say in how they are governed,” he said. “That is a milestone we left a long time ago. Right now, all we are looking at are stretch goals.”

Islam is growing in the Latin American community

The Latin American community is known for its ties to the Catholic faith — ties that transcend religion into culture. But somewhere between 50,000 and 100,000 Latin Americans have chosen to embrace the Islamic faith. PRI's The World interviews a few Hispanics who have made the transition and looks at the reasons they chosen to say goodbye to the faith they were raised with and choose a different path. For many, it was a way to get control over demons that had troubled them for much of their lives.

The ethnic violence that is roiling South Sudan reached a troubling milestone Tuesday, with UN peacekeepers reporting they'd found a mass grave with 75 bodies in Unity State, according to the BBC. There are reports of more mass graves in the capital of Juba. UN Secretary-General Ban Ki-moon was urgently seeking to double the number of peacekeepers deployed to the world's newest nation in an effort to stem the violence and protect civillians from ethnic cleansing. President Barack Obama deployed 150 Marines and transportation aircraft to nearby Djibouti in case they're needed to evacuate the remaining Americans from the country.

DJ prepares to blast off

Mandla Maseko, a DJ from a township near Pretoria, will become the first black African to go into space, riding a Lynx mark II shuttle 62 miles up. Maseko is able to go into space because of a contest he won. As part of his trip, he came to the US in December to participate in a space camp in Orlando, Fla., according to The Guardian. Maseko is one of 23 young people to win the contest and be awarded a seat into space.

A selfie in any language

Language these days changes at the speed of Twitter. A word gets introduced one day and almost overnight it can be incorporated into any language. Selfie, the word of the year according to many linguists, is not just an English language word, though. PRI's The World reports on how selfie and other words have migrated from one language to another.

It's expected to be a smoggy Christmas in northeast China. Persistent air pollution continued Tuesday, prompting smog warnings, according to the South China Morning Post. The US Embassy's air pollution monitoring system reported the atmosphere as "hazardous" — the most toxic level. Weather conditions are expected to change by Wednesday evening, allowing some of the pollutants to finally disperse.