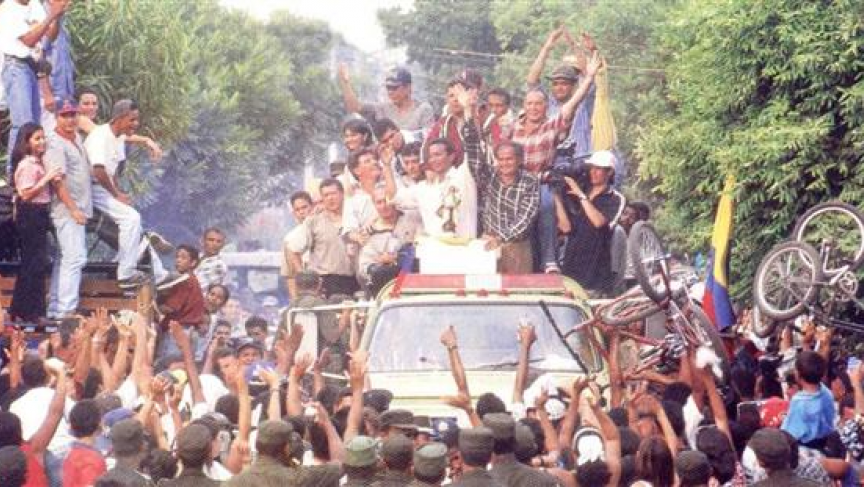 Diomedes Diaz is paraded through the streets of Valledupar, Colombia, after the release of one of his albums.

Vallenato singer Diomedes Diaz's death at the young age of 56 is a huge story in Bogota.

"Not only was his music great, but Diaz was a larger-than-life personality and criminal," reporter John Otis says.

Diaz, who was found dead in his bed a few days ago, was convicted of manslaughter after a night of drugs and sex with a 24-year-old girl who overdosed. He dumped her body in a cow pasture and fled to the hills where he took refuge with paramilitary death squads.

"When he finally surrendered, prison guards allowed him to record three CDs from his jail cell," Otis says. "After a few years he was released and made a triumphant comeback tour. All was forgiven."

Otis profiled Diaz during the Colombian singer's comeback tour, at the height of Diaz' musical career. At one point on the tour, during a news conference, Diaz reflected on his troubled past. He refused to apologize to the victim's family, but he introduced a new song called Pardon.

"You may have thousands of reasons to scold me;
But I feel like I deserve another chance;
Because I've also done many good deeds;
So, everybody should forgive me."

However you might judge Diaz and his checkered past, his music remains incredibly popular. Diaz won a Latin Grammy award for the best vallenato album in 2010 and just recently released a new CD, La Vida del Maestro (Life of the Master). It's safe to say his music lives on in Colombia.

"You can hear his music every day on the radio, especially if you're up in northern Colombia. That's the cradle of Vallenato music, it's just king there. You'll hear it everywhere, and kids, instead of growing up and wanting to be a rock star, and guitar heroes, they'll want to be an accordian hero and play Vallenato music and emulate Diomedes Diaz," Otis says.