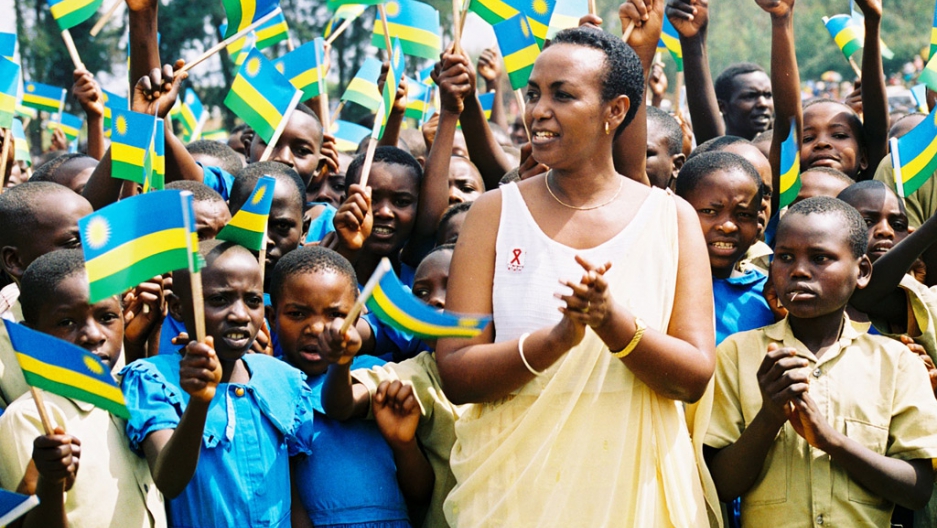 The late Aloisea Inyumba, then gender minister, stands in a Rwandan village. She placed 500,000 orphans with families after the genocide, ignoring Hutu and Tutsi distinctions.
Credit: Swanee Hunt
Share

This is the third piece in a five-part series. Read the second.

KIGALI, Rwanda — Senator Jeanne d’Arc Gakuba hadn’t considered getting into politics until she shadowed a city councilman in Tucson, Arizona and watched local leaders in Louisiana coping with poverty and crime.

It was 2000, and Gakuba had taken off a month from her job in Rwanda to participate in a young leaders program hosted by the U.S. State Department.

“It was just a couple of years after the genocide, and I felt it was important for local people to have a better understanding of what the government is planning for them,” Gakuba says.

“When I came back to Rwanda, I thought I might be involved somehow in governance.”

In 2001, Gakuba, a former high school teacher, was elected vice mayor of Kigali, a position she held for 10 years. Her eyes are animated as she describes that work. “I always wanted to support the community and be part of the rebuilding, because we started from ashes,” she says when asked how she felt when she first won. In 2011, that same electorate promoted Gakuba to the Senate.

Rwanda’s Parliament, based on its lower house, holds the world record for women’s representation – 64 percent – and has been first since the country’s initial elections after the 1994 cataclysm.

According to the constitution, 30 percent of seats are set aside for women. To cultivate a pipeline for political office, as gender minister the iconic late Aloisea Inyumba launched a five-tiered system of women’s councils for which they compete at every administrative level.

The next organic development was when the women’s caucus in Parliament made a strategic move: Members who had assumed the women’s seats during the 2003 election, and were therefore known publicly, vied for the 70 percent — the non-restricted party seats.

“We had our sisters coming up,” says Alphonsine Mukarugema, now president of the caucus. “I knew I would have no problem being reelected. But I wanted to leave that place for other women, so I presented myself as a general candidate.”

Political parties are also required to meet at least a 30 percent quota when drawing up their candidate lists, so the scene is set – stacked, really – for women to be well represented. Eventually, as social changes catch up with the equality machinations, quotas and rules won’t be necessary, leaders say.

Foreign Minister Louise Mushikiwabo insists that time is here. “Women’s gains are no longer about legal structures. Men and women see their capabilities and vote for them. This is a permanent cultural shift,” she tells me.

Hints of women’s advancement existed before the genocide, with the founding of Rwanda’s first women’s organizations and the rise of a handful of female politicians. But it was in the rebuilding where women asserted themselves – out of necessity.

“The people around me were women,” says a Rwandan priest assigned to a church that had been burned, then bulldozed, with hundreds of people inside. “Women helped me reconstruct the parish, physically and in terms of the community,” he explains.

“The way I saw it, men were more affected by the violence, even though I think women suffered more. After, men couldn’t do much. Women saw that they had no alternative.”

Rwanda’s brand of women’s revolution is not about competing with men. Their leadership advantage comes from being mothers, Rwandans tell me time and again, a sentiment that would vex many Western feminists.

And even as they assume increasingly prominent posts, women feel obliged to stay true to their social responsibilities, primarily family, I hear often. Already juggling responsibilities with family and farm in rural Rwanda, many women are deterred from pursuing politics because, in short, they already have too much work.

Senator Bernard Makuza, political advisor to the late Prime Minister Agathe Uwilingimana, remembers how Rwanda’s first and only woman to hold the office saw her unique role. Uwilingimana was killed on April 7, 1994, targeted as a moderate Hutu politician.

“I saw how this woman – at a very tense, difficult time politically – was occupied by her housework, conscious about caring for her children.

When there were visitors at the home, just like any other wife, she would be the one serving the beer!

When I said, ‘How do you manage all these small details?’ she’d say, “Listen, there are certain aptitudes we have, that have become reflexes for women, and just because I’ve become Prime Minister, those don’t go away.’”

Asked if 64 percent women isn’t off balance, I think, when was the last time we questioned whether 64/36 male/female ratio was too titled toward men?

At any rate, the growth in women’s roles has been steady over the course of a decade. Today gender in political leadership doesn’t seem to be an issue, except to the rest of the world.

Swanee Hunt, former US Ambassador to Austria, is chair of The Institute for Inclusive Security, and is the Eleanor Roosevelt Lecturer in Public Policy at Harvard’s Kennedy School of Government.