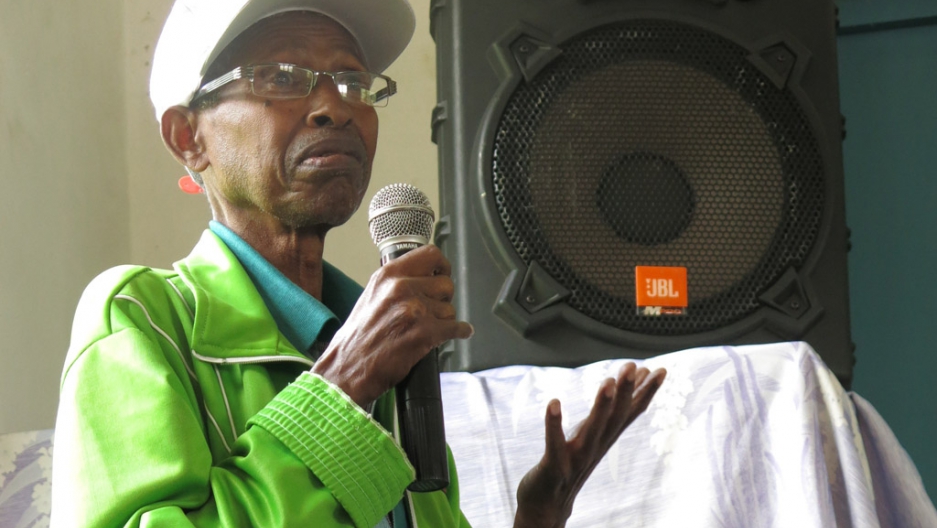 At the "I Am Rwandan" meeting in Kigali, a man stands to ask for unity among Hutu and Tutsi.
Credit: Swanee Hunt
Share

This is the fourth piece in a five-part series. Read the third.

Her office has started up projects advancing children, particularly girls, and providing what a business school might dub a “proof of concept” as their promotion has evolved into public policy. This particular experiment, obligatory across the rural countryside, is Ndi Umunyarwanda, ‘I Am Rwandan.’

Twenty years since the 100-day genocide of 800,000 Tutsi and moderate Hutu, “It’s to help people not be confused about the Hutu perpetrators, not to listen to their parents who are keeping alive old hatred,” I’m told by a friend interpreting for me at her neighborhood gathering.

That said, few youth are in attendance, even though the country’s median age is less than 19.

But as the hours unfold, it’s not clear the primary purpose is for the younger generation, for whom the genocide is a story, not a memory. Instead, these gatherings are trauma therapy en masse.

The meeting is in a rectangular room with two-toned walls and imposing turquoise doors.

Windows with large plastic slats frame palm tree branches outside and allow in light and breeze. Attendees, mostly men, are seated in popsicle orange, yellow, red, and purple plastic chairs. Some hundred are jammed inside, 50 outside. Loudspeakers boom through the room and the yard.

A young woman leads the crowd in a song, clapping and hopping as she belts out, “Peace is the responsibility of every Rwandan (‘Yes!’ sings the audience chorus) … lt’s good to love our country (Yes!)… We are all relatives (Yes!)… Women, young, old, the whole country (Yes!)…Our identity should have no discrimination (Yes!)…We fought genocide (Yes!).”

The music ends, and she shouts into the microphone in a Pentecostal tone, gesticulating wildly: “Being Hutu, Tutsi, Twa is not paramount. Most important is being Rwandan. Non-Rwandans don’t recognize us anymore, because they can’t believe our identity is Rwandan.”

Now she launches into another raucous song. “We had a king,” her voice bounces off the walls. “He had slaves but never discriminated until missionaries came. They colonized us by teaching our country ‘divide and rule.’”

A documentary begins to roll. “In the old days,” the narrator explains nostalgically, “young Rwandans were taught our history, how to wage war, how to dance.” Fascinating black-and-white-flecked clips follow: first French Catholic missionaries, then Hutu political leaders making outrageous allegations about the Tutsi minority.

Jean Kambanda, prime minister during the genocide, is wearing camouflage, even though he is not in the army. He holds up a pistol. “Everyone can have a gun,” he shouts. “They came with machetes yesterday to arm the militias. The ones for you are on the way. In 10 days you can finish this!”

The genocide itself is given about 10 seconds. “Everyone knows that part,” someone whispers to me.

The film ends with the Rwandan Patriotic Front leader, Paul Kagame, who has de facto led the country ever since the genocide.

“We must be inclusive and just. We must not have politics of hate. We have died many times; it’s time for us to live.”

After the documentary, the audience focuses on three leaders sitting behind a long table. The first is a young man: “We were 18 clans, but we didn’t discriminate among Hutu farmers, Tutsi cattlemen, Twa potters. Rwandans were living in harmony until missionaries started teaching about differences…. The missionaries taught that Hutu are the true Rwandans. But we can’t blame everything on the colonizer; Rwandan ourselves believed the strangers as they urged genocide.”

The second speaker — Mathilde – explains the central purpose of the meeting.

“It’s time to tell each other your experiences, even if you disagree with each other." To do that, Mathilde says, “Everyone must open up. People’s children must know the truth, but even as we tell them, let’s remember the good and forget the bad.”

A man in his 30s begins the testimonials. “I’m Rwandan.” The audience claps. “I lost my father, mother, and grandfather. My other grandfather said, run away and hide in a safe place. I have wounds from my history, but I’m better than I was at the time of the genocide.” More clapping.

And so an hour passes, as one person after another stands and tells a 20-year-old tale of suffering, losses, fear, abuse. But each story ends with the strong assertion of forward-looking unity, “I am Rwandan.”

Will this national soul-baring be unifying? Two decades of silence have muted a festering pain. “Some are ready to talk about the past, others are not yet. Some will never be,” the First Lady tells me. “But many who come forward with their stories will feel heard, respected – and that’s an essential part of healing.”

Swanee Hunt, former US Ambassador to Austria, is the Eleanor Roosevelt Lecturer in Public Policy at Harvard’s Kennedy School of Government.