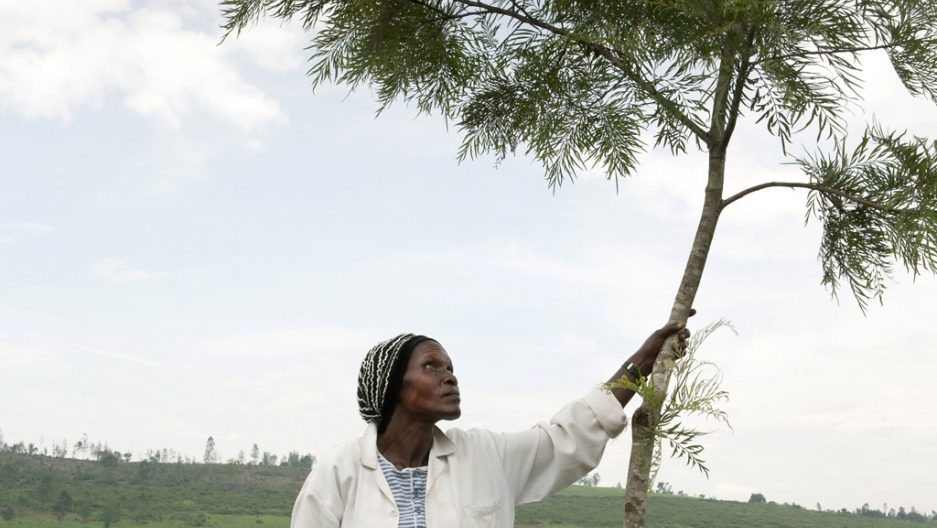 Jeanne d’Arc Mukarenyange an ex-FAR soldier and a reservist for RPF is a member of farming cooperative for veterans. Jeanne stands on the collectives farmland in Kigali, Rwanda.
Credit: Rwandan Women Rising
Share

This is the first piece in a five-part series.

KIGALI, Rwanda — From the airport hilltop at night, looking down on the city of Kigali is like looking up in the sky.

With its progressive policies — and achievements — on matters ranging from the environment to health care, inclusive governance to corruption, this small central African nation stands out not just because of its strides and stability compared to its neighbors and other low-income countries.

Rwanda’s accomplishments are extraordinary given that its current trajectory began in complete social and political chaos following the 1994 genocide.

Next year, the world will mark 20 years since that disgraceful emblem of humanity’s failure. Now, ahead of the ignominious anniversary, it’s restorative to reflect on the rebuilding successes.

For a visitor arriving for the first time, it’s almost incomprehensible that such a dark period — 100 days of machetes and mass murder — recently enveloped this fresh-aired country of terraced jade fields, fragrant eucalyptus forests, and dewy volcanoes.

Even when I first arrived in 2000 to speak at a conference called Women as Partners for Peace, it was clear Rwandans still faced major encumbrances: a government in major transition, its members operating with an ad hoc “all hands on deck” attitude, a constitution still three years away, and prisons teeming with hundreds of thousands of citizens accused of genocide crimes as the impossibly-burdened judicial system made its way through case by harrowing case.

I remember being immediately impressed by the strong foundation the government was putting in place to elevate women as a stabilizing force.

Paul Kagame, who had newly assumed the presidency (though powerful in various capacities since commanding the rebel movement in the early 1990s), invited me to return to Rwanda to lead workshops for established and aspiring women leaders he had appointed over the prior year. My initial surprise came when I entered the conference room expecting to find maybe seven women there for the day-long training. Instead, there were 70.

Then, I was startled and impressed when the President and First Lady Jeannette Kagame returned to their seats after offering opening words — and stayed for the entire session. Their personal involvement demonstrated the depth of their beliefs in an approach to post-conflict rebuilding otherwise untested in the world: to concertedly strive to utilize the recovering country’s full potential of human capital, by promoting women’s involvement.

For 13 years I’ve been making regular visits, and now I was returning to complete research for my upcoming book highlighting Rwandan women’s extraordinary story: daughters replacing mothers whose leadership was tested by years of conflict, oversight of progressive policies, and self-confidence that has soared.

Between 2006 and 2011, poverty has decreased markedly as the economy has grown by an average of eight percent the past five years. Near-universal insurance has increased access to health care to remarkable effect. Life expectancy has risen from 48 to 58 in just the last 10 years. Renowned physician Paul Farmer explained to me why his global Partners in Health group has its largest presence here, employing more than 5,000 people: “We get more done in Rwanda than anywhere else in the world.”

The government’s strict stance against corruption has underlied much of this progress. It has been a hallmark of President Kagame’s leadership and earned him accolades, even as critics claim the policy has been abused to discredit allies who fall from grace. Regardless, numerous rankings situate Rwanda among the least corrupt countries in Africa and one of the easiest places to do business.

And so Rwanda is emerging from destruction with unimagined progress.

This series of four commentaries lays out stories illustrating the transformation of Rwandan society: the 2013 Day of National Dialogue, during which the President holds politicians accountable for their promised achievements; women’s historic ascension in all levels of political positions; their incipient but expanding progress in the private economy; the new “I Am Rwandan” initiative, intended to unite a populace torn asunder first by ethnicity-based discrimination, then murderous atrocities.

Political criticism aside (and there is plenty), strong-armed President Kagame is leading some of the most clearly-focused new social policies in the world.

We would do well to open our minds — and checkbooks — to promulgate global lessons from this tiny African state.

Swanee Hunt, former US Ambassador to Austria, is the Eleanor Roosevelt Lecturer in Public Policy at Harvard’s Kennedy School of Government.