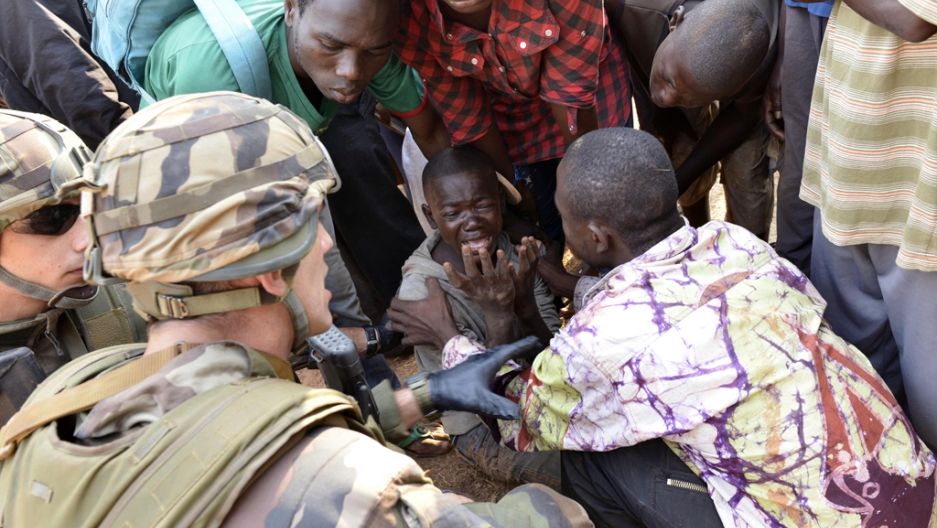 French troops of the Sangaris operation and civilians try to comfort a boy crying after a demonstrator was shot dead near the international airport in Bangui on December 23, 2013.
Credit: MIGUEL MEDINA
Share

Bangui, the capital of the Central African Republic, was wracked by violence Monday, as multiple reports detailed clashes between peacekeeping troops and protesters.

At least one person was killed when African Union troops fired on demonstrators Monday morning, according to Agence-France Presse.

The protesters reportedly threw rocks at AU troops when they approached, and the soldiers fired into the air and toward the crowd.

More from GlobalPost: In the past two weeks, this conflict has displaced more than 200,000 people in one city

Reuters confirmed the report of protesters clashing with AU troops from Chad, though it said the AU did not confirm the death of the protester.

A spokesman for Medecins Sans Frontieres said around 40 people were treated for injuries after the clash near the airport.

Locals view the Chadian peacekeeping troops with suspicion, as they believe Chadian President Idriss Deby Itno to have aided the Muslim majority Seleka rebellion in the CAR that ousted President Francois Bozize in March.

Shouts of "No Chadians in Bangui!" could be heard from the crowd on Monday.

Meanwhile, the Associated Press reported that a Muslim man and his son were lynched by a crowd of Christians near the airport Monday.

A witness told the AP a Muslim family came from the opposite direction of the crowd, the man waving a gun and shooting into the air. The witness said "the mob surrounded the man, lynching him and his son. His wife was able to run away."

France has deployed 1,600 troops to its former colony to protect civilians, a move mostly welcomed by the Christian majority. On Sunday, several thousand Muslim supporters of the Seleka rebels protested against the French presence.

The sectarian violence has already forced more than 700,000 people from their homes, with some 210,000 fleeing Bangui within just the last few weeks.