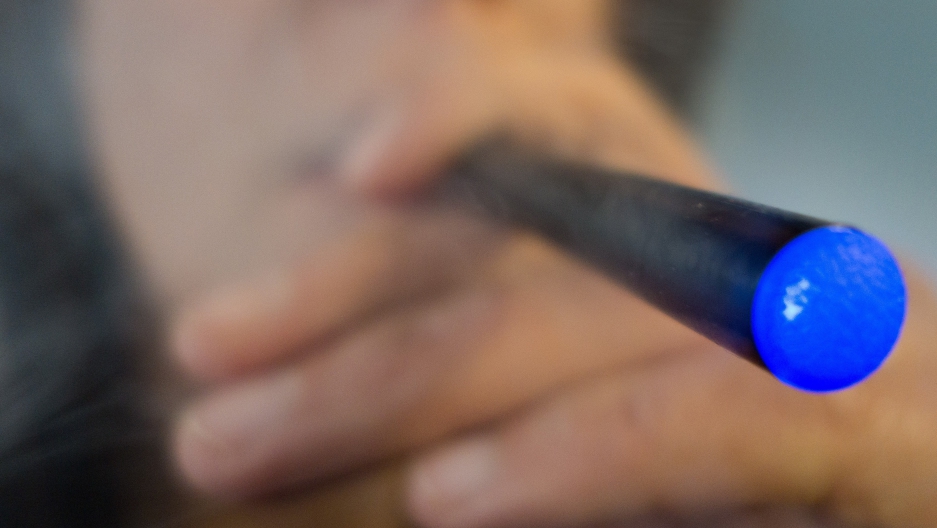 “No one knows how things will turn out.”
Credit: Paul J. Richards
Share

BORDEAUX, France — As more smokers take to electronic cigarettes, the debate about the impact “vaping” — as using the products is called — could have in the fight against tobacco smoking is becoming more acute.

On one side, the head of one of Europe’s leading electronic cigarette industry groups has slammed the World Health Organization (WHO) for its lack of support for the booming e-cigarette market.

Katherine Devlin, president of the Electronic Cigarette Industry Trade Association, whose members represent some 60 percent of the British market, said the WHO’s reluctance to endorse e-cigarettes is putting millions of lives at risk.

“WHO has led a campaign against smoking which has led to the denormalization not only of smoking, but also of smokers, many of whom now feel like social pariahs,” she said in an interview.

Vaping, she said, is a cleaner way of ingesting nicotine.

“Our hope is that by normalizing vaping, we can help to further underline the message that smokers need to stop setting fire to tobacco sticks and inhaling the smoke.”

But experts say more research is needed before definitive conclusions can be made.

“Not enough is known yet about the health effects of using e-cigarettes, especially over the long term,” Angela Pratt of WHO’s Tobacco Free Initiative told GlobalPost.

“There are now hundreds of e-cigarette products on the market with little if any regulation of their contents in some countries. Consumers can't always know what they are consuming when they use these devices.”

How to regulate the e-cigarette industry is posing problems for lawmakers worldwide.

The chair of France’s Office of Smoking Prevention, Bertrand Dautzenberg, has described e-cigarettes as “marvelous news in the fight against tobacco,” a position apparently undermined by a recent Toulouse court ruling that e-cigarettes should only be sold by licensed tobacconists.

The ruling is seen as a win for the tobacco industry because it could force the closure of more than 140 independent e-cigarette shops across the country and provide tobacco companies — which are moving fast into vaping — with the lion’s share of the French e-cigarette market.

However, the European parliament last October voted against regulating e-cigarettes as a medicine, a move the e-cigarette lobbyist Devlin welcomed.

“Smoking is a behavior, not a disease,” she said. “Consumers don’t want to get their e-cigs from the doctor. They need to be available as widely as possible, so that all smokers know about them and can get access to them.”

In Britain, the government plans to regulate e-cigarettes as medicine from 2016.

Professor Robert West, of the Health Behavior Research Center at University College London, is at the forefront of e-cigarette research in the UK. He says that move is “problematic.”

“The cost would be prohibitive for most companies and would most likely leave the tobacco industry with the market,” he said.

He believes the e-cigarette market should be allowed to “flourish” as long as it doesn’t target non-smokers. However, he said the industry must first meet standard consumer legislation on safety and ensure vaping doesn’t expose consumers to dangerous levels of toxins.

“The challenge is coming up with a form of regulation that addresses the concerns but allows these products to flourish if they are effective at getting people off cigarettes,” he said.

Part of the debate concerns advertising.

The WHO’s Pratt says the organization has concerns about similarities between traditional tobacco advertising and marketing techniques used by some e-cigarette companies.

In the United States, some advertisements are similar to banned tobacco ads that oozed Hollywood cool.

In the UK, several recent ads have fallen foul of advertising codes, including one from the VIP electronic cigarette company that prompted outrage for alluding to oral sex.

As debate rages over safety and regulation, advertising and marketing appear to be the only points on which there’s at least some consensus.

“The advertising and marketing practices of the electronic cigarette industry need robust regulation,” said Devlin, who welcomed a current review of the UK’s e-cigarette advertising guidelines.

E-cigarettes shouldn’t appeal to children, she said, or “glamorize an activity which still looks like smoking.”

However, she said concerns that e-cigarettes could make smoking socially acceptable again were unfounded.

West — whose research in England shows that very few people who haven’t smoked tobacco are taking up e-cigarettes — around 0.5 percent of the total — agrees with Pratt that there’s a danger that e-cigarettes could be marketed in a way that also promotes tobacco smoking.

However, he is cautiously optimistic about the potential of e-cigarettes to reduce smoking-related deaths worldwide.

“Overall, I think there’s reason to believe that e-cigarettes are helping with getting rid of tobacco from our society, but it’s early days,” he said.

“The truth is that none of us knows how things will turn out,” he added, “which is why the best approach is to keep a close eye on it and be ready to step in quickly if things start to go bad.”