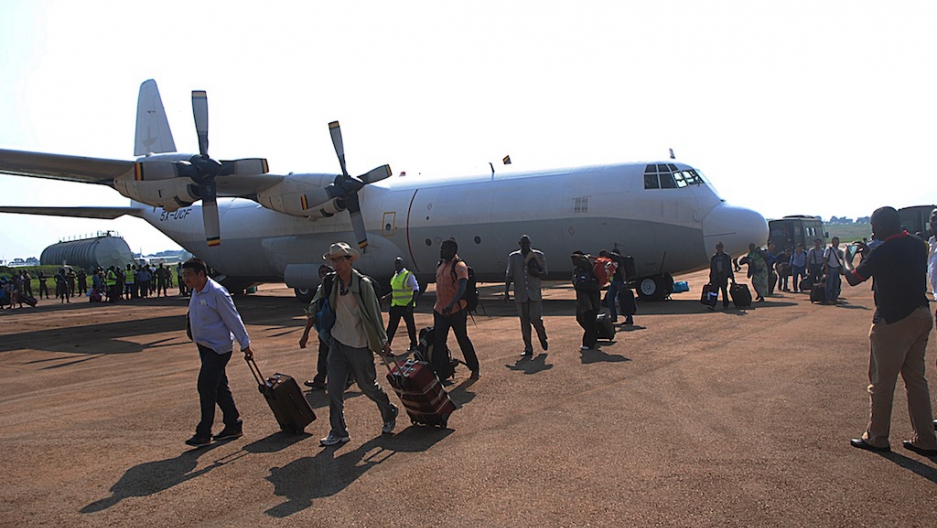 Unidentified shooters fired at an aircraft on a mission to evacuate American citizens from restive South Sudan on Saturday, injuring four US service members, according to the US military.

"After receiving fire from the ground while approaching the site, the aircraft diverted to an airfield outside the country and aborted the mission," the military's Africa Command said in a statement, according to Reuters.

The aircraft had been headed for Bor, the capital of Jonglei state, and then landed in Uganda's Entebbe airport, according to the BBC, which reported that at least two US evacuation flights had been fired upon.

At least 500 peopled have died in clashes after President Salva Kiir accused Riek Machar of attempting to overthrow the government about a week a week ago.

South Sudan military spokesman Col. Philip Aguer told the Associated Press that the state was not in control of Bor, and that Machar's renegade forces were present there, blaming them for attack on the US aircraft.

"Bor is under the control of the forces of Riek Machar," Aguer said.

President Obama said on Friday that South Sudan now "stands at the precipice," and called on the country's leaders to stop the violence, saying "recent fighting threatens to plunge South Sudan back into the dark days of its past."

The unrest has caused about 34,000 civilians to seek refuge at UN bases in Jonglei and the northern Unity State, while some 20,000 more have sought shelter with peacekeepers in Juba.