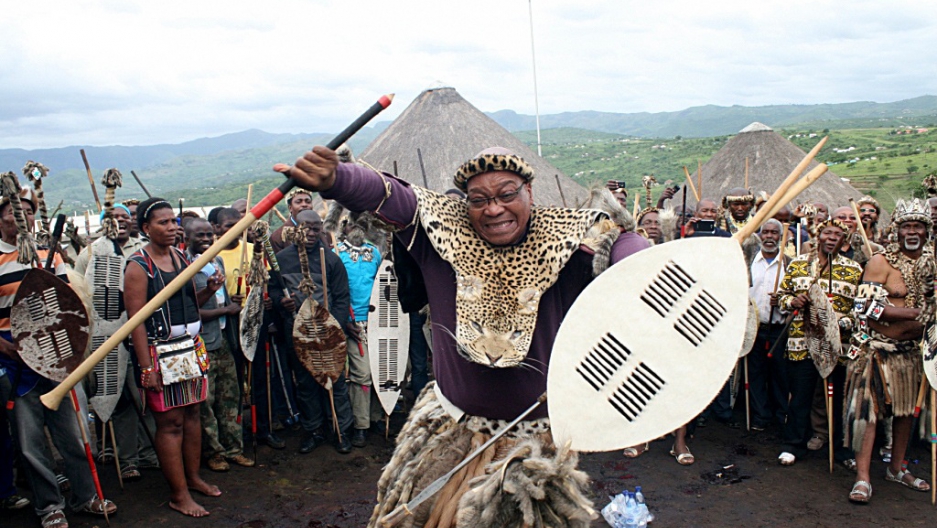 South Africa's President Jacob Zuma dances — during a traditional ritual performed to help him keep his job — at his rural homestead Nkandla on Nov. 25, 2012. Upgrades to the leader's private home have sparked controversy and calls for Zuma to resign.
Credit: Stringer
Share

That kind of display against the head of state, especially on a day reserved to honor democratic South Africa’s iconic first president, may have surprised onlookers from other countries. But it’s no secret here that South Africans have had it with their president.

One of the main reasons? A place called Nkandla. This is Zuma’s village home in rural KwaZulu-Natal province, which has been renovated since he took office in 2009 to the tune of $20 million in state funds — and become a byword for lavish spending by the ruling African National Congress (ANC).

A new report by the South African government defends Zuma against the accusation of abusing public money to upgrade his private home. But it will do little to defuse South Africans’ anger.

The official case for Zuma’s extravagance comes ready-made for mockery. The cattle enclosure, swimming pool and houses for Zuma’s relatives? All were necessary for security reasons, public works minister Thulas Nxesi said Thursday at the release of the report.

For example, that “so-called swimming pool” is actually a “fire pool,” Nxesi explained, in case one of the compound’s thatched roofs catches fire and needs water.

The cattle enclosure — known in South Africa as a “kraal,” or corral — had to be moved because the cows were disturbing the security system and causing false alarms. A cattle culvert was built because of the security risk caused by cows and people using the same entrance.

A “chicken run” was built within the cattle corral to replace buildings that were “potential hiding areas for intruders.”

And a tuck shop, or convenience store, owned by one of Zuma’s four wives had to be moved from outside the compound to a high-security area because the customers were a security threat. Neighboring families were also relocated for this reason.

The public was not reassured.

More from GlobalPost: A gray goodbye for beloved Madiba

Lindiwe Mazibuko, parliamentary leader of the opposition Democratic Alliance, called the explanations “frankly ludicrous,” while another party, the Congress of the People, said the report was a “whitewash.”

"South Africans will see through this poorly disguised ruse to ‘clear' President Zuma and provide shoddy — and at times ridiculous — explanations for the expenditure of public money on inexplicable luxuries,” Mazibuko said.

Ferial Haffajee, editor of South Africa’s weekly City Press newspaper, said the money spent on security at Nkandla sounds more “like the setting up of wartime operations in Iraq or Somalia or South Sudan.”

“For a man who has crafted an identity as KwaZulu-Natal’s peace-finder and a son of the rural soil, he (or his team) engaged a security project more befitting a genuinely besieged leader like Afghanistan’s Hamid Karzai,” Haffajee wrote.

As she noted in a column, the government’s own report admits that the presidential architect had no security clearance, nor did six of 15 contractors on the project. A company that had its clearance denied nevertheless continued to install security cameras.

The government’s accounting of the Nkandla upgrades — or “Prestige Project A,” as it was known — differs significantly from a provisional report by South Africa’s independent ombudsperson, the final version of which is due in mid-January.

A leaked copy of this report, which has the draft title “Opulence on a Grand Scale,” said that Zuma had derived substantial personal benefits from the upgrades, and called for him to repay some of the money.

While Zuma is expected to continue leading the ANC into next year’s elections, there is growing disquiet within the party over his leadership.

A recent poll of 1,000 ANC members around South Africa found that 51 percent wanted Zuma to resign, and 42 percent said he had abused taxpayer funds.

At the Mandela memorial service, the thousands of people booing Zuma whenever his image was shown on the big screen were mainly ANC members from the Johannesburg area.

The South African Communist Party — which is in an alliance with the ANC — has promised to name and shame those who booed Zuma.