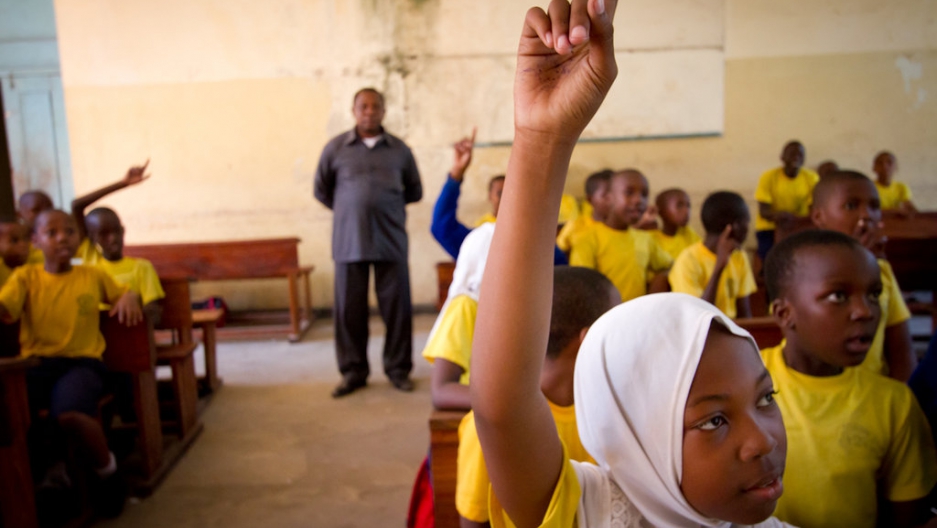 Children practice their English at Bunge Primary School in Dar es Salaam, Tanzania. Public schools throughout the country are crowded, and the average student/teacher ration is 48 to 1.
Credit: Jacob Kushner
Share

ARUSHA, Tanzania — Five days a week, Caroline Benedict Kessy stands before a class of 77 third-grade students and struggles to devise a way to teach all of them how to read and write.

The other two days she spends at home baking wedding cakes to sell. Each cake earns her an average of 300,000 shillings (about $187 US). That’s equivalent to half her monthly teaching salary for just one day of baking.

She isn’t alone. Kessy, 46, is among the tens of thousands of public school teachers in Tanzania who face monumental class sizes for meager pay. Many work two or three jobs to supplement their income, and some quit education altogether.

“Someone was working here for three years and then she (gave) up to sell stationary and phones,” said Kessy. Now, “she's making more money than we do.”

Although Tanzania spends a relatively high percentage of its GDP on education—nearly 7 percent—that money must be spread over an unusually large population of students.

Nearly half of Tanzania’s population is under the age of 15, largely the result of high fertility rates and a decrease in child mortality, according to an April report by the World Bank.

When Tanzania waived tuition fees for public primary school in 2001, the number of students who enrolled doubled in eight years. The number of registered teachers has continued to rise, but funding for their salaries hasn’t kept up, say leaders of the Tanzanian Teachers’ Union.

When Kessy began teaching in 1992 she earned 425,000 shillings per month and today she earns 600,000. But the Tanzanian shilling inflated approximately 250 percent during that time period, so her real wage is worth 45 percent less than when she began teaching nearly two decades ago.

The average secondary teacher in Tanzania with only standard training earns only 270,000 shillings (about $167 US) per month, according to Gratian Mukoba, president of the teachers’ union. Even teachers who hold an advanced degree earn only 350,000 ($216) on average.

“We at the trade union have been fighting tooth and nail to end this abuse,” said Mukoba. “Our strikes always end in court of law. (But) the judges decide the case in favor of the government.”

In July 2012, Mukoba’s union called a nationwide strike to demand a 100 percent pay raise and a travel allowance for teachers who must pay for public transportation to arrive at school. For five straight days, schools stopped as teachers refused to teach. But instead of granting those demands, Mukoba recalls how the government sought a court order to force the teachers back to work.

The Labour Division of the High Court of Tanzania determined the teachers’ strike illegal because they did not give the employer a means by which to negotiate with them.

“When the government went to court for an injunction, the court declared our strike illegal and told the government and the teachers to go back to the negotiating table to discuss the issues,” Mukoba said.

But he says nothing has come of those discussions. He says next time the teachers strike, they might not let themselves be fooled again.

To make its budget go further, Tanzania’s Institute of Education began training teachers for just one year instead of two years as it did in the past. The result is a pool of teachers who themselves are less qualified for a job whose demands have risen with the bulging class size.

When asked how long he’d been teaching, one math teacher pulled out his cell phone, opened the calculator application, and subtracted 1999 from 2013 to figure out that he’d been at it for 14 years.

Even for competent teachers, the work is further challenged by the fact that many families can’t afford books and other necessary school supplies for their children.

“In one class I have 11 books for 63 students,” lamented Fabiene Martin Sedoyeka, a colleague of Kessy’s at Uhuru Primary School in Arusha. “It affects the quality of education.”

On average, Tanzania has just one teacher for every 48 students, according to an African Development Bank country report.

“If I had smaller classes I could go around the class individually to help them,” Sedoyeka said. “It’s difficult for me to see the work that each of them is doing, so then at the end of the year you find 10 or 20 students that know nothing.”

Last year, a startling two-thirds of Tanzanian students who took the exam required to graduate from secondary school failed it.

Sedoyeka said the work of educating so many students at once with so few resources amplifies the challenge of fulfilling his teaching duties on such meager pay. He said ultimately the children are the ones to lose out because teachers often miss school to complete other odd jobs.

Kessy said she loves teaching and has been at it for more than 20 years. But in four more years, when she turns 50, she plans to ‘retire’ from education altogether and become a full-time cake baker.

“My friends, we went to college together, (but) they are very well off. They are businesswomen. They have boutiques, salons and their life is so much better than mine,” Kessy said. “They say, ‘Why don’t you leave this work?’”