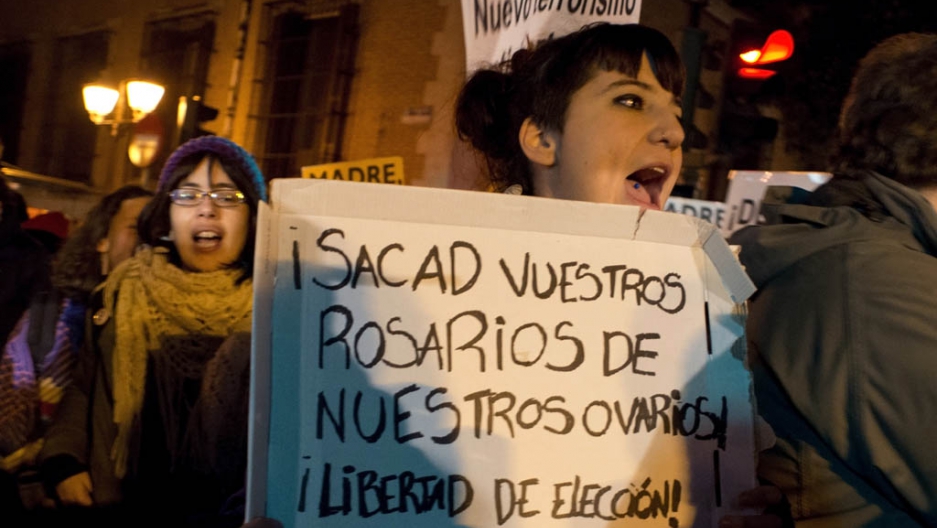 A woman holds a placard reading "Take off your rosaries out of our ovaries! Freedom of choice" during a pro-choice demonstration in Madrid against the government's plan to tighten abortion laws on Dec. 20, 2013.
Credit: JAVIER SORIANO
Share

Spain's conservative government moved to make it harder for women to get abortions, approving a restrictive new law Friday that critics say takes the country back to the 1980s.

The draft bill rolls back a 2010 law that allowed women to get an abortion without restrictions up until the 14th week of pregnancy.

Abortion would now only be allowed in case of rape or a threat to the mother's health.

Fetal deformities that would endanger a child's life if born would also be accepted, Justice Minister Alberto Ruiz-Gallardon said during a news conference.

Girls under 18 would have to again seek their parents' permission for the procedure.

The new rules would make Spain one of the most restrictive European countries on abortion and goes against the general trend there of greater access, according to Reuters.

Abortion rights groups took to the streets in protest Friday, claiming the law would return Spain to conditions similar to those under a more restrictive 1985 law.

The deputy leader of the main opposition Socialist Party, Elena Valenciano, vowed to fight the change.

The bill is likely to pass through parliament though, where the Popular Party holds a majority.