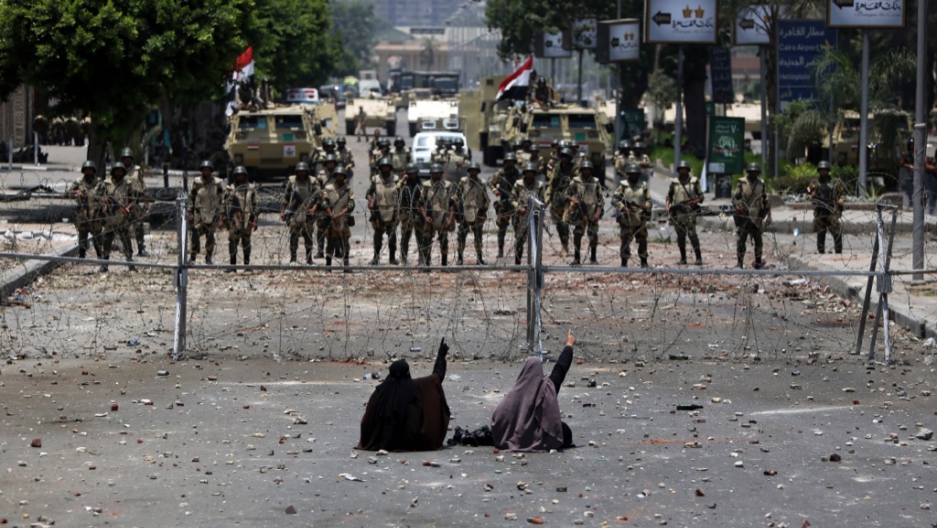 CAIRO, Egypt — Five and a half months after the military coup that unseated Egypt's former President Mohamed Morsi, a handful of his closest aides remain in military detention, incarcerated in the headquarters of the country’s elite Republican Guard.

Egypt’s new interim government has yet to formally acknowledge the aides’ military detention, instead maintaining that they have remained in a formal prison throughout this period.

But relatives of the men speak of months of worry and confusion, during which they have gleaned only a trickle of information about their loved ones’ whereabouts through occasional phone calls from inside the Republican Guard headquarters. Each of those has lasted for little more than a minute.

“They're usually on speakerphone, or sometimes the first speaker is someone I don't know,” a relative of Khaled al-Qazzaz, one of the aides, told GlobalPost. “Then they hand [him] the phone and he tells me he is OK and asks how the kids are.”

The relative spoke on condition of anonymity, a sign of the fear that has gripped families of Muslim Brotherhood figures who previously held some of the highest offices in the country.

Under international law, the conditions of the aides’ detention constitute enforced disappearance, a fate that the UN General Assembly has repeatedly described as “an offense to human dignity” and a “grave and flagrant violation” of international human rights law.

Egypt’s interior ministry refused to comment on the allegations when approached by GlobalPost.

According to relatives and rights groups that have monitored the detentions, five of Morsi’s top aides, arrested on July 3 when members of the Republican Guard entered the president’s inner sanctum to announce that his time was up, were kept inside the force's Cairo facility until just this week.

On Tuesday, three were moved into formal prison facilities. Qazzaz, a member of Morsi’s campaign team and his Freedom and Justice Party’s foreign relations secretary, is now being held in Cairo’s notorious Tora prison, along with the former president's media advisor, Abdelmeguid al-Meshaly, and office secretary Ayman al-Serafy.

The charges against the three have yet to be announced, but are expected to emerge over the coming days.

As of Wednesday, two aides remained in the Republican Guard headquarters: foreign advisor Essam El-Haddad and expatriate affairs assistant Ayman Ali. Haddad was a powerful member of the Morsi administration, acting as a key link between the Muslim Brotherhood’s Guidance Bureau — its 16-member executive committee — and the presidency.

Charges against the five have taken months to emerge, and in the cases of Qazzaz, Haddad and Ali, they remain unclear. For Haddad, they include conspiring with foreign groups to commit terrorist acts and divulging military secrets to a foreign state, a charge that Morsi and 34 other Islamists also face.

Other aides, also arrested with Morsi on July 3, have appeared in court alongside the former president. They face charges related to violent clashes outside the presidential palace in December 2012.

More from GlobalPost: Morsi will be tried for conspiring to commit 'terrorist acts'

On Wednesday, one of Qazzaz's relatives awoke to phone calls from a friend who had spotted his name in local media reports.

“The articles implied he’d been moved, along with two others,” the relative told GlobalPost. “We eventually found them in Tora, a high security prison. They wouldn’t let me in, but they did allow a lawyer to enter and confirm that [he] was there.”

Four relatives of the detained aides interviewed by GlobalPost all expressed their lack of faith in the judicial process.

"Over the past six months, they have been detained and kidnapped without trial. Now they are trying to send a message to the international community that this is not the case," said Abdullah El-Haddad, Essam El-Haddad's son and a Muslim Brotherhood spokesman. "I expect to see the same fake accusations, the same sham trials, the same play every time."

Human Rights Watch, which has been following the case since July, when a total of nine of Morsi's closes aides were detained together, has said the conditions under which the men have been held violate international law.

“For a state to fail to acknowledge taking an individual into detention, and to conceal their state or whereabouts, constitutes enforced disappearance,” said Sarah Leah Whitson, director of HRW's Middle East and North Africa Division. “This has been listed in international charters and by the UN as a very serious crime, and an offence to human dignity.”

The aides’ informal incarceration takes place in a political context of widespread popular support for the prosecution of Islamists, particularly those who wielded power during Morsi’s disastrous year in office.

The Egyptian authorities have launched a withering assault on the Muslim Brotherhood since Morsi’s removal, killing hundreds of his supporters during protests and arresting thousands. The public prosecutor routinely renews pre-trial detentions without specified reasons.

“For [the aides] to be transferred out of detention and into a criminal process is normally something that we would welcome, but we are very concerned about due process protections, given what has happened to them to date, including five and a half months of enforced disappearance,” Whitson told GlobalPost.

“In the broader context ... we have serious reason to be concerned over what sort of due process protections they are going to get,” she added.

However, analysts say that the legitimacy of the charges is beside the point. "There has been a coup and so it logically follows that these men will go to prison," said Eric Trager, the Esther K. Wagner Fellow at the Washington Institute for Near East Policy.

"These mounting legal challenges can only be understood in light of the broader political context, in which the military-backed government is in an existential conflict with the Brotherhood, and intends to use every tool at its disposal to win that struggle. The law is one of those tools," he said.

Although the aides remain controversial figures within Egypt, where most of the public supported the military-backed coup that removed the Brotherhood leaders from power, rights groups emphasize that they are due the same legal protections as any other citizens.

Until the eventual trials conclude, families of the aides — like those of thousands of other detainees across the country — remain in limbo.

Several have left the country, fearful that they too will be targeted. Abdullah El-Haddad, the only family member who agreed to speak on the record, has moved to London.

He now acts in exile as a spokesman for the Muslim Brotherhood. Scholars who monitor the group believe it is trying to reconstitute itself within the safer confines of European and Gulf capitals, hoping to eventually gain back influence in Egypt.

Other relatives — especially wives now living as single mothers — have stayed behind to look after their families. Shocked at the fate that has befallen their once-powerful relatives, they have faced the difficult task of being left to hold the fort alone.

“I have four young children and I have been a single mother for [six months] now. It is very difficult to explain to them where their dad is. They don't understand what is going on.”