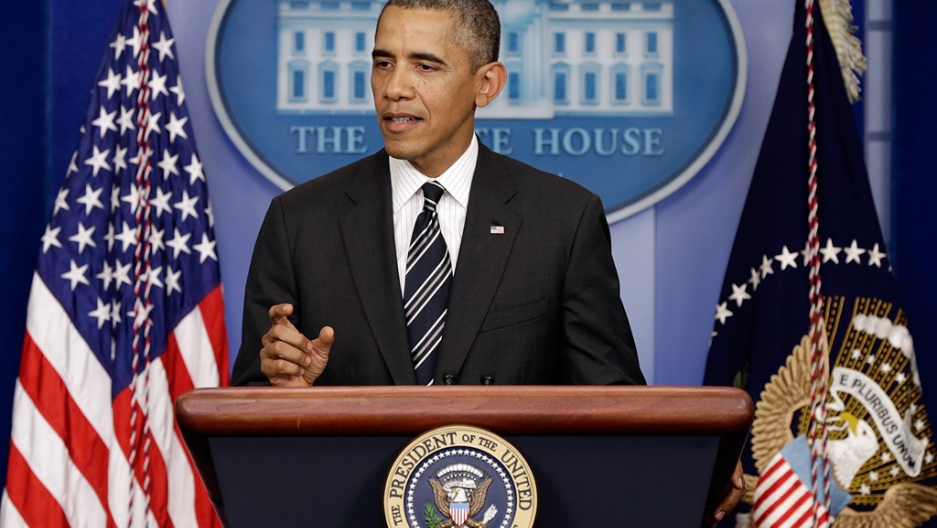 President Barack Obama went on the defensive Friday during his last press conference of the year.

He opened his remarks with, "It's the most wonderful press conference of the year."

That's right about where the wonderfulness stopped.

The first year of Obama's second term has been marred by declining approval ratings and controversies surrounding the rollout of his health care law and the National Security Agency's mass surveillance program.

While Obama's prepared remarks focused on America's economic progress and increasing energy independence, he faced many questions on the health care rollout and the NSA.

"I firmly believe that 2014 can be a breakthrough year for America," Obama said, before taking questions.

The very first question, from the Associated Press' Julie Pace, was whether Obama considered 2013 the worst year of his presidency. He responded by saying he wished Congress had acted more aggressively on certain issues, while listing his accomplishments.

"If I was interested in polling, I wouldn't have run for president," Obama said, after Pace noted, "When you talk to Americans they seem to have lost confidence and trust in you, your credibility has taken a hit."

Obama was also pressed on the NSA, and said, "I have confidence that the NSA is not engaging in domestic surveillance and snooping around."

"Just because we can do something doesn't mean we necessarily should," Obama said regarding the NSA's methods. "This is only going to work if the American people have confidence and trust."

He acknowledged that people were concerned about the prospect of the NSA abusing its power, but said there is no evidence of such wrongdoing.

An internal audit leaked by former NSA contractor Edward Snowden in August, however, showed that the NSA violated privacy rules.

Obama criticized the way Snowden's revelations about the NSA had been published in "dribs and drabs," calling them "damaging" to intelligence and diplomatic efforts.

Obama said there was "no need for new sanctions legislation" on Iran, while negotiations were still an option. "The politics of trying to look tough on Iran are good when you're trying to run for office or in office," he said, adding that it was time to see if negotiations could work with Iran.