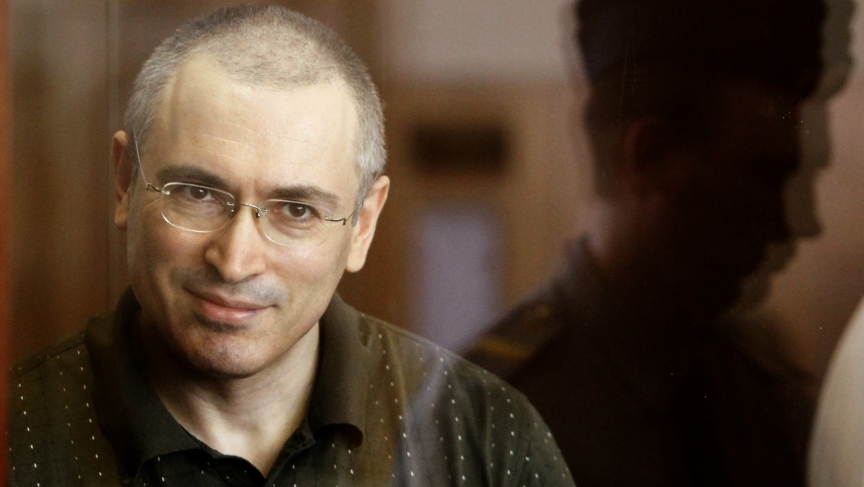 Today, Russian political prisoner and former oil tycoon Mikhail Khodorkovsky wished his friends a Merry Christmas and a Happy New Year. And he didn't do it from inside a prison.

After more than a decade behind bars for fraud and tax evasion, Khodorkovsky was released from Penal Colony No. 7, 200 miles south of the Arctic Circle.

Khodorkovsky was one of Russia's richest men when he was arrested in 2003 on fraud and embezzelment charges. His has widely been considered a case of Russian leader Vladimir Putin using his power to silence a political rival and critic.

Still, Putin said he would release Khodorkovsky, and today he did.

First photo of my dad out of jail in 10 years pic.twitter.com/FMCFyGt8fn

Khodorkovsky immediately flew to Germany where he was reported to be meeting his mother. She's been receiving medical treatment there.

"I am very much looking forward to the minute when I will be able to hug my close ones and personally shake hands with all my friends and associates," Khodorkovsky wrote in a statement released on his website Friday. "I am constantly thinking of those who continue to remain imprisoned."

His son, Pavel Khodorkovsky, excited and slightly dumbfounded, set off from New York City to Germany today to meet with his father.

@dtboyd thank you! The last 3 weeks have been surreal, now my father is free, very happy time in my life

Many see Khodorkovsky's release as a move by Putin to improve his image on the human rights front, especially with world attention turning to the Sochi Olympics in just a few weeks.

David Hoffman, the author of "The Oligarchs: Wealth And Power In The New Russia," said reaction in Russia to this case isn't always as you'd expect.

"Khodorkovsky is no hero in his own country," said Hoffman "For a long time, when the oligarchs were rising people were very envious of these guys."

"In the year-and-a-half or two years before his arrest, Yukos [his oil company] was becoming more transparent and more westernized than any other oil company in Russia," Hoffman said. "So he was trying to show the direction they needed to go."

In that sense, Hoffman said, his vision for Russia is aligned with the young people who took to the streets in recent years to oppose Putin. But that doesn't mean he will suddenly be embraced by the opposition. These protesters rose up while Khodorkovsky was in prison.

"They were just kids when Khodorkovsky was rising up. He wasn't on the barricades," he added

Hoffman hesitates to guess what's next for Khodorkovsky. But he does remember a moment 10 years ago when he met with Khodorkovsky before he was imprisoned. Hoffman asked the oil baron why he didn't just leave Russia and live in exile. Khodorkovsky said he wasn't one to run.