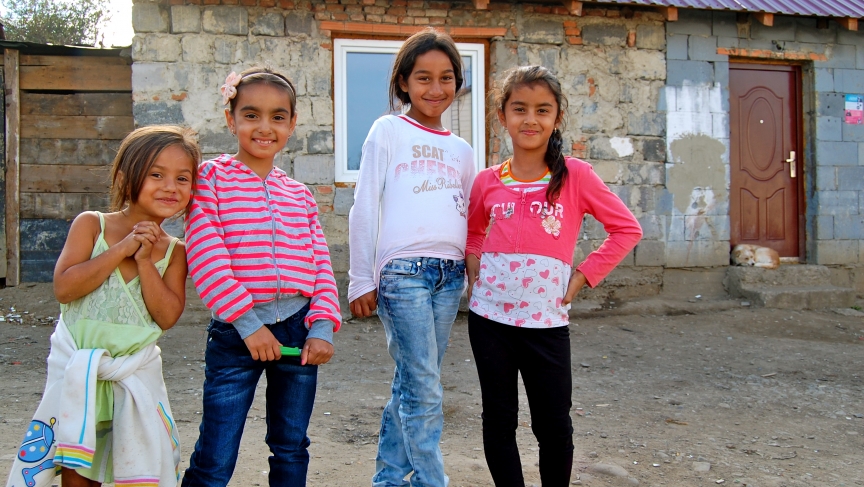 Until this past September, the school in the small Slovak village of Šarišské Michaľany had been segregating its Roma — or ‘Gypsy’ — children from non-Roma students.

It's a common practice in Slovakia, and a growing trend. Looking to spark dialogue and take a symbolic stand, the country’s Center for Civil and Human Rights took this school to court. Šarišské Michaľany wasn’t chosen because it was unique in any way. In fact, it was chosen because the school’s make-up and size were completely typical.

In a landmark ruling last year, a Slovak court found the school to be violating Slovakia's anti-discrimination laws, and the school was ordered to integrate its students. In one of the first concrete steps principal Jaroslav Valastiak took toward promoting equality, the school hired its first Roma employee.

She’s not a teacher, but a teaching assistant. Her name is Monika Duzdova, and she runs an after-school study group for Roma students having difficulty keeping up with their new, white classmates.

Duzdova is excited about the court ruling and optimistic about the future of these children. But she says their success is dependent on one critical element: support and encouragement at home.

“I will be critical to some Roma, because they’re not motivating their children enough," she says. "They don’t help themselves to make their lives better. Until the minds of Roma parents change, no integration or inclusive education will ever help."

She says while some Roma parents cooperated with the civil rights lawyers on the case and expressed triumph and optimism after the ruling, their enthusiasm wasn’t uniform.

“To the people who don’t know about the Roma issue in Slovakia, it may seem that there are just two groups going against each other,” she says. “But that’s just not true.”

Duzdova represents a small group of Roma who live inside the borders of Šarišské Michaľany. She’s made a concerted effort throughout her adult life to assimilate and integrate with her non-Roma neighbors, and has largely been successful.

But the majority of the Roma live in a segregated settlement on the edge of Šarišské Michaľany, called Ostrovany.

While she feels a kinship and connection to the Roma in Ostrovany — many of her family members still live there — there is obvious tension.

“Roma who live in big settlements live in their own world. They live at the edge of society — and it makes them lose motivation. They lose interest in the outside world,” Duzdova says.

The settlement is just a few miles from town, but feels a world away.

It’s crowded and claustrophobic. The smell of burning garbage hangs heavy in the air. The United Nations Development Program estimates that roughly 40 percent of Slovakia’s Roma live in settlements like this. There are nearly 600 of these settlements, usually perched on the edges of villages or towns.

Most of the houses in Ostrovany are made of wood and corrugated metal, and it seems that the sturdiest structure is the 500-foot long wall that runs along the settlement’s perimeter. The city’s mayor had the wall built in 2009, at the behest of nearby, non-Roma residents who complained that Roma children were stealing food from their gardens.

Viera Duzdova — who is not related to Monika — has lived in Ostrovany her entire life. Her son, Faro, was just integrated into a mixed ninth-grade class in Šarišské Michaľany, and she bristles at the notion that parents in the settlement aren’t trying hard enough to help their kids.

Viera’s friend, who declined to give her name, is quick to pipe in.

“It’s hard to live here,” she says. “We don’t have work. We’d like to work, but we can’t because we just have no chance of getting any job.”

Before this year, Roma parents weren't allowed inside the school in Šarišské Michaľany. If they wanted to talk to the principal or teachers, they would have to speak through a glass security window, just outside the school’s front foyer.

While this policy changed after the court ruling, Viera admits she still hasn’t been to meet her son’s teacher. She says she still doesn’t feel welcome. Not just at the school — but basically anywhere outside of Ostrovany.

Most young Roma seem to be taking the integration process in stride, but 16-year-old Peter says not all students who have been offered the opportunity to integrate have done so.

Even though Peter is excelling alongside his new, white classmates, he says he wouldn’t want his own children to experience what he is going through. “I would put my kid in a Roma-only class,” he says, “[because] I think he would feel better there. And I think he could still be good in his studies because I would tell him to not care about what his friends are doing.”

Peter drops his voice and makes a quiet admission.

“I miss the Roma-only class,” he says, with a sigh.