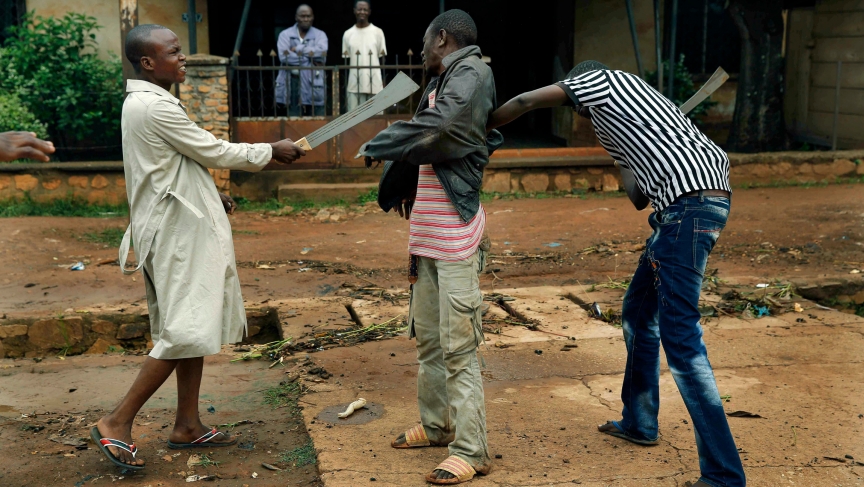 Muslim men in militias with machetes rough up a Christian man while checking him for weapons in the Miskine neighborhood of Bangui, Central African Republic.

It was an example of US diplomacy in the Central African Republic (CAR). The US ambassador to the UN, Samantha Power, made a surprise visit to the former French colony on Thursday.

Earlier this month, France sent 1,600 troops to join 3,500 African Union soldiers in an effort to stop clashes between Christian and Muslim militias. But to date, the US has limited its role to just providing transportation — and has insisted it won't send in US ground troops.

In the national capital of Bangui, Power met with politicians and visited a hospital filled with injured civilians.

"The tales that we heard of the horrific abuses that have occurred in recent days were really spine chilling," Power said. "We met with one woman, this is an example, whose husband was stabbed to death in front of her very eyes and then covered with gasoline and then lit on fire. And this is the kind of brutality that has been committed in pockets of the country in recent days and, of course, to a lesser extent over the course of the last year."

Jerome Delay, the chief Africa photographer for the Associated Press, has been capturing that brutality in pictures.

He's been based in South Africa for eight years, but passed on covering the death of Nelson Mandela, because of the importance of what's going on in the CAR.

He stayed — and he has taken some incredible and disturbing photos.

In between those two groups are French soldiers.

One of the most shocking photos Jerome Delay took is of a man holding up a knife and lunging at another man, while a crowd in the street watches the attack.

"The crowd was a Christian crowd and somebody pointed out a man saying that he is a Seleka, or an ex-Seleka colonel," Delay said. "The crowd just went and started to lynch him. This man just took a knife and tried to take a stab at him. The French did intervene, shooting warning shots in the air and then grabbed the man. What they did actually was quite smart — they made it look like they were arresting him, so they put cuffs on him and took him away. I learned the next day that the man had been released and was safe."

Another powerful picture shows a makeshift camp at an airport in Bangui. It shows families drying their clothes on the tops of planes and finding shade from the heat under the wings of a plane. Delay says there are now more than 40,000 people living at this airport camp. And every day, more people flee the fighting.

"I think that you know, all the ghosts of Rwanda are waking up," Delay said. "It's very, very difficult to bear sometimes."