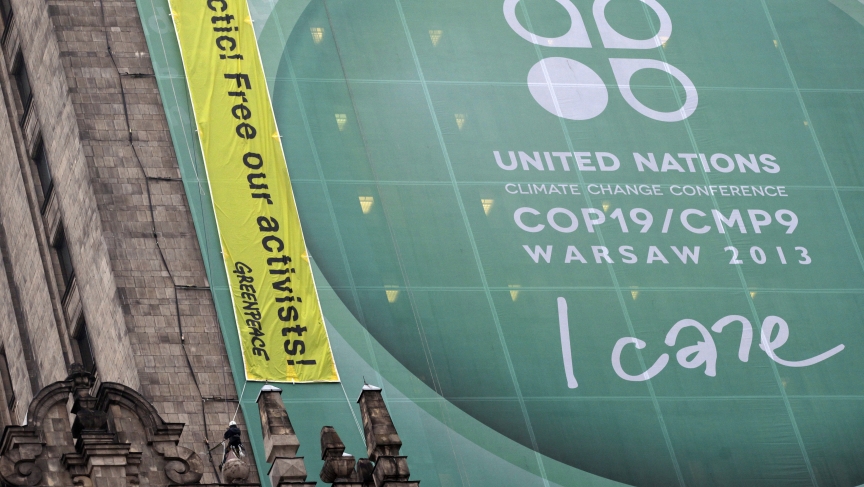 Greenpeace activists fix a banner on the Palace of Culture and Science demanding protection of the Arctic region and the release of the so-called "Arctic 30" group during the 19th conference of the United Nations Framework Convention on Climate Change in Warsaw November 21, 2013.

Russia seems poised to free the Greenpeace Arctic 30 protesters this week... and they'll be joined by the two imprisoned members of the band Pussy Riot.

The Russian Duma voted unanimously to extend amnesty to all those charged with hooliganism, including those detained while protesting an arctic oil drilling rig and the band members who staged a protest in a church. The amnesty bill mainly applies to first-time offenders, juveniles and women with small children, and at the last minute was expanded to put an end to the two controversial criminal prosecutions, according to The Guardian, apparently to defuse criticism of Russia's record on human rights in advance of the Olympics in Sochi.

Is South Sudan spiraling out of control?

US officials evacuated more than 100 diplomatic personnel from the embassy in Juba, South Sudan, overnight as violent clashes in one of the world's newest countries escalate.

The violence was triggered when the nation's president sacked the vice president in July, claiming he was part of a planned coup. The country threatens to fracture, again, along ethnic lines, though President Salva Kiir says he is open to talks to resolve the crisis. According to Reuters, at least 500 people have been killed and thousands have fled to the protection of UN refugee camps.

There's a citizen-led movement afoot in Europe, and it has nothing to do with income inequality or government corruption — it's all about quiet. And nowhere is that more on display than in Paris, where influential citizen groups have been successful in getting loud bars and clubs to quiet down, or shut down. PRI's The World has the story from the French capital.

Americans have it tough going into the World Cup

Americans have been grumbling ever since they saw the competition in Group G of the World Cup. They have complained that the US had one of the toughest draws around.

Turns out they were right. A new analysis by The Guardian looks at the 32 World Cup teams and finds that only two — including Ghana, which is in Group G with the US — have tougher competition than the US. Occupying the top slot is Australia, in Group B, followed by Ghana and the US.

Costa Rica has cultivated a reputation as a green and eco-friendly tourist destination — and has laws aimed at stopping the mass killing of sharks to harvest their highly-prized and highly-priced fins. Shark finning, at its worst, involves catching a shark, cutting off its fins and throwing the rest of the body, alive, back into the water. PRI's The World reports that illegal shark finning practices continue in and around Costa Rica, and that the institution tasked with overseeing fishing is dominated by those in the fishing industry.

If it does anything for you — from spurring a smile to increasing your cred on Twitter or at dinner parties — please visit PRI.org/give and make a donation. You'll give us a vote of confidence and support non-profit, public media.

How decoding a picture of the North Korean elite shows power shift after purge http://t.co/gg0nyexNBN

Yaral'in, Russia, is in the midst of a heatwave — though not a heatwave most of us in the continental US would recognize. Yaral'in is in the heart of Siberia and has a typical high temperature this time of year of -23 degrees Fahrenheit. That would be the high. But on Tuesday, according to AccuWeather, the city reached a balmy 24 degrees Fahrenheit — still below freezing, but nearly 50 degrees warmer than normal. 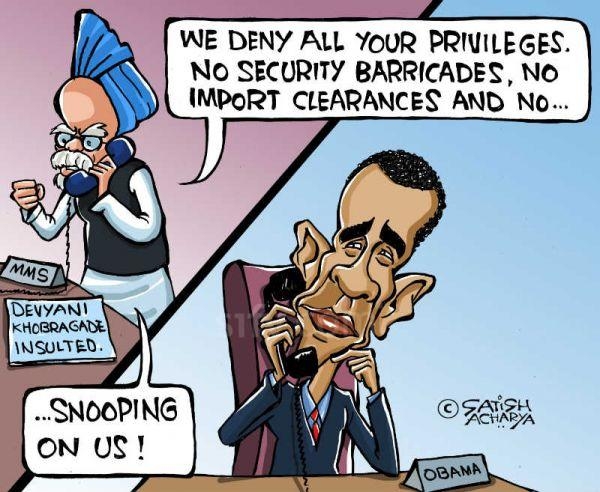 India's Satish Acharya captures the outrage in Delhi over the arrest and strip search last week of an Indian diplomat in New York. Devyani Khobraga is out on bail but she's being charged with underpaying her nanny. India is threatening retaliation against the United States. The man pictured in the cartoon on the phone with President Obama is Indian Prime Minister Manmohan Singh.