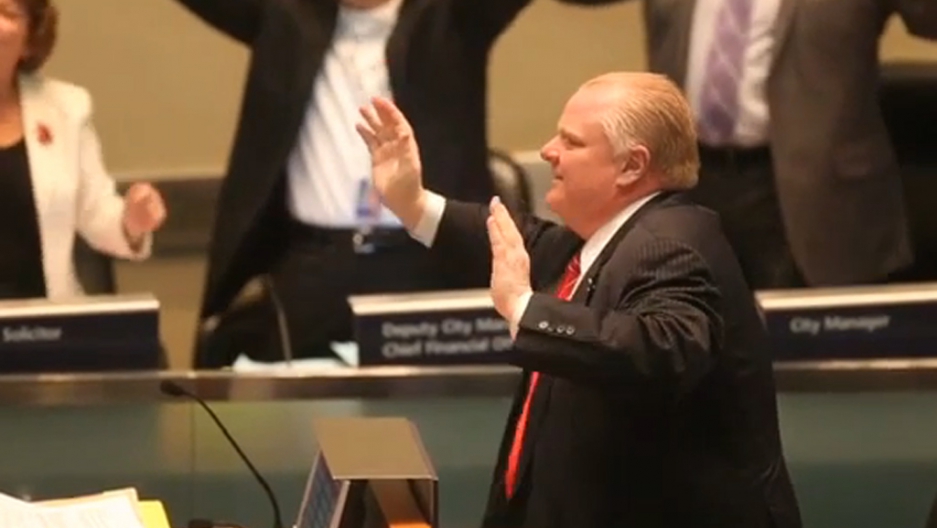 A screengrab from a video showing embattled Toronto Mayor Rob Ford in the middle of a bizarre dance break during a city council meeting.
Share

Still in the throes of a crack cocaine scandal, Toronto Mayor Rob Ford put on his dancing shoes and cut a rug in what can only be described as a bizarre dance break during Tuesday's city council meeting.

Ford was caught on camera boogying down to Bob Marley's "One Love" just minutes after a heated confrontation with a council member.

Displaying surprisingly agile moves, the mayor was joined by several city councilors bureaucrats who kicked up their heels to a performance by a local jazz trio, the Toronto Sun reported.

Fresh off a heated exchange with Ford, McConnell watched the scene in disbelief.

“Right now, under the kind of microscope that we’re under, it just seems to me that we’re not taking it very seriously, the whole world is looking at us,” she said. “Now being able to show the Toronto city council boogying around instead of doing business just feeds into that late-night show comedy act."

The dance party came as a Toronto Star reporter rejected an apology by Ford and announced he was proceeding with a libel lawsuit against him.

Daniel Dale claims Ford insinuated he was a pedophile during a TV interview last week.