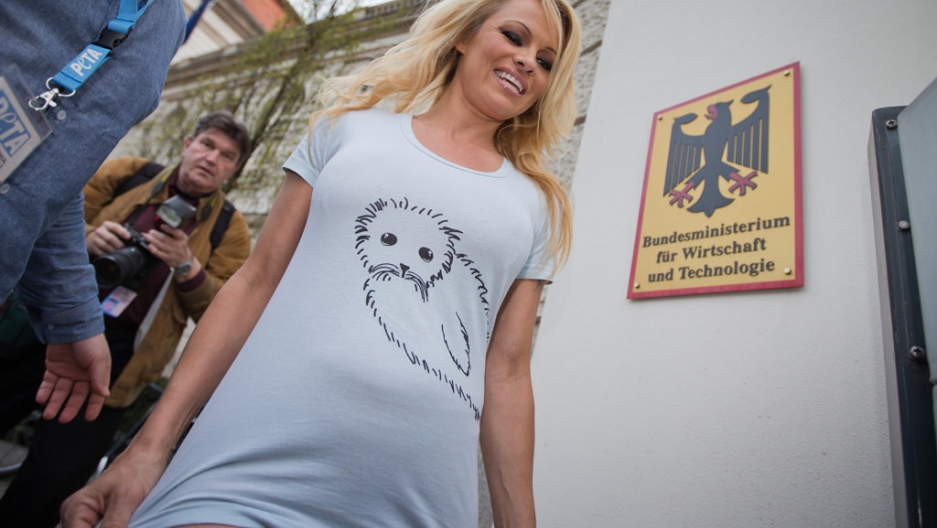 Actress Pamela Anderson arrives at the German Economy Ministry in Berlin on April 19, 2012, to deliver a petition against seal hunting on behalf of People for the Ethical Treatment of Animals.
Credit: MICHAEL KAPPELER
Share

Regardless of how hard they tried, nobody wanted to accept $1 million from Pamela Anderson and Sam Simon, co-creator of The Simpsons, on Tuesday in St. John’s, Newfoundland.

The pair landed on The Rock to offer fishermen money to end the seal hunt, but there was nobody working at the union office where they chose to stage a frantic press event.

Worse still for the Hollywood duo, sealers outside the building jeered and peppered them with questions as journalists recorded it all.

“This is realistic attempt to end a horror show that shouldn’t be taking place in the 21st century,” Simon said when the crowd stopped yelling. “We’re here with an incentive to help workers and spare animals.”

Simon, who is giving away millions after a cancer diagnosis, said the money is designed to help sealers find new careers much like what happened with asbestos miners or tobacco farmers.

The European Union has banned the products, and the Newfoundland government spent $3.6 million last year on a bailout package.

“Take your insane group, and go away,” he added, CBC News reported. “All of this is a media event, a stunt, to provide a YouTube moment for fundraising for animal rights. That’s all it is.”

“We’ve all seen the cruel videos, Barb Wire, Bay Watch Nights, Barbarella,” he said, according to The Telegram newspaper.

“Stripperella, sorry, thank you,” he said after Anderson corrected him. “They make me embarrassed to be a Canadian.”

Anderson, a People for the Ethical Treatment of Animals ambassador, has long said the seal hunt has made her ashamed to be Canadian.

Critch, who stars in a satirical news program, said Simon’s money would amount to $165 per fisherman, and asked Anderson if she would give up her career for that amount.

The sealing industry is under attack, and markets are shrinking across the globe as a result.

Much of the backlash is in response to graphic videos showing hunters clubbing docile baby seals and dragging their bleeding carcasses across ice floes.

But those notions are outdated, the industry says. Fishermen continually remind animal rights advocates that hunting white-coated seal pups has been banned in Canada since 1987.

They also say harvesting seals is no different than the beef, pork or poultry industries.