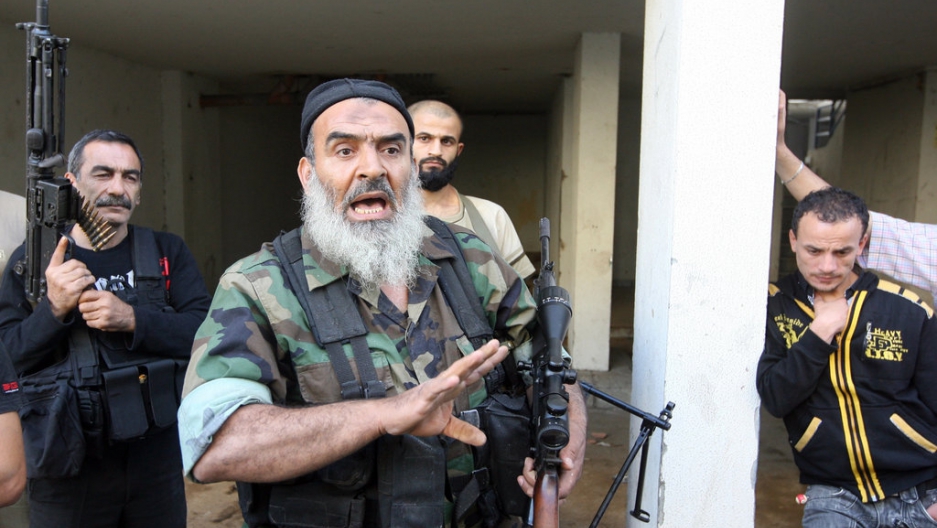 Sunni Salafist gunmen, who back the Syrian opposition, are seen in the northern Lebanese city of Tripoli on May 23, 2013.
Share

DAMASCUS — Some extremist Sunni clerics help foment sectarian violence in Syria, one indication of how a popular uprising against President Bashar al-Assad’s government became a civil war. Both sides use religion to justify their grab for power.

"Every Muslim trained to fight and capable of doing that [must] make himself available," he said at a rally in Qatar where he lives. Qaradawi, an influential cleric, has an estimated 60 million viewers for his Al Jazeera TV show.

He formerly supported Hezbollah's fight against Israel, but now attacks the group for sending fighters to Syria. He mockingly referred to Hezbollah's name, which in Arabic means "party of God."

“The leader of the party of Satan comes to fight the Sunnis," he said. "How could 100 million Shiites defeat 1.7 billion [Sunnis]?”

Sheikh Abdul Salaam Al Harash, a representative of the Muslim Scholarship Association in Syria, strongly disagreed with that view. He's a pro-government cleric living in Damascus. When the fighting first began, Harash said, it pitted government supporters against opponents.

But Sunni governments in Saudi Arabia, Qatar and Turkey have thrown support to the rebels. "The conflict has taken on a religious character,” he said.

Harash brings an unusual perspective to the issue because he described himself as a Salafist, an ultra-conservative religious trend most often associated with extremist rebels. Salafism arose among Muslims in the later 1800s as a reaction to western philosophies and colonial expansion. Believers practice a strict interpretation of Islam but do not necessarily involve themselves in politics.

Most Salafists worldwide reject violent extremists who kill civilians in the name of Islam and anti-imperialism. Harash, for example, believes in a fundamentalist interpretation of the Koran, but accuses rebels of distorting Salafism when they attack the Assad government.

“The religion hasn’t changed, but the Muslims have,” he said with a chuckle. Harash's religious views are similar to conservative evangelical Christians in the US who also favor immigration reform.

They see no contradiction between conservative religious views and liberal social policy. Harash said the Assad government represents progress for women and religious minorities in Syria. “We support development and social equality, not like in Saudi Arabia where women can’t drive.”

He rejected the idea that the US and western countries support moderates who want a liberal, democratic government in Damascus. He said the US is willing to deal with anyone. "The US wants a pro-US strongman in power," he said. "Is creating a McDonald’s culture worth all this bloodshed?”

GlobalPost special correspondent Reese Erlich's reporting from Syria was supported in part by a travel grant from the Pulitzer Center on Crisis Reporting. Erlich's book on the Syrian uprising will be published by Prometheus Books in the fall of 2014.